Already in the run-up it was foreseeable that the selection of bands on this over one-month tour would guarantee packed concert halls…..
And that’s exactly what happened. The Colos hall in Aschaffenburg was already well filled shortly after admission and when the Finns Horizon Ignited entered the stage, the extremely talented band was able to open the evening in front of a stately backdrop. The guys around vocalist Okko Solanterä played from the first minute on very confidently and presented the audience in Aschaffenburg with powerful and technically skilled Melodic Death Metal. This immediately brought the audience to side with the band, which knew how to convince over the entire length of their performance. Very strong performance of the likeable guys from Finland; I am sure you will hear from them in the future.

After a relatively short break, it was The Agonist from Canada, who continued to create a powerful atmosphere. With Vicky Psarakis they have a real capable vocalist who knows how to impress and inspire with her brute death metal shouts, mixed with clean vocal passages, giving the band’s compositions a unique stamp. The rest of the band impressed with a good interaction and the audience celebrated The Agonist mightily. After Vicky got the fans in the mood for the rest of the evening, the Canadians were bid farewell around 40 minutes with much applause.

Now it was the turn of the well-known Septic Flesh and every fan knows their intensity, power and melodic variety, the Greeks know how to convince. From the current album “Modern Primitive”,  the unique “Hierophant” and “Coming Storm” stood out especially. The fans thanked the musicians with unconditional, loud support and there was a lot of movement in the crowd. Septic Flesh are simply a powerhouse live and “Pyramid God” underlined this more than impressively. Singer and bassist Spiros had the fans under control from the first second. His deep growls, paired with recurring clean vocals, created intensity and goosebumps moments at the same time. Very strong performance by those Greeks and the fans were now properly tuned into Hypocrisy. 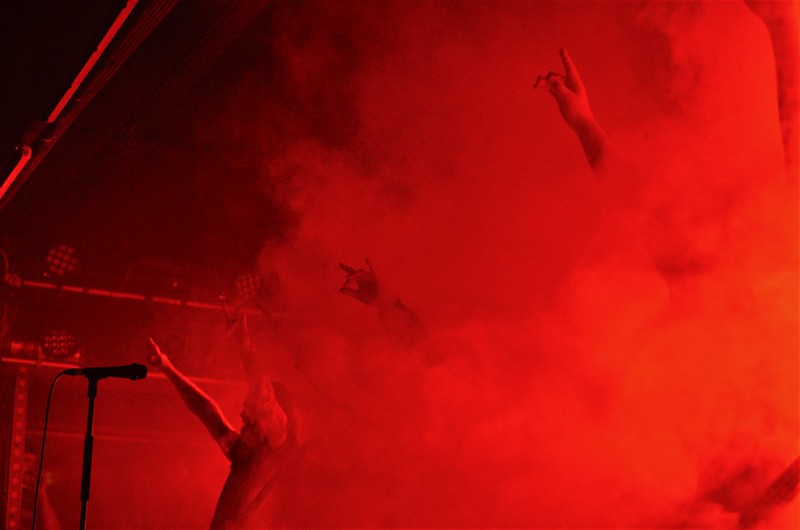 When the stage was covered in mystical light after the break and the new session drummer Hendrik Axelsson greeted the fans during the intro, the audience got loud. Hypocrisy opened their set with “Worship” and you could literally feel how Peter Tägtgren and his men created a special atmosphere with their presence alone.
As for the music, there was the quality that one knows from Hypocrisy: An almost perfect interplay of the individual musicians created a brilliant listening experience and the band was constantly on the move on stage. Bassist Mikael Hedlund and guitarist Tomas Elofsson were always eager for contact with the fans and often changed sides, Hendrik Axelsson drummed precisely like clockwork, despite a short preparation time for the tour, and Peter Tägtgren impressed with his varied vocal style and powerful guitar playing.
With his announcements Mr. Tägtgren provided relaxed moments again and again, before the band then shot off more hits like “Eraser” or “Chemical Whore” into the audience. The fans were more than grateful and gave Hypocrisy a lot of applause. My personal highlight of this evening was “End Of Disclosure”, which created a powerful atmosphere. With “Warpath” & “Adjusting The Sun”, Hypocrisy underlined their special position in Melodic Death Metal and the reaction in the audience was again enthusiastic. “Roswell 47” ended the gig that many will keep as everlasting memory. One can only hope that Hypocrisy will stay with us for many more years.

A long evening with great bands was over and the fans went home feeling satisfied. Thumbs up for Horizon Ignited, The Agonist, Septic Flesh and Hypocrisy !!!

The Blanko / Cherry and the Vipers