A person is fighting the parking stand interface near Jäähalli, and under a modern jacket I can see a historical reenactor’s outfit. There will be more of the face-painted, horn-wearing audience members tonight. Even if it will be probably completely dark in the Black Box Jäähalli gig (where all the sides are covered in black fabric), Heilung fans feel like they should be dressed accordingly. Even a bearskin and a fox headdress were spotted (and our editor-in-chief ran into one of them, see our GALLERY).

The evening was opened by Lili Refrain, an Italian musician who sounds very close to Nordic Folk. She performs alone, recording her instruments into a loop station live to become her own accompaniment. It is a hard task to perform alone in front of an arena and especially before a band that is known to entrance the audience. Unlike some gigs, where one has to survive a warm-up scrambled by the promoter from the local area and loosely matching the headliner’s genre general direction, Lily fits right in. She is solemn yet expressive, making the most out of her solo appearance with her stage face painting and gestures. 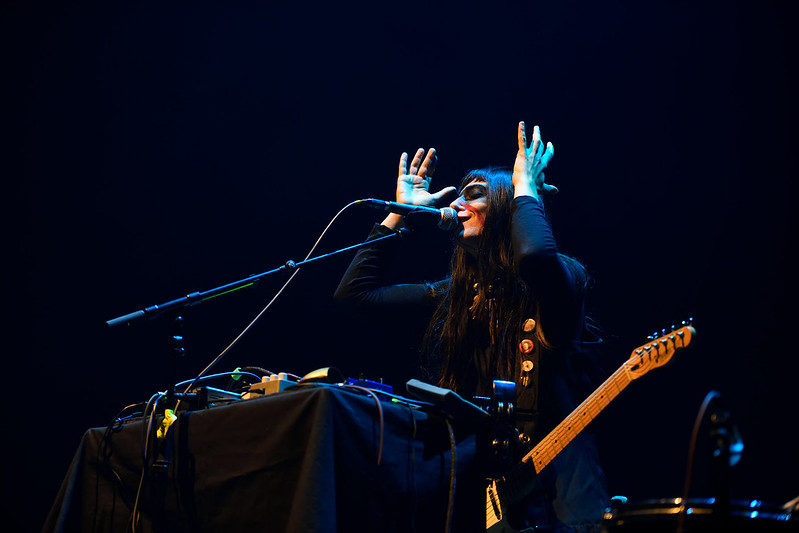 Next, Eivør – a well-known Nordic folk author from the Faroe Islands. While being prominent in the scene for a while, in the last few years her career was further supported by co-authoring the OST of the Netflix Viking series “The Last Kingdom” (having seen some of the episodes, where the protagonist does sporadic unnecessary violence, I now believe that the OST is the best part of the show). Half of the setlist consisted of the compositions from the series. Her music is, maybe, less “tribal” than Lily’s and Heilung’s and features more modern synth effects, but the overall mood and lyrical themes work well with the same mood. 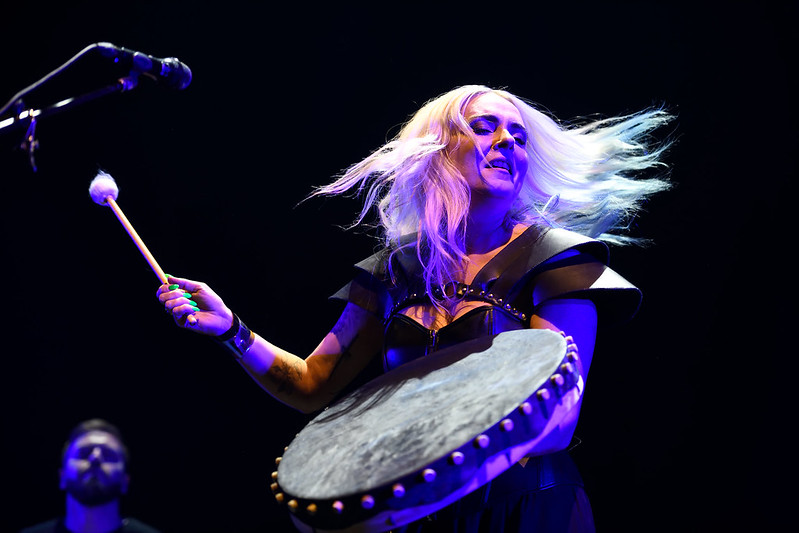 Heilung actually visited Helsinki the second time this year, but this time it is a new ‘ritual’ that comes after the release of the third album Drif. Having seen Heilung live in 2019, some things changed – the show now is more orchestrated, there is a more intricate sound thanks to the additional singers (Mira Ceti, Emilie Lorentzen, and Annicke Shireen) and it is beautifully lit. On social media, band members especially compliment the light show made by Kilian Keuchel of Lifelight design. Even before the show starts, you can see what is to be expected – there are projections of “Heilung symbols” on the black curtains surrounding the arena. When the show starts, these projections become grander and more apparent, covering everything from the backdrop to the ceiling over the audience. 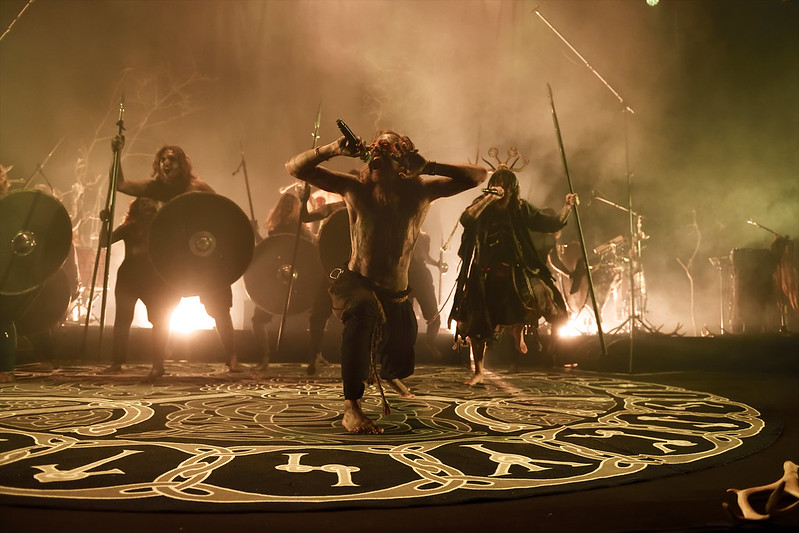 The ‘ritual’ itself is an undeniably very strong experience and draws the audience in fully. If the warm-ups can be classified as a more or less traditional performance of separate compositions, Heilung, while delivering a very neat “show”, is not about the show itself and not about singing along like on a rock gig. Of course, visually it is stunning and it just gets better with the years. And the band does encourage to sing along. Still, for me, it is more about meeting something inside my inner self while being immersed in Heilung’s compositions, from solemn to happy ones. The ritual is not a set of songs, but a continuous experience, the band does not speak to the audience and does not play encores. Instead, the feelings you get from being there might as well burn you throughout if you are immersed enough.

The ritual starts from the more spellbinding pieces – such as Krigsgaldr – and ends with a long Hamrer Hippyer, where the entire crowd on stage becomes a merry-making mess, stage-diving included. It is customary for a band to use a lot of new material on tour, but Heilung, again, deviates from the common pattern here. If we trust setlist.fm, only Anoana, the favorite track of Maria Franz from the Drif album, is performed, while the majority of songs are still from the second album, Futha (2019). Is it because the show should be more geographically tied to the North than the album (which goes as far as Assyria, or modern Iraq)? Or the band decided to leave room for change for the forthcoming shows? I’d bet for the latter – Heilung does take time to make new records, and perhaps new compositions need to be laid out choreographically, which also takes time.

I was spellbound when I saw Heilung for the first time and there was a concern, will this effect reoccur for a third time? Actually, it did. Nothing else needed for me. Great concert.

Nightwish: On A Dark Winter’s Night