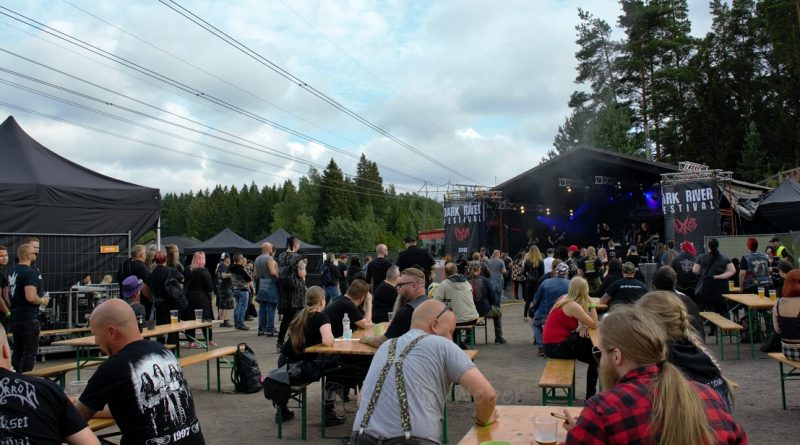 This year the smaller festivals in Finland gather many more people – no wonder therefore that Dark River Festival was sold out quickly – a new visitor record with 3000 fans. Yet I have to point out that this festival was on my to-do list in any case, because I have enjoyed this great location, familial atmosphere and compassionate organisation before, privately and officially back then.  Naturally this year there were many more obstacles to overcome, e.g. cancellations due to travel restrictions (those for Sweden are still in place) or accidents changed the billing several times. Well, due to several tour cancellations it’s not that difficult to find a top Finnish Metal act as replacement…

Surprisingly, those additional mandatory safety measures didn’t lead to longer queues – partly because the majority of the festival audience doesn’t arrive so punctually and gradually. And wow, the organizers did create a cozy atmosphere despite all that – ample space on a 3x bigger area with 2 stages than I remembered from last time, many benches and tables to establish distances – not just in the VIP area. Well, for Finns social distancing has always been part of the culture anyway. A mask came with every ticket, many brought their own designs (like me) and “käsidesi” (hand disinfectant) everywhere. Ample space in the photo pit too, friendly crew and room for the journalists in the production office, plus food & coffee/water (which is not the case at every festival). So welcoming, hence a big THANK YOU for the organizers & entire crew here! 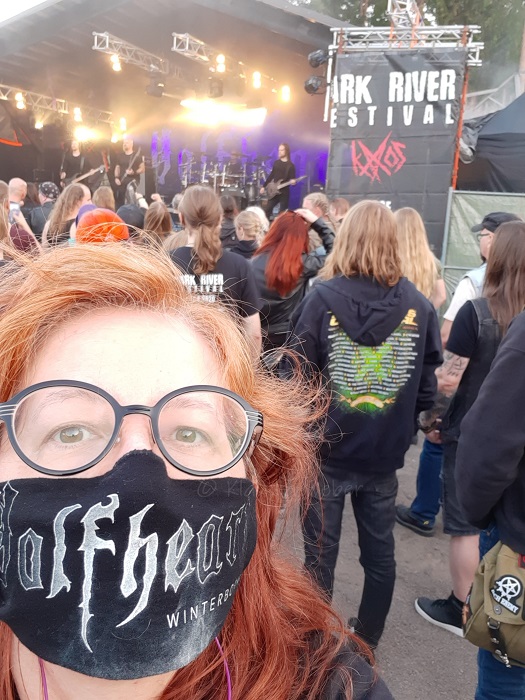 The melancholic tone of Kaunis Kuolematon did not quite fit to this sunny summer day. I cannot remember which “fitting” song title it was that had the guys on stage chuckle, too. During their set many more people dropped in to celebrate the festival opening act. Although there was still room, several fans secured their front spot for Fear of Domination long before the show – and yeah, this band and their Industrial Metal kick off the party mood. And their outfits are super photogenic…

Slowly the area fills up also at the second stage where Asim Searah (eg. Wintersun) provides 2 sets of acoustic covers plus some deep philosophical insights. He could start another schtick as stand up comedian… By the way, during the festival the barber / hairdresser van did attract some customers.

And in case people were confused by seeing the same faces over and over again – nope, no sunstroke, Kaunis Kuolematon singer/guitarero Mikko Heikkilä is also the Dawn of Solace front man. I was very pleased about the addition of this band as their gig at John Smith Festival was cancelled with the festival… This was actually only the second “real” gig of this band in their entire career (not counting those small acoustic mini-shows). And yes, I had attended the first one too. WOW, what a surprise, Mikko didn’t just present those from the new album flawlessly but also the old ones, and both clean and growl! Brilliant, hopefully the next gig doesn’t take DOS again 13 years to deliver…
Wolfheart right afterwards were obviously a long awaited audience fave – you could notice all those shirts and hoodies everywhere, and surely they got their mosh pit too. Another festival highlight, in the early afternoon! Basically DOS & Wolfheart mastermind Tuomas Saukkonen (git/voc, for DOS drums) owns the worcaholic rep. Band colleague Lauri Silvonen, though, takes the award for hardest working musician at Dark River – besides DOS and Wolfheart also Bloodred Hourglass next day. In case you wonder why you see the same dude so many times in the photo gallery.

The name of this Kaikkonen & Liekkala duo on the small stage didn’t ring a bell, but when I saw the faces – hey, they belong to the Red Eleven crew, one of my favorite bands! That’s when I knew the next 2 acoustic cover sessions are going to be great, too.
In the meantime the area had filled up to capacity for Turmion Kätilöt and surely those guys proved once again why they have this brilliant reputation. Industrial Metal, black humor, heavy beats – that’s the perfect party mix. On stage the last “double feature” of this day, vocalist Saku, also part of FoD. The major attraction of festival day 1 still was the headliner Insomnium. As expected. First, it was dark enough to pull of a massive light show, and then those guys and their song material are simply top notch. Excellent festival atmosphere indeed! 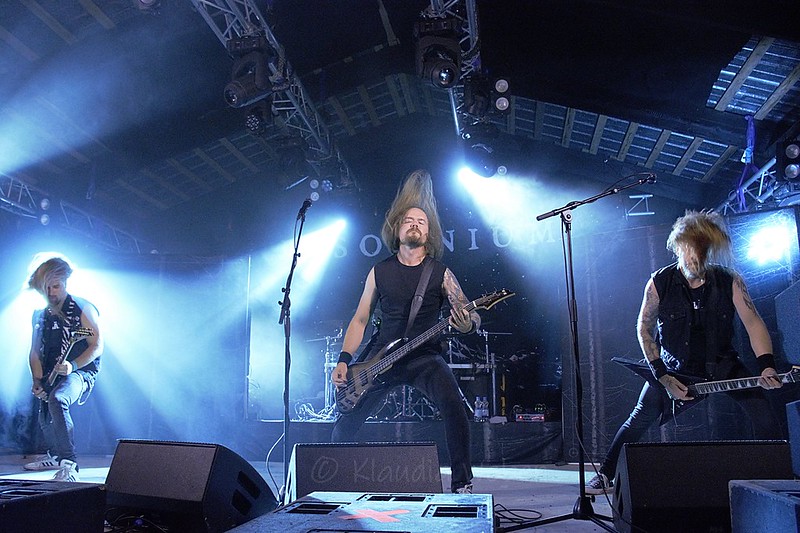 Saturday it seemed that many had celebrated the Friday a bit too much (actually one of the bars didn’t have much left to sell):  Domination Black delivered a great Power Metal gig and people cheered, but hardly anybody was willing to move. Hangover? Or maybe the heat? Admittedly I preferred to stay in the shade too. There was a bit more going on during the Crimson Sun  show – they had left a good impression at the Dark Sarah show too. Singer Sini embodied a „Crimson Sun“ – indeed a bright beam of sunshine on stage.
Then the pit filled up – yet this Alternative/Prog Rock by Wheel is not quite my cup of tea. Still in my opinion it might have been the best gig I have seen of them so far – very engaging and energetic. And I have finally actually SEEN them (and taken pics). Truly inspiring for everybody was probably their “Fuck 2020!” chant… The small stage was taken over by Bryn Jones (Los Bastardos Finlandeses) for highly appreciated acoustic cover sets. Afterwards it was once again time for some more Metal / Thrash Metal with Oceanhoarse, plus mascot, which got the Dark River audience going. The same crowd enthusiasm characterized the  Blind Channel Metalcore show – notably I heard a lot of young females scream the loudest….
The second acoustic act of this day named Vanhala & Aalto were indeed unknown to me. Their acoustic covers of HIM songs were really good – the first steps towards a huge career? In any case they gathered a lot of admirers around them in no time. 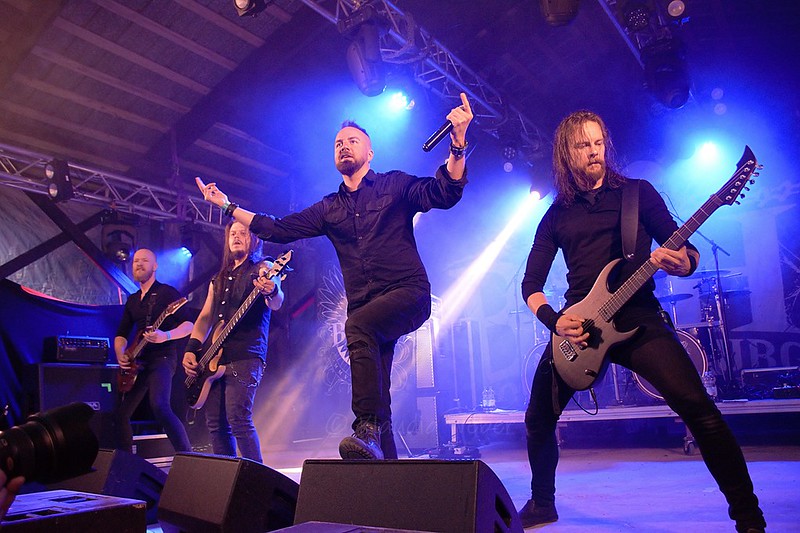 Admittedly this was the act of the day I had been looking forward to, Bloodred Hourglass. No need to say much about this band, they have earned a spot in among the top Finnish Metal exports for a reason. For me this was the headliner of day 2. And once again they played my all-time fave among the first 3 songs. Well, this time there was enough space in the photo pit to rock along a little bit.
Diablo came in with the wrecking ball, a massive sound and even more impressive light show. They truly kicked the butts of all those who are still able to party – which is the best way to conclude this festival.

Summing up, it was totally worth it and in any case the only summer festival for me this year – yet not the only reason why I really enjoyed it. Witnessing all the safety measures the organizers had provided and in general the highly disciplined audience, I do assume that the only unwanted souvenirs from here would be mosquito bites, some headache – for reasons – and perhaps a sunburn… CU next year! 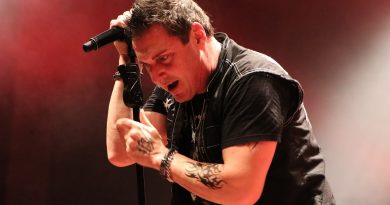