A small but nice festival, great location, familial atmosphere, great billing despite low ticket prices, and not so far from the capital city – let´s go to Dark River Kotka. The only question unsolved should be the weather …

Friday:
There´s not much that can go wrong with a prediction like “unsettled” – for the meteorologists, I mean, as they will be right under any circumstance. For me it meant to prepare shorts as well as a warm sweater, sun screen as well as raincoat – everything was possible.
One of the fantastic additions this year, a really cheap festival bus ride, had to be postponed as the first one arrived a bit too late for press people, namely in the middle of the set of

“Yksin sateissa” – lonely in the rain, as in one of the lines – quite fitting, and not only to the band´s Doom/Dark Metal sound: first raindrops fell right when they started playing. Good that the catering tent was close to the stage, so I could take pics from there – unfortunately my camera isn´t waterproof. Yet this should remain the only rain incident this day.
As for loneliness, this wasn´t quite the case, as some fans had been waiting for this gig, and more people arrived during the gig. Although this year the alcohol-area was in a different location, you could still watch the program on both stages from there. And there was another tent to protect photographers´ gear. Finding a place to sit down seemed mission impossible later on, though.

seemed to be quite popular in this area, as more fans gathered in front of the stage. Surely this Death/Grind/Prog elemental force blows you away – Frans Aalto might not appear to be as scary as his predecessor Keijo Niinimaa, his growls can hold up, though – and I finally got some nice photos of keyboarder Laura Dziadulewicz. You can get an impression of the show with this clip https://www.youtube.com/watch?v=SiUFChvSF3A. After that the second stage was opened by

who entertained the audience with their own Prog Rock/Hard Rock songs and Finnish lyrics as well as with cover songs. A great idea to have local (cover) acts play during the changeover breaks, they all got 2 short sets – and all those acts were pretty good. And it seems no headlining act felt disturbed by this other band playing during their sound checks… and those guys chose to jump around without t-shirts on their own stage later. **

Metalcore – not my cup of tea in general, but I have to say that the show of this band quite nice, the Swedes tried their best to impress the rather reserved Kotka metalheads. Well, after Medeia they did sound like pop music, even when they played their tougher songs in the set. It was a pity that they could not get more crowd going. Nice of the band to join all their die-hard fans in the pit after the gig to thank them for their support.

Did singer Andi Kravljaca have ballet lessons in the past? Besides a flawless voice he also offered some unusual moves for a Metal front man. Don´t get me wrong, I totally liked it, finally something different! This FIN/SWE band had a lot of fun, which naturally translated to the crowd – a likeable act that performed an energetic Symphonic Power Metal show, focusing on their 2nd album Anteinferno.

played Hardrock / Metal classics from AC/DC to ZZ Top. A great voice indeed, not everybody can cover Ronnie James Dio. In this case it would have been useless to shout the Finnish catch phrase “Soittaka Paranoid” (play Paranoid!) – because they did it voluntarily.

were the first act of this evening to lure almost everybody to the pit. And surely, such massive sound and such impressive light show took you over. This mixture of Symphonic Black Metal, Industrial and Melodic Death elements appeals to a wide fan base in Finland, which I had already noticed during their last club gigs. Also here the audience was totally enthusiastic, and I got to say that such a festival live situation seems to suit this band much more than a small club stage – thumbs up!

During this band hardly anybody could be found at the bar in the back… not unexpectedly, Pasi & Co filled the headliner slot gloriously and rocked the Dark River stage as hard as they could, while people screamed on top of their lungs. Besides great music the guys offered great fun, I just didn´t quite get the story about the towels… This best-of setlist naturally contained the “Euroviisubiisi” namely “Face in The Mirror”. Unfortunately some technical problems caused a break – one song had to be left out – but then new drummer Atte Palokangas got the chance to shine in a solo (I captured his flying sticks, check the photo gallery). Great finale of festival day 1! Because I did not want to ride on a jam-packed bus, I decided to leave earlier and missed the encore Will to power, which lasted humble 8min, so I heard…

Saturday:
Is there anything better than a horrible thunderstorm, heavy rain etc etc – and you watch it from the inside of a cosy hotel room which you don´t really have to leave yet, and simply decide to have another nap instead of a sightseeing tour? What incredible luck, right before the first festival bus left the thunderstorm drifted off and didn´t return on this day.

opened the second festival day, and as expected there was not much crowd in the area at this early time yet. Yet this young Thrash band had attracted a quite young fan crowd which also formed the first mosh pit of this day.

The evil sound of DDJ seemed to conjure up evil clouds as well – which was a quite fitting backdrop for this mixture of Doom, Sludge and even Stoner Metal. Cool band, and not boring at all despite the slow-motion riffing. The band – their latest release is called Skygods – also displayed a sense for black humour when dedicating a song to the “church burners”.

When there was not much movement on the main stage before, this should be changed now… Profane Omen replaced For The Imperium, and I was not even upset. Might have been the first gig ever that I managed to get some decent photos of front hurricane Jules… The setlist featured many tracks from the new album Reset, and what else should I write about this band? They are always a blast, and even better when they crown the set with statements like “Can You Festival?” or get people into a mass walkaround (yes, walkaround, not moshpit) … and if there was a “Bizarre Fashion Award” at Metal festivals, they could easily have that one too.

How cruel, those two bands that I had been looking forward the most faced technical problems and cut their setlists – here, after only 3 songs, the question seemed even being “can they continue at all”, as Mika´s amp had given up its ghost. Well, we could enjoy to hear more of mastermind Saukkonen´s voice in speaking mode, although it might still take quite a while to get him into stand-up-comedy. Somehow they managed to get the amp to work for a while (the Han-Solo-method?), Breathe was cut out and thus again I didn´t get to hear the (almost) entire debut album Winterborn in a live situation – but at least Mika managed to wrestle music out of his gear until the last notes of the once again mighty Routa pt. 2 .

were the only band with a “delay” at the festival – surprised by the shortened set, they could not seamlessly continue with their second part of coverversions, e.g. of Deep Purple and Rainbow songs.

The festival host announced them as “ihmistornado” (human tornado) – well, which was a mild understatement. What do these guys have for breakfast, rocket fuel? That show was even more excessive than those I had seen before, at some point the stage was too small for this quartet from Jyväskylä … surely the moshpit hardly ever slowed down, basically only before the Wall of Death… And compared with the rather silent front man before, Samy Elbanna is the very opposite, sometimes speaking so fast you can hardly capture any more than the four letter words … well, it was the last gig of their summer festival tour, that they released their second album Terror Hungry, that Samy had his 18th b-day at Tuska – and for some reason I didn´t quite grasp a “mascot” in red entered the stage. Definitively a highlight of this festival, and a Braindead Thrash Metal band from Finland about to conquer the world!

offered great voice and fine female power, cover versions not only from the rock but also the blues and pop zone (e.g. Amy Winehouse), and also an unusual instrument to be found in the band, an accordion.

A touch of Kabuki in Kotka: I was curious because I had not heard much of this band from Tampere. Visually this Samurai theme was great, and acoustically this combination of Epic Melodic / Prog Metal with Japanese Folk – and also some experimental/jazzy stuff – worked fantastically too. I bet that this gig raised more interest for their recent release Shonugate Macabre; for me those guys are the remarkable discovery of this festival. You can get an impression here: https://www.youtube.com/watch?v=8kysBk4jRQA

This band lured about 1/3 more people to the festival than the day before, because the beer area and the pit were almost overcrowded. And who ever had enjoyed the festival so far – that was about to change, at least this is what singer Kaarle claimed to happen. Well, naturally it didn´t happen, because this Rautalanka Rock/Metal with Finnish lyrics is absolutely entertaining, even when you don´t understand all the lyrics. And they also have those weird cover versions, like Motörhead´s Killed By Death, Kuollut kuin hengetön – Video here: https://www.youtube.com/watch?v=yZPt8XFW6Wg What can I say, great atmosphere, a worthy headliner to round up this year´s festival with a great show. PS: The set started with Minä kuorsan verta – and you can even see here how these live photos were made … https://www.youtube.com/watch?v=LZfznkjH9Rk
Summary: A compliment to the festival crew – great sound even without ear plugs when further off stage, friendly security, relaxed atmosphere, no delays, reasonable prices for tickets, transport and catering – although the non-alcoholic beverages in the beer zone could have been cheaper. More people could have been nice for this festival, yet I hope that Dark River won´t get overflowed and lose its special charme.

** Refers to an incident at Q-stock, the headliner Megadeth insisted on stopping the show of the act on the second stage half-through the set; this artist took revenge afterwards by running on stage half-naked during the Megadeth set… 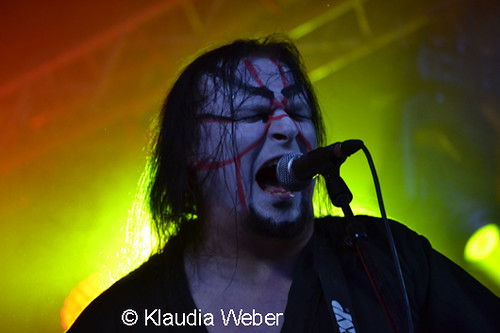