I have been looking forward to this evening with Fozzy, because every time the band had visited Switzerland in the past, I had been out of the country. Now finally I get to see one of my childhood heroes live. Back then I was totally taken by those WWE stars, I owned everything available, sticker albums and action figures of Hulk Hogan, Sting and also Chris Jericho. Yet this evening also belongs to 2 support acts.

Malrun
This Z7 mini production does not offer much space for 5 people on stage, especially when they also have to share it with 2 drum sets. Those young Danes do not quite match Fozzy; although they call their music hard rock, I would rather define it as NuMetal. Nowadays it is quite normal that bands on a tour are not in line musically, as it´s just about who can pay the most. The clean vocals of Nicklas Sonne paired with Ulrik Sølgaard-Nielsen´s growls do a good job, as well as theguitarists Patrick and Mads. Unfortunately not many people are present, therefore those guys have to show their skills in raising the mood. About the middle of their set they manage to draw people to the front and to get the party going. Nice job, despite the style divergence. www.malrun.dk

The Dirty Youth
After a short changeover the only female of this evening enters the stage with her boys, The Dirty Youth from Wales, UK. I am not such a fan of those New Rock Female Fronted Bands a la Paramore, but what I get to hear is quite nice. Front woman Danni Monroe seems likeable, and unlike 99,9% of Metal Ladies she does not wear a dress or hardly any clothes at all. Musically The Dirty Youth are not bad at all, their songs inspire the – mainly masculine – audience. Yet I have to say that after a while the songs seem too similar, as Danni´s vocal lines as well as the song structures do not offer much variety. And their last song, the Rage Against the Machine cover „Do what they told ya“ does not really work out, although the men in the front row are glad that Danni jumps into the audience during her performance. In my opinion a likeable band with a cool front woman and good songs that don´t sound too boring, provided the set is not too long. www.thedirtyyouth.co.uk 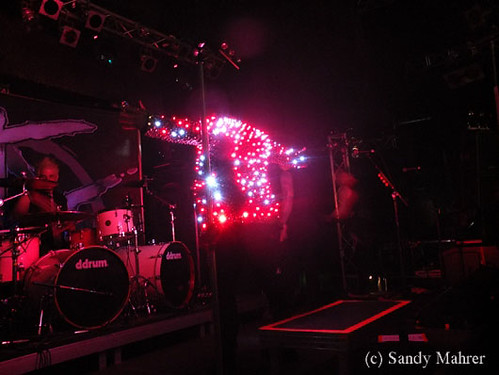 Fozzy
After a break that seems to last forever, the lights dim, the band gets ready, plays the first notes, and then he appears in Glam Rock manner, like a bright shooting star in his well known LED-Glitter jacket – Chris Jericho. As soon as he appears on stage, the entire audience gathers right in front of it. Despite the small crowd, the band gives 110 %. Every of those 5 musicians pulls of his own show, and still they are a tight unit – something you rarely experience with a US band. Drummer Frank Fontsere shows us his Drumstick tricks, Guitarrist Billy Grey jumps around, just like the bass player (obviously not Jeff Rouse, his name is not mentioned anywhere). Rich Ward´s level of energy makes my jaw drop, he jumps, laughs, pogo dances amidst the fans – wow, he definitely did a whole week´s work out in one evening. Chris Jericho does his share of dancing as well, when he is not busy singing. He clearly is not quite the best singer, but his charisma and showmanship makes up for that. I have hardly ever seen a band doing such a crazy show and still keeps the harmony and NEVER misses a beat. Simply fantastic. The fans feel it too, those 60 people make noise for 400 and they go along with anything, be it singing along or kneeling down. And it seems the band is quite surprised about this enthusiastic reception, even for the ABBA Cover „S.O.S“. What can I say, one of the best shows I have seen, ever. Simply great! Fozzy Rocks!
www.fozzyrock.com