In Extremo, Corvus Corax and Tanzwut are among the gods of the medieval Rock arena, Tanzwut being simultaneously also funny and weird. Those «Crazy Germans» gave once again a fierce dance lesson in St. Petersburg! Shortly before this show, we could ask Teufel and Stefan a few questions.

Once again you´re starting your European tour here in Russia and it is not the first time. (Tour dates here : https://www.youtube.com/watch?v=s5ji6GX0ZOw). Why is it so? Probably you have some special reasons?
Teufel: It is already a tradition, because we did it several times already. We also have some traditions especially for Russia that we will show on stage.
Stefan: We are playing in Russia since 15 years and it just happened then. I don´t know why.

What are the ingredients of a nice tour for you – the rider (= the list what a band needs on and off stage, the ed.), or the atmosphere, anything?
Stefan: We like your questions. No one has asked us about that before.
Teufel: Good ingredients are the good mood, really good mood with your friends and the good show and good songs are the most important things. And a little bit vodka, when in Russia. 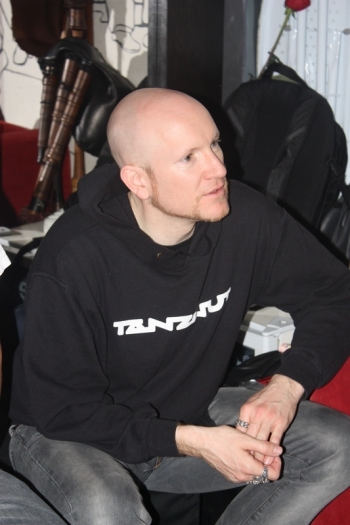 You have announced that you are releasing a single, and then a new album will follow (Freitag der 13. which is on the market now, the ed.), what should we expect from it?
Teufel: Tonight we play 7 new songs from this album.
Stefan: For us the new album is about not getting boring. One song is not like the other, so you can wait for that.

So for the last time you´re making a new album each year, is it hard for you to write so many different songs so often?
Teufel: The older we get, the more difficult it is.
Stefan: …and to remember the songs while we play. Teufel has the large book of his lyrics.

Also you have announced the band Stoneman to support you on tour. How did you choose them?
Teufel: We met them somewhere in the street and they looked really cool, pleasant guys and we got on well. Don´t remember the city, but it was somewhere.
Stefan: They were nice and so it happened.

Do you have any special ritual before going to stage?
Stefan: You know our album is called Friday the 13th, the special day, and against bad luck it helps when you wear your underwear on the left side.
Teufel: So we do it on the stage. To prepared against the bad luck. And we usually look for the black cats.

Any comments on the fact that this year we have two Friday the 13th in a row?
Teufel: It is because we release the album!
Stefan: So there are 2 release dates. We will release again next month.
Teufel: We will have a release party next month also. 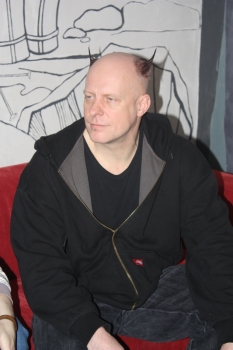 So you are so much inspired by the Middle Ages. What is the most important things that happened to people then?
Teufel: We show the tradition of travelling musicians. We try to live this way and our philosophy is like this.
Stefan: And we have party and good mood.

So what are you doing in real life that is connected to this medieval-philosophy?
Teufel: Cooking – baking – also we drink mead. Everything!

What are your top 5 albums?
Teufel: That´s hard. Something of Nirvana, Metallica…
Stefan: I don´t know because it depends on my mood. Sometimes I love to listen to Johnny Cash or Metallica and then to biopsychose. We listen so many different music. 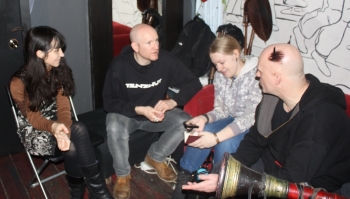 And maybe at least something that impressed you of the releases of the last year?
Teufel: TANZWUT.
Stefan: We put more energy in our own music than in what´s happening around.

Your music is so happy and about dancing and good mood. Is there anything that really scares you in real life?

Teufel: If I look in the mirror in the morning.

Stefan: Actually I can believe that.

Can´t be that bad!
Something you want to say and we forgot to ask you?

Stefan: We are glad to play in Russia again because for us it is always really special. And we are looking forward to the beautiful concert tonight.

Thank you for the interview!