A Thursday, one of the rare spring-like days here in Hamburg – the waiting outside of the venue therefore was quite pleasant for the few fans who had found their way to there early on this day.

Whilst Halestorm had the Steel Panther singer stopping by as his band played the same night but a few metres away in another club, also the waiting fans had their share of joy as Michael Starr took his time to make fans happy with photos and signatures.

Entry, that shortly followed afterwards, was all relaxed and the security was rather nice – but the fans were pretty surprised about the statement, that all kinds of filming for the private with their cameras and mobile phones was not allowed – something like this is new to Halestorm concerts as the rules before had been all easy going and laid back, so that this led to fans shaking their heads. 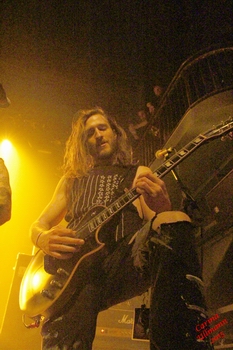 The concert was opened by WILSON , who had the bad luck of a sparsely filled venue as fans had obviously decided to come by a bit later – which led to the fact that the band could simply not manage to inspire a good mood. The Hamburg audience seemed to need some time to wake up and loosen up, since the audience seemed to rock along just the last few songs that the band presented on their diverse and fully rocking setlist.

The venue filled up more and more, but you were still able to stand there and breathe properly, which was surprising – the last time, that Halestorm had played here in Hamburg, they had immediately filled up the Logo whilst here in the Grünspan there were far less people at the very same time of the day. 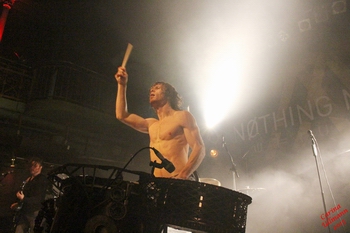 It continued with the American band NOTHING MORE, who might not be really known even though they´ve already had the pleasure to be play a few bigger festivals here – but still, they are an empty white sheet for most of them, and this was also the case here in Hamburg. Most people in the venue were eagerly interested in seeing the band, and what they then saw, they seemingly liked.

NOTHING MORE presented a great setlist, and combined withso much fun, obviously, and energy that the audience at least got off a bit more than before, though it required some time. Nevertheless, the interaction between band and audience was not the best, but the music made up for it – especially the stunning bass solo, where they put the bass on a hand-crafted bass-stand; people´s faces showed their fascination. 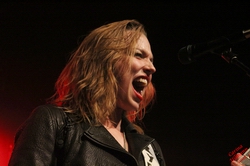 Time was ticking, and the first rows moved closer together every minute before HALESTORM entered the stage – in case someone did not feel like group hugging, he or she at least still had the chance to flee, but no one wanted to give up the good spot gained through waiting for so long. When the band had entered the stage, the audience was with them from the very first seconds on and all enthusiasm was obvious as they were clapping and singing along, combined with intensive headbanging. No matter where you looked, you saw flying hair or horns in the air, which was fuelled by a very heavy and rocking setlist consisting of power-songs such as the concert opener “Mz. Hyde”, “It´s not you” or “I get off” – and of course also other songs of these albums had their spot in the setlist. 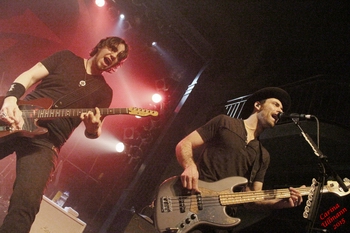 What would Halestorm be without a special drum solo? The crowd, no matter how old, was speechless and you were seeing big eyes and opened mouths latest when drummer Arejay unpacked his supersized drumsticks. At that point, all criticism must have been blown away, and the drum solo was honored by a lot of applauding and whistling from the audience.

But there also have been quiet moments, just like when Lzzy Hale was standing on stage with just her guitar, and presented the crowd a very pure and touching version of “Hate it when you see me cry”. If anyone had no goosebumps, the person either is lacking emotions or has nerves of steels.

Besides this mentioned quiet moment, the time was spent with rocking out – also rocking out to new tunes from the coming album to be released next month -“Amen”, “Apocalyptic” and “Mayhem” were perceived well by the crowd, and it was surprising how well everyone was singing along the lyrics already now. 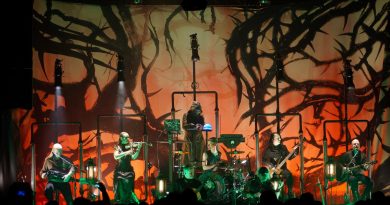