Another wave of cancellations and postponements hit Finland this year as well, with just a handful of major summer festivals making it across the finish line. And mainly because the line-up focused on the local band pool or acts from the neighboring country. For all those supposed to arrive from further ashore, it remained a nail-biter until hours before the gig (see Dark River Festival 2021)… It was clear, however, that the audience was longing for live action and all festivals were  – partly due to certain restrictions as well, though -almost or completely sold out.

Taking place the weekend parallel to Saarihelvetti in Tampere, Smugglerrok is something like the successor to the legendary Hammer Open Air, but with a location right in the center of Lieto. This means that it can be easily reached by a regular bus within a quarter of an hour from Turku, shops and restaurants reachable within a 5-minute walk. The only thing that, in my opinion, could be improved at this well-organized festival – for those “outsiders”, please describe in more detail at which of the many bus stops around Turku’s Puutori you should look out for the festival shuttle …

A big plus was the clearly laid out area, offering a good view of the main stage from pretty much everywhere. The small side stage was exclusively dedicated to local talent, covering genres from world music/classic rock and psychedelic to alternative pop, punk, thrash metal and metalcore, identifiable from band names and photos: Atomic Annie, Awake Again, Underclass, Sally Pilgrim, Stoned Statues, Avacia, Mark Bertenyi Band. There was a wide spectrum of presentation – some played their first festival gig ever, obviously nervous and still a bit static, others pulled off an experienced show, communicating with the audience. However, all great and huge potential to be on the big stage next time.

Here to the GALLERIES from DAY 1 and DAY 2

I probably don’t need to say much about the many legendary acts on the main stage – their quality was well known even before Corona, every single band was visibly happy to be back on a stage, offering a best-of program, every band thanked the fans for their support. And every single band, even those on the small stage, faced an enthusiastic crowd – the trip was absolutely worth it.

Day 1 granted us a perfect weather situation, having crowds of fans streaming in as soon as the grounds opened. Many immediately secured their place at the front row, because Blind Channel – a recent Finnish Eurovision success – opened the festival with their melo-metalcore. An energetic show indeed! I still don’t understand why the middle finger became a band symbol – because this gesture from the enthusiastic fans to the band can be totally misunderstood 🙂  After those up-and-coming youngsters, the oldtimers Timo Rautiainen ja Trio Niskalaukaus set out to prove that they haven’t forgotten anything in the forced time-out and still deliver mega-heavy new and hits – thankfully including “Nyt on mies”. Equally legendary and proving age is just a number: Melrose with their rock’n’roll-rockabilly-punk mixture. In terms of energy and action on stage, they almost competed with Blind Channel… (see “caught in the air” photo below) 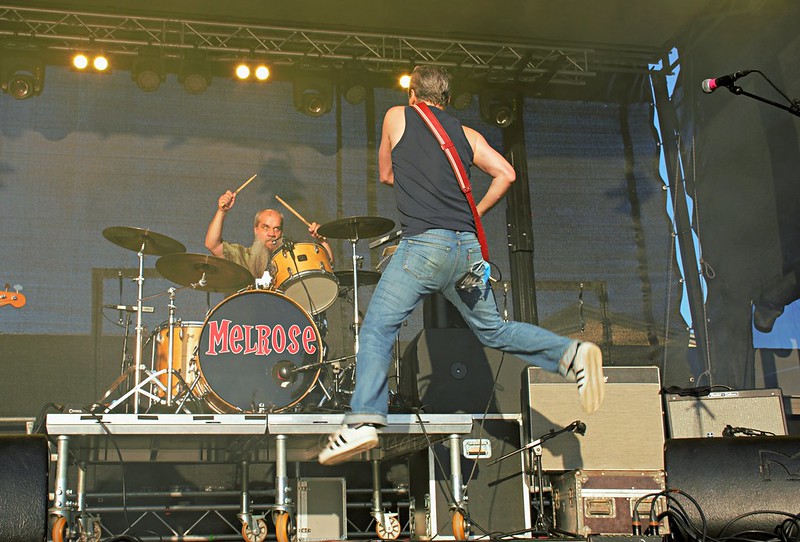 Beast in Black had apparently stashed away so many pyrotechnics during the forced break that a whole arsenal was fired off for almost the entire gig – a truly massive show, followed by loud demands for an encore as the logical consequence – unfortunately not possible with a strict festival schedule. And after all, there was this Finnish hit factory Amorphis following as headliner, who basically in a way delivered the live picture to their new live album to the fans in Turku – as always a fantastic gig and you could see every single band member (some only briefly) grinning blissfully from ear to ear… almost as blissfully as the people in the audience….

The VIP ticket paid off in full on day 2, as only those in this restricted area were fully protected from the persistent drizzle which lasted almost the entire day. Probably that was the reason for a smaller crowd in the beginning, it became really crowded only halfway through the program. However, the increased humidity did not affect the cheerful atmosphere at all. Kotiteollisuus once again combined metal with stand-up comedy: Question to the audience, why smugglerrok, what was smuggled – answer: booze!!! – Oh yes, of course, what else – I bet u smuggled it in today too! Colourful glam rock party feeling came up with Andy McCoy and his Rock classics program – besides his wonderfully weird Stadi-Slangi, he also literally brought a bit of sunshine from Helsinki. Kilpi delivered a heavy/power metal show indeed, ear candy followed by more ear candy – wow, what a great singer! And the fact that Stam1na had a massive mosh pit going probably doesn’t need to be mentioned… During Apocalyptica, joined by singer Tipe Johnson for some songs, the drizzle added to the magical atmosphere. Personally (as with Amorphis the day before), I only missed some of my faves in the tight festival program, e.g. “Bittersweet”. And the headliner Europe – well, even snow and hail couldn’t have spoiled this gig. Not only the string of hits, but also the cheerful mood  and the professional show of those “age is just a number” gentlemen kept me – despite being soaked and freezing – spellbound until the end.

Finally, thanks to the organizers who didn’t throw in the towel despite all the difficulties, thanks to all the volunteers whose tireless commitment, humor and enthusiasm (e.g. the bar staff, even late at night) make such festivals possible at all. And I also have to thank the disciplined audience, who kept to the rules regarding distance, masks etc. Conclusion: Great festival, and like another famous Austrian put it: I’ll be back!