It was the event of the year 2017 in the Batschkapp in Frankfurt on 29th December 2017.
The location was almost sold out and TANKARD surely expected to welcome many fans at their hometown show. Some awesome bands played as support: Perzonal War, Pie Ratz, Scornage, Sapiency and special guest Holy Moses rendered a special touch to this particular occasion.

The Batschkapp opened its doors already at 16:30 and PIE RATZ entered the stage at 17:00.
However, at this time there wasn’t yet audience in large numbers. PIE RATZ, who partly define themselves as a band with only one serious song in their set, gave hell to the metalheads with a tight and powerful performance. Exactly that was the right foundation for a great evening.

SCORNAGE from Aachen captivated the audience from the first moment. They played powerful, pure Thrash Metal. Unfortunately it was not yet that crowded at this early time, but during their show, SCORNAGE lured more and more people to the front of the stage and satisfied the headbangers fully. SCORNAGE have had their 20th anniversary and you can be excited if they will also reach the 35years someday. 

After a short break PERZONAL WAR came up with their trashy sound and you could recognize from the start that the guys from Troisdorf are influenced by old Metallica. The location was much more filled with people by then and PERZONAL WAR intensified their performance song by song. They showed their status as a big name in German’s Trash Metal scene and impressed with a very good gig!!!!

But it should become much better:

SAPIENCY beat a different drum as the bands before and presented with utmost dedication an extremely tight style of melodic Death Metal. Especially the two shouters Lars and Phil took care of variety and knew perfectly how to pull the audience on their side.
You will hear a lot of SAPIENCY in the near future!
THE surprise of the evening – definitely check them out!!!!

“35 years TANKARD – 36 years HOLY MOSES” Sabrina Classen shouted at the beginning of the gig from an act who could fill the Batschkapp as the only headliner easily!!!!
HOLY MOSES showed up totally motivated to give everything on stage as support of TANKARD. It’s really unbelievable that Sabrina (who keeps to herself being very introverted in the backstage) offered such a great show and has a much deeper and more powerful voice than most of the established male Death Metal shouters. In the first rows there was a massive moshpit until the end of the gig.
A highlight of the set – for sad reasons – was definitely the guest performance of Chris Staubach from Courageous. In memoriam of Nevermore’s Warrel Dane, who died on 13 th of December 2017, they covered their legendary song “Narcosynthesis”. 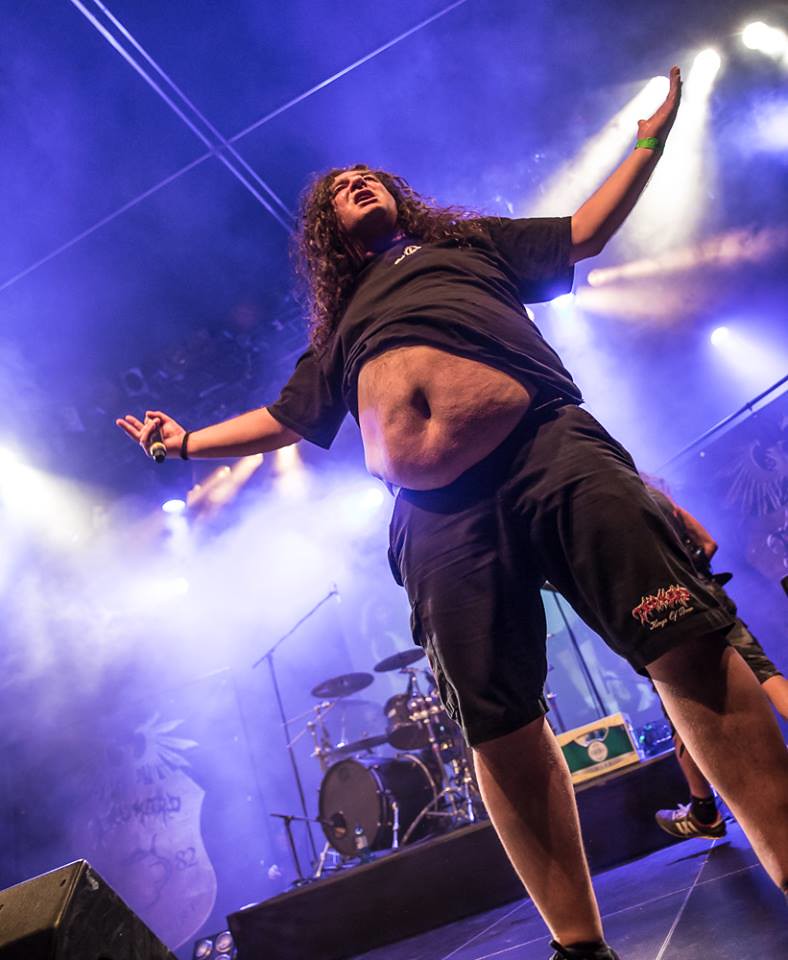 Now it was really time for TANKARD:

Gerre and his guys ensured an awesome and emotional show from the first moment, backed by a video screen which showed a lot of venerable anecdotes of the 35 years history of this band.
With ” One Foot in the Grave ” TANKARD immediately had the fans on their side and there was no holding back anymore in the location.
It was a real birthday party, with everybody celebrating until they dropped, on and in front of the stage. Highlights such as “Die with a beer in your Hand”, ” Zombie Attack”, “Freibier” and “Alien” or ” A girl called Cerveza” rounded up the performance impressively and held the audience on a high energy level.

The Eintracht Frankfurt hymn ‘Schwarz-Weiss wie Schnee”, which will only be performed live again when the SGE playes the DFB cup final or reach in the Euro League, as Gerre told us, was the highlight of the evening. Really everyone had a lot of fun and we all hope that Tankard will continue their impressive career for some more years.
To conclude the evening, Gerre & co. performed “Empty Tankard” and released the fans to their home or to the beer bar!

A totally awesome evening for everyone, ending the year 2017!!!!

Setlist TANKARD:
One Foot in the Grave
Zombie Attack
The Morning After
Not one Day Dead
Rapid Fire
Rules for Fools
Die with a Beer in Your Hand
R.I.B. (Rest in Beer)
Minds on the Moon
Pay to Pray
Metal to Metal
Rectifier
Chemical Invasion
The Beauty and the Beast
Freibier
Alien
A Girl Called Cerveza
Schwarz-Weiß wie Schnee
(Empty) Tankard