Today’s evening offers Scandinavian power with two Finnish bands and a Swedish headliner. And those acts promise a lot of action and screaming from the mainly female front rows.

First on are Shiraz Lane from Finland, a pretty young band that I have seen last year with Brother Firetribe in Zürich. Their playing on stage and the power of the vocals still have room for improvement, but their show is top. Their song material is fun and singer Hannes Kett is a pure show man. He dances around on stage and flirts with the girls in the front row, whereas the other band members seem too shy even to look at them. I would have preferred more of their faster and heavier songs, but the show of those guys is great.

It continues with the next Finnish act One Desire! I have seen singer André Linman back then with Sturm und Drang, the Finnish Hit Band between 2008 – 2010. Back then he was just 16 and too shy to speak on stage at all, or to move more than necessary. Today he still looks nervous and therefore his show seems overdone. Musically One Desire have some very good songs but somehow I cannot really warm up to the band. I cannot say why, and luckily the majority of the fans see it differently and celebrate this act. Towards the end it becomes obvious that many fans have just waited for certain two, three songs in the program that they know.

The next changeover is a bit longer because the stage needs to be empty for a hurricane named H.E.A.T.! They enter the stage with “the heat is on” song intro, and even in the photo pit it’s getting tight with 10 photographers and a singer who cannot stand still for a second. Those who have seen H.E.A.T. live before know what I am talking about – there’s action! Singer  Erik Grönwall dominates the stage that you hardly notice the other musicians. I have no idea where he gets this energy to be running wild (literally) for about 90 minutes straight.

As the first rows are still filled with females, he seeks close contact and even jumps down on to the security fences, then back on stage – which is not that easy, and he does it the whole evening, so many times! And later he even jumps into the audience while singing a song, another time he crowdsurfing while still singing, then runs through the hall and jumps back on stage. What a show! 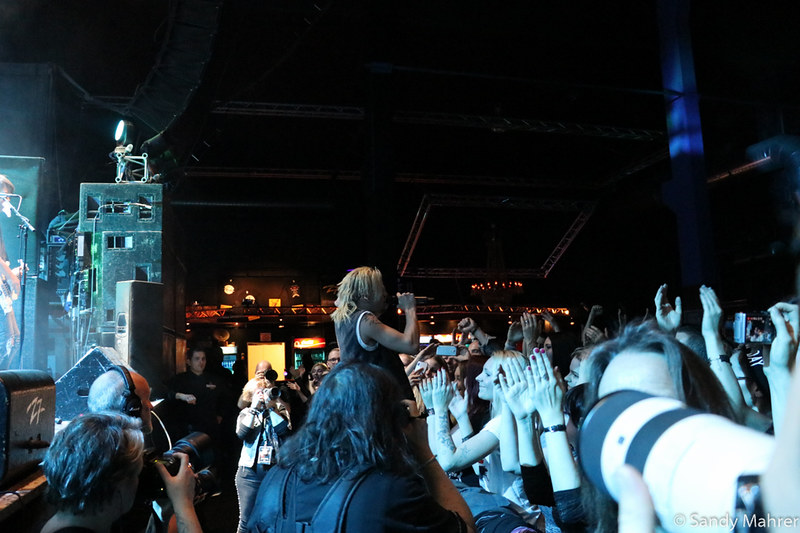 Despite all this action his voice sounds clear and clean, which is especially obvious during the slower songs or those he sings alone on stage, playing acoustic guitar. H.E.A.T, could not have found a better singer. His band colleagues do their best providing a show too, but they hardly have a chance to compete with Erik. But there are so many bands who stand and fall with their front man, and this band truly has had a jackpot with this one. Fantastic, a great band indeed!
More photos HERE – Fotos: Sandy Mahrer