We dragged Tobias “Tobi” Kersting (guitar) and Dirk Mayer-Berhorn (drums) in front of our mic on the occasion of the first concert of Orden Ogan’s first headliner tour. Although they should be strained by the upcoming show, they are totally relaxed and talkative. Interviews are usually not as funny as this one with these 2 guys.

You are about to start your first full-length headliner tour. Was your preparation any different to  your previous support tours?
Tobi: “Yes, definitely. We have a much longer set and our own crew supports us. In order to get everything set up, we made a preproduction. We rented a venue nearby called “Alter Schlachthof” (Old Slaughterhouse) and used it for our rehearsals to train the complete live situation. We used the rehearsals to set the lighting, the effects and stuff like that.”
Dirk: “We rehearsed between pig halfs, haha.”

Gore Metal, I understand…
Dirk: “That’s it, haha! We used to be support act. We always had intense rehearsals, but this time we expanded them.”

Most interestingly, your support act is Viktor Smolski’s new band Almanac. A few years ago, you were support band for the Lingua Mortis Orchestra. Was it therefore an obvious decision to take Almanac on your tour?
Tobi: “There are many reasons why we know and like Viktor since Rage times. Originally, we wanted to take Mystic Prophecy with us, but that did not work for some reasons. Because Seeb (Levermann, vocalist and guitar player of Orden Ogan and also producer – TP) produced the Almanac album, it was logic development of the situation. The album was released today, so everything works nicely.”

You are known for your costumes. Where do you get the inspirations from and who makes them for you?
Dirk: “They are unique and they made especially for us. But we do not change them very often. Right now, we have our second outfit. The first ones were inspired by the album “To the End” and they had therefore an apocalyptic look. Now we use those costumes known from our ‘F.E.V.E.R.’ video clip. They are actually much lighter than the ones before.”

The reason for your tour is the release of “Book of Ogan”. What can we expect from it?
Tobi: “The 2 DVDs and CDs contain the complete history of Orden Ogan. It contains the history itself featuring all former band members and the current ones of course as well. There are also a lot of live shots, festival impressions and stuff like that. In addition it contains the “Testimonium A.D.”, the first ever Orden Ogan demo. We also put a lot of photos into the booklet to make a worthy package.”

And the “Testimonium A.D.” release is no longer available.
Tobi: “That’s right. The first release is completely sold out.”
Dirk: “I do not even have any of them.”
Tobi: “Me too. But now we could play some of the old songs again.”

What I miss on the audio CDs are live recordings. Why did you omit those?
Dirk: “We thought about including a separate live CD. To be quite honest, I don’t remember right now why we didn’t.”
Tobi: “In the past we often released limited editions with bonus live DVDs. Plus we have 2 live shows on the DVDs contained in “Book of Ogan”. We thought that’s enough. I think that there will be a full-length live album in the future. But we don’t have concrete plans yet. I think that it needs the right occasion to record a live album. When it comes one day, we will record and release a live album.” 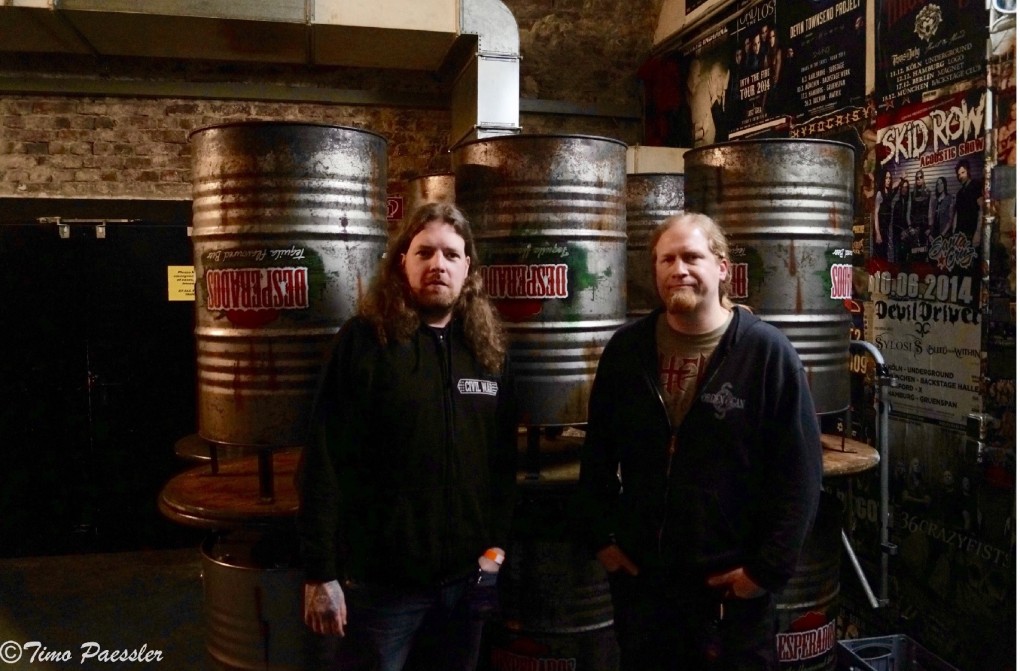 “Book of Ogan” looks like a retrospective to me. Isn’t that a bit too early for you? You are not that old yet.
Tobi: “But we definitely feel very old.”
Dirk: “Absolutely!”
Tobi: “It was the right time. We had very busy years with great tours with Hammerfall and Powerwolf and a lot of other events. We had the idea for a while to create a summary of this time. Now the time was right to make an overview over our past.”

You recorded a lot of professional video clips in the past. What do you expect of them?
Dirk: “There is no Heavy Metal TV show today. But YouTube is a very great channel for such video clips and I think it works. I appreciate video clips very much because they offer something visual in addition to the music. Just because there is no more Heavy Metal into TV, it is no reason for me not to produce nice video clips any longer.”

But the production costs a lot of money. Even many successful bands resign to make videos because it does not pay.
Dirk: “It is not everything about money. It is also about fun…”
Tobi: “But standing two hours in the bog is not funny, haha. At least you could sit…”
Dirk: “Yes, I could sit, that’s right. But the result is nice and I like to watch it. And I appreciate YouTube as a channel very much. If you take a closer look to the click counts, you could see how many people can be reached this way. I think that pays off.”
Tobi: ”Do not underestimate a nice, well-done video clip. It would of course be easier to record an album, release it and stay at home afterwards. But if you want to develop your band, it helps a lot. The clicks, as Dirk said, do say enough! The presence and the links to Facebook are being shared. It is much more appealing than posting an audio track only. If you see the human being in the bog, he is much more sympathetic to you.”

What do you think as a musician about the ongoing digitalization in the music business? I am talking about iTunes, Spotify and stuff like that.
Tobi: “Well, YouTube helped us a lot.”
Dirk: “Are you talking about buying music digitally?”

Exactly. Does it make sense for you as artists to present your songs on platforms like Spotify? A lot of artists stated that there is no money to make.
Dirk: “It makes sense for us. It is the spirit of the time and you have to be present there. But I think that especially many Metal fans buy also the album after checking it on Spotify. At least, it is what I do: I listen to new stuff in the internet and I buy it when I like it. I need the feeling to have an hardware product in my hands and I think that many Metal fans feel like I do. Luckily!”
Tobi: “We as a band put our focus on a nice product. We like limited editions with a nice Marshall cover. We do not do that because we think: “Could some draw a cover for us.” We think that it belongs to an album. We did it already for ‘Vale’ and we still do it. If the overall product is beautiful, it will be accepted by the fans.”

Finally, I would like to know if you can live from the band?
Dirk: “We could if we were constantly on tour. Then it would be possible, but it isn’t like we do it. We all have regular jobs. Tobi, Niels and me, we work as instrument teachers in a music school. Seeb has his studio where he works constantly.”

But you do not have any problems yet to combine your jobs with the music?
Tobi: “They don’t know that I am here, haha!”
Dirk: “Haha! Yes, that works. It would be difficult, if I had a ‘normal’ job with normal holidays. Luckily the music school is closed during school holidays, so we can use that time for touring.”
Tobi: “Luckily, we are able to combine both things. Right now there are again school holidays, so we can do this tour. Everything else would be difficult to finance…”
Dirk: “Only if you were constantly on tour…”
Tobi: “Or you only eat bananas.”

That would be a restricted diet, but you could actually survive a long time like that.
Tobi: “I knew it was a good decision to buy a bag of bananas today, haha!” 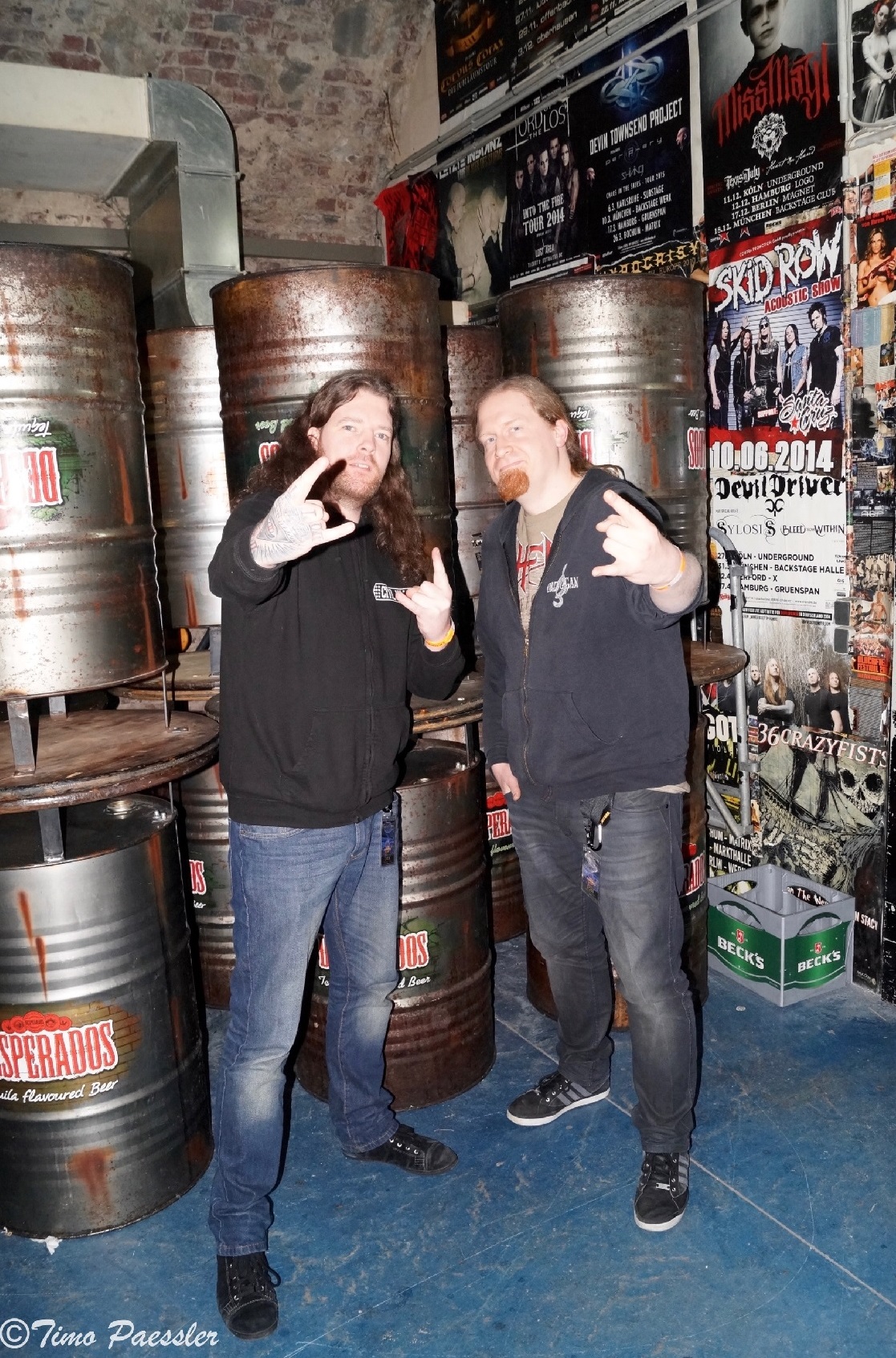 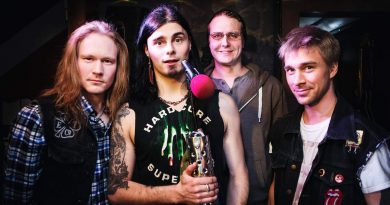