The goth-wiccan-rock legends, British Inkubus Sukkubus, are like a whole unique (and very pleasurable) sin of its own, given that this band are active practising Wiccans. Thus no wonder when introduced to Stalker´s concept of the Seven Deadly Sins, Candia´s response, with a twinkle in her eyes and unhidden enthusiasm was “Interesting!”

Envy
(all laugh)
Adam: it´s going to be published, is it? What would you say? Hey, you go first, I just look for my lighter… Is it if we´ve experienced envy?
Candia: envious of… hm… (takes a pause) There´s envy on a very deep level, there´s envy if somebody´s got nicer hair than you! And there´s deeper envy when someone seems more content, or happier… So yeah, we´ve definitely experienced it. When I´m having a crappy day and you see someone very happy.
Tony: I don´t try to envy other people, it´s obviously not very healthy. But of course you do envy, especially when you see people have things when they don´t deserve them, but still, it´s something you should not do. Everyone will always have something more and better than you, there´s always gonna be somebody, isn´t there? I think as long as you can believe that you can have what they´ve got that you want, that can be even seen as a positive thing, but you think “I can´t…” that´s not good at all, then you´ll just feel about yourself and never get anywhere anyway.
Candia: right! We create our own fortune. So when I catch myself feeling envious of whatever the people have done with their lives or their happiness or whatever, then I can think it´s my fault and I can do something about it, so don´t just leave it in the lap of the Gods and make your own changes.

Sloth
Candia: oh, guilty-guilty-guilty!
(all laugh)
Tony: sloth… I think you can always do more with your life, but it´s easier just sit all the time and think about things, instead of going ahead to actually do them. I could´ve probably learnt six languages by now, if I put my mind to it, ´cos my parents are linguists, well my dad is, so yes, I´m guilty of that I would say.
Candia: sloth perpetuates more sloth, it becomes like a downward spiral I think. So we´re all guilty of that at certain times, and you have to recognise you are and try to find energy to pull yourself out again. It´s very easy just to let yourself slip into it.
Adam: there´re different types of sloth, isn´t there? It´s not just sitting around and not doing nothing, it´s perpetuating in the same loop and you may be doing something quite active, but it´s not going anywhere, and you know it is but you just keep doing it, in the same loop over and over again.
Tony: there´s also intellectual sloth, which leads directly to ignorance, not thinking and understanding things properly.

Vanity
Candia: (thoughtfully) yeah…
Tony: I actually think it´s actually good for people to be a little bit vain. You have to be careful not to become obsessively vain, but a little bit of vanity is very good for people, for your self-esteem. Often if you´re feeling good about yourself, someone may accuse you of being vain, but that´s just them being jealous of you. It also affects how you act with other people, it stops them from being depressive and self-centred. I mean if people are a little bit vain, they are happier and therefore a better company.
Candia: there´s the case of having to love yourself before you can love others, and then others can love you. But the trick is keeping it in check and not to become too absorbed. I think to a certain extent we are all vain…
Adam: I think we are quite vain people, to a limit of course. Not as vain as some people in our business I suppose.

Greed
Candia: greeeeeeeeed… That can be linked with envy, I think. It´s wanting more than you can have, which can be a very destructive thing. Essentially it´s wanting more than you actually need, which is probably the most damaging of the whole seven deadly sins, I would say.
Adam: yeah! There´s nothing wrong with actually wanting stuff, but it´s when you don´t really need it, then it becomes dangerous. I´m greedy for pleasure all the time, also when I was younger, which leads to problems, drugs, drinking and all that, when you´re in the rock´n´roll.

Lust
Tony: lust is a natural thing, because without lust, and especially sexual lust, people wouldn´t procreate. You have to have that lust in you.
Adam: I think the most problems people have are with people who are too lustful, and that´s that envy again. I suppose if there was no lust, there won´t be any people here.
Candia: no? I think this is one of the most positive sins…
Adam: I think a lot of people feel quite unhappy and generally a lot more guilty about being lustful that anything else. More people feel more guilty about that than say, about being greedy or slothful.
Candia: I think of it in Iggy Pop sort of way, that lust for life is a form of life energy, having passion and energy, which is quite the opposite of sloth. Lust is showing you that spark of energy and you´re wanting to do something, live life to the full, so yes… Obviously there can be downsides too, but on the whole, I think it´s the best one of them all.
Adam: I think from all the seven deadly sins, lust is probably the one being pushed the most by the religion to be the sin, whereas in fact it´s the only one in fact about being a human. So as opposed to the philosophical trait, it´s more the religious trait, so it´s difficult to put your head around lust as a sin really.
Tony: it also depends on what the lust is directed towards, what the object of lust is… For instance if it´s sheep or something, it becomes a problem…
Candia: what?!?! Sheep?!!? Where did that come from?!
Tony: it´s true! Some people have lusts which are very unconventional and it causes them a lot of trouble and that´s dangerous…
Candia: let´s talk about the sheep later, shall we?
Tony: About sheep, I wasn´t talking about me. It´s just some people have lusts which are completely unacceptable and so you can´t just say that lust is the most positive thing always, because for many people it causes a lot of trouble…
Candia: unless the sheep loves you back equally, it´s ok then.

Gluttony
Adam: it´s difficult to get your head around gluttony, cos it´s tied in with greed. I can´t say that I´ve really experienced gluttony…
Candia: oh, I have!
Adam: …except for getting completely pissed.
Candia: yeah!
Adam: because getting stupid drunk is pure gluttony, isn´t?
Candia: for me gluttony is when I really know I don´t need more, but there´s a table full of alcohol and you just can´t stop. Your body is saying ´no´, but… So that´s a form of gluttony I think. It´s just you see it there and it just says ´drink me, drink me´…
Tony: it´s because you´re brought up not to waste food…
Candia: …not to waste Jägermeister…
Tony: …and your parents tell you ´you better eat that up, there are children in the 3rd world…´
Candia: …children in the 3rd world who´ve never tasted Jägermeister and you´ve a full bottle of it…
Tony: so you grow up, conditioned to eat all that you get, because you are brought up that way. And the same with drinking, I suppose. Let´s say you´ve a pint of beer and there´s a bit left at the bottom and you´re about to go home, but then you end up sort of drink it anyway, you don´t want to waste it.
Candia: when we drink, we first talk a lot, then we argue, and then wanting to explore places! It´s this kind of urban exploration, go out when the sun´s almost up and go check out the surroundings…
Tony: I´ve fallen out of a hotel window, two floors up, walking on a rain pipe actually, so yeas alcohol can lead to death, I suppose…
Candia: none of us are nasty drunks though, no.

Wrath
Adam: I´ve never really experienced strong anger, except for people who stick to rules and never see common sense. You know what I mean when I say traffic warrants and things like that? They give you a ticket for no reason and stuff like that, The only time I´ve really ever lost my temper was at a time like that.
Candia: anger – yes, once a month I experience that! Ladies´ week.
(all laugh)
Tony: I try just not to flare up, which sometimes I suppose I should.
Candia: once every five years you do.
Tony: yes, once every five years and when I´ve had enough, it comes out. Maybe if I lost my temper more often, it won´t be so bad when I do. 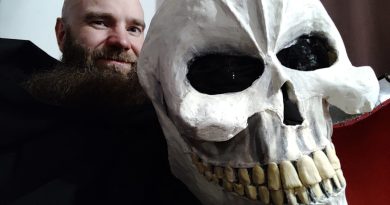 The adorable villains of Tomi Andersson

Serenity / Beyond The Bridge / Midriff 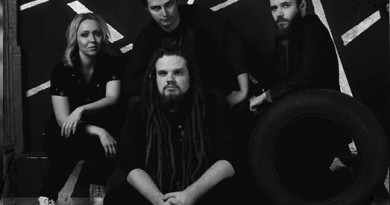