Mysterious, dark and a unique attitude – Six Inch is another act from Finland providing good music since 2010, and surely those guys and the lady on the violin draw attention just with their looks. Talented and very professional, they prove to be on the quick rise with their videos and their music. How such an act can become so professional within only 3 years, and more about the characters in the band is revealed by singer Andy Moisio here in our E-Mail interview.

Hello Andy, first of all thanks a lot for your time to do this interview. Could you first of all introduce the band and its members for the ones who don’t know you yet?
We are a dark rock band – Six Inch formed in Helsinki, Finland, in the grey autumn of 2010. After few changes in the crew Andy Moisio, a singer with strong and really personal voice took place as the band`s vocalist from the next spring in 2011. Then Six Inch released its first two song demo in the summer and later in the same year an EP, containing five more rockin’ and more heavy, soulful songs. During the winter months in 2012 violinist Pinja and keyboardist Nestori joined the band so the sound became more dark, mysterious, and passionate. That’s how Six Inch finally got its own totally foggy, romantic and misty feeling on the way to release their debut album and Six Inch signed a contract with Italian Da-records s.n.c. in early 2013 … Six Inch “Melancholic Whisper Of Life” album is out now..
Six Inch are: Dey: Rythm Guitar Kalle: Lead Guitar Migi: Drums Risto: Bass Pinja: Violin Nestori: Synths Andy: Vocals

When did the idea come up to form Six Inch? And how did the members come into the band?
Migi and former members formed a band and a lot has happened since then… I do not look back at those times,;) because now we found the right Six Inch members somewhere from the internet.. New Bass player Risto was my old friend. 🙂 Now we have the right sound..

You are still a quite new band, founded in 2010; since 2011 the band has played lots of shows and you released your debut record earlier this year. So you developed pretty fast compared to other bands, what is your formula to success?
It’s easy.:) Skilled and well-motivated players and a lot of ideas. I am a glutton for work and it causes a heart attack to me,:) but there is room for improvement and the road is never-ending. Formula is that you have to compose continuously something, in most cases it is shit, but sometimes you´ll succeed, 🙂 hah

Finland has a huge amount of new bands that come up every day, so that it is hard to keep an overview. What do you think distinguishes you guys from other bands in Finland?
I think that my horrible voice and personal vocal melodies set us apart from other bands.;) And of course sound of the violin, a large number of musicians is also different, so our live sound is big. Handsome synth player is also a plus… hah

To me it seems that each member is inspired by totally different styles of music. Can you tell us a bit more about the members, what they have been doing before they became part of Six Inch or other projects they are involved in nowadays?
Yeah, that is true, personally I do not like when everything is made in the same mold. The different styles can also be seen in our new music, next year you will hear it. 🙂 Or at our gigs.. I do not know much about their projects.. I only know that Risto have that GINA.. Kalle and Dey are doing something … more than just masturbate. 🙂 I`m so bad at this I don`t even know where I am… where am I?

What bands inspired you to make that kind of music?
Korn, Marilyn Manson, Nightwish, Danny Elfman and arrrrr pirate music 🙂

Why did you choose the name Six Inch?
It is short “with every single way” and sounds cool into my ear.. And it is a sad Finnish average male penis length, because there must be something sad fun in the name, such as the death of a clown

All your promo pictures are done by your Keyboarder Nestori, he is a great photographer and Photoshop-Artist! What other talents next to music do you other members have?
Not all of them… New pictures are the handiwork of Nestori and he is a multi-talent.. Now I need to know the band members?.. damn 🙂 haha.. I am a former hairdresser and Migi is able to build houses or sharing orders with that White Helmet.;) Kalle is able to collect the goods, Dey knows how to satisfy a woman… Pinja is a woman, so she knows all the answers. 🙂 Risto is a business man and a master of boating …

Your videos always look awesome. Who delivers the ideas for them? I saw a couple of your video clips on www.youtube.com/SixInchBand , they look really professional! Do you have a friend who is doing these videos, or how is such a fresh band able to afford such professional looking videos?
Thanks! Me and the director are behind the ideas… Music videos have been made by our friend, our professional friend… I know some people who know some people who rob some people, 🙂 check out the Atiimi https://www.facebook.com/AaTiimi

The cover art of the record reminds me a bit of Siouxsie Sioux, just coincidence or did you want to look like it? Who did that drawing?
It is coincidence `cos the idea comes from console game called Alice madness return.. Nice game by the way, not better than Castlevania but still.. what you asked? 🙂 My brother´s girlfriend painted the album cover and she is also actor in “wound torn bride music” video.. Gotta love my family..

The members of Six Inch are all very characteristic personalities when it comes to looks and attitude, how important is the image for a band nowadays? How is it, are you everyday styled like this or is it more like a stage outfit for you?
It`s dependent on the music style I think… And of course spectacular style looks good at the stage and pics… Our music sounds kind of big so then image is important.. But different personalities is a good to be present.. Not in the same mold as I said earlier.. So be yourself it`s goooood.. Yes this is my everyday style and always has been I live in a fantasy world.. I hide my ugliness under fine clothing 🙂

You got a contract with an Italian Label, how come?
They were interested enough 🙂 And ideally we´ll start our journey from independent record label

What do you guys wanna reach with your music?
Profession of course and I want to achieve myself through our music and to become a better human being. I hope that the listener will find the red thread which is in our music that could be awesome… a little art of seed..

The year soon comes to it’s end, what are your New Year’s resolutions?
I will quit smoking 🙂

So then last but not least: What question would you like to be asked in an interview you have never been asked before?
What happens to you after death? Is there some kind of afterlife?

And the answer?
In my luck, I get stuck in limbo, but fix it and continue my journey over purgatory…in the place which I call my home

Thanks a lot to Andy Moisio for his time & Nestori Lönngrén for the photos and of course Six Inch for the Music! 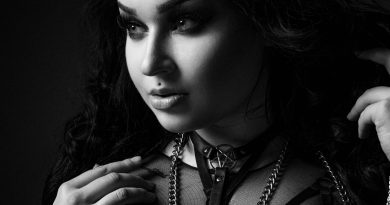 Miss Sassy Fierce: Be nice to yourself

The Sorrow: Core and Chaos!