At the end of the world, at the Arctic circle, the Simerock Open Air took place for the third time, three days and four stages presenting big and small stars from Finland. Those three Open Air stages met the Rockers´ desires whereas Lapin Kulta Club Tent offered mainly Techno, House or Hip Hop.

The weather did not quite work out this time, about 9 degrees and constant rain accompanied Callisto´s opening of the festival on Friday. Without us as we were still looking for the right entrance and somebody who speaks English. Not easy, and something seemed to be wrong with the organisation, so we had to wait about two hours to get our press passes and to get to Simerock Kaarilava. For this you had to pass a security check, walk across a camping area, then again another way-too-small check point, and then after passing food and shopping stands you finally reached the stage.

Finally we arrived for Deathchain but they were almost finished, therefore we only got a little taste of good old Death Thrash. What a pity that this band played that early, but one good thing about the festival: Every band has a full hour playtime. (SM)

Klamydia
and their classic Punk attracted many people to their stage, despite the pouring rain. Their naughty songs in Finnish language, and especially the singer´s speeches spiced with curse words provoked loud cheers from the audience. (SK)

Tik Tak
When those six Tik Tak girls entered stage, the average age in the audience had dropped dramatically, compared with the previous band. Their Finnish Pop songs with some Rock attitude appealed a lot to the young fans. (SK)

As the rain did not stop and it became really chilly, we decided to go back to town and eat at Lordi Rocktaurant, a reindeer meat dish called “Rudolf´s last journey”. (SM)

Dressed up like it was winter the following day, we travelled back to Arctic circle which is quite near Rovaniemi.

Bloodpit
Already at 12 h the Bloodpit guys entered stage. With their new album “Off the Hook” that just came out, they rocked the cold souls of Napapiiri, good old Rock´n´Roll is always nice. (SM)

Swallow the Sun
Their show appeared to be ill-fated from the very beginning, it was raining and a strong gust almost blew the band off the stage. But despite the great odds the band played an excellent set that included only songs from the first and the recent album, with the exception of “Descending Winters” which fit quite nicely to the weather. (SK)

Profane Omen
Those poor guys, they started off nicely – and then a technical problem, nothing worked, no sound. Well, what does the entertainer do if he cannot use any instruments… he jumped up and down and sang Finnish drinking songs where the audience could join in. The band had to wait about 15 min until the instruments worked again. The remaining 30 min of their show were excellent, though. (SM)

PMMP
The girls of PMMP are a must for Finnish Festivals, who does not know their songs „Oo siellä jossain mun“ und „Päät soittaa“. Finns at least love this band, and no other had more audience singing along. (SM)

Brother Firetribe
play this summer at almost every festival. In the meantime everyone knows all their songs by heart, but still they are not boring. Their single “I am Rock” is a huge hit in Finland, real ear candy that stays with you for weeks. Usually only Emppu is Mr. Charming, but also the rest of the guys have learned their lesson of attracting girls in the meantime. The young ladies at the festival enjoyed it and melted away when singer Pekka gave them a magic smile. (SM)

Uniklubi
Female screeches disturbed the peace of Lappish forests when Uniklubi entered stage. The five guys did not only play the new “Vnus” but also classics like “Näiden tähtien alla“ and “Rakkautta ja piikkilankaa“ which was especially appreciated. (SK)

Poisonblack
Love Infernal was yesterday, today it´s Endless Rush. Indeed the band writes great music, but unfortunately disappoints sometimes live. Sometimes the voice of Ville Laihiala leaves a lot to be desired. Still it is quite nice to listen to his super sexy moaning at Love Infernal. (SM)

Almost frozen to death we returned to the hotel after that to check out the big bands the following day.

Sunday the weather was even worse than before, and so we decided to watch just the festival headliners and visit Rovaniemi´s attractions before that. It is definitely worth seeing the Arcticum and Santa Claus.

Negative
Mr. Jonne Aaron and his crew were welcomed with a lot of screaming and screeching. Songs like Hey Hey / My My and The Moment of our Love were sung by the fans alone, Mr. Supersweet did not have to invite them to. Unfortunately also Negative had technical problems, until the third song Christus´ guitar did not seem to work at all. (SM)

Tarot
Impossible not to love them, those Tarot heroes with brothers Hietala and vocal wonder Tommi Salmela. This seemed to be one of their worse days, still the gig was a full success with almost all their well-known songs. (SM)

Sunrise Avenue
You could have thought that the noise level during Uniklubi was the highest possible, but you were wrong. We are not talking about the band and their clean Pop songs, but their female audience. Many songs of the recent album, e. g. the “Fairytale Gone Bad”, were on the set list and were sung along by a well-studied audience. (SK)

Hanoi Rocks
entered stage as the last band of the festival, and it was amazing how they managed to motivate the huge audience, despite the late hour and the freezing temperatures. Who had been patiently waiting was honoured with great 80s Glam Rock. Michael Monroe topped the energetic stage acting with a stunt, he climbed high up on the stage construction. (SK)

Unfortunately the organisation, sound and location planning was not well considered. Just getting from one stage to the other took 5 to 15 minutes, hence it was impossible for us to check Tivoli Stage with bands like Dead by Gun, I walk the Line etc. Every time you had to return to another stage, you had to wait for 20 min at a security check and missed the next act. And I have never seen so many problems with technical equipment and sound. Still the hosts, e g Tapio Wilska (Ex-Finntroll) and his colleagues managed to raise the spirits and made you feel comfortable despite the cold. (SM) 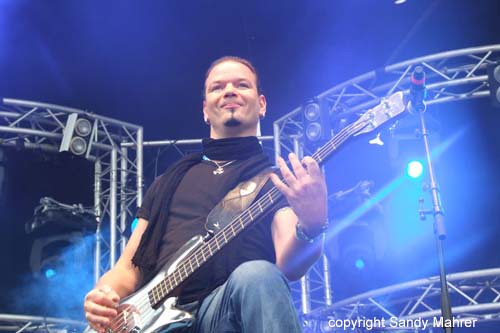