After touring Russia/Ukraine and performing on ships between Finland and Sweden, Poets of the Fall played once again in their home country. As always when they play in Helsinki, quite a few international guest came to see them, too. Those fans soon filled the first few rows, but otherwise the venue remained empty until shortly before the show. I blame it on the beautiful summer weather.

A little after midnight the concert started, and it didn’t take long until the club was rocking. Poets of the Fall were welcomed enthusiastically the moment they walked on stage, and from the second song “Locking up the sun” the audience was clapping along. Nobody really cared that the sound in the pit wasn´t all that great in the beginning, i.e. the vocals were not loud enough. Everyone who was that close to the stage knew the lyrics anyway, and soon the problem didn´t exist any more.

The current setlist is more powerful than last year´s, due to the fact that ballads and rockers have been mixed a bit more and there are a few faster songs in the beginning, before things slow down. This helps setting the mood for a rock show, even though I personally preferred “Running out of time” as the opening song. Of course they did more to the setlist than just mixing and added some old favorites like “Don’t mess with me”, “Sleep” or “Everything fades” from the first album, which has not been played for six or seven years.

Songs from the current album and all those in between were there as well, as to be expected from a 10th Anniversary Tour. Thus, “Delicious”, a song from the second album started the concert. The mix worked well, the audience liked it, and after the last notes of “Lift” had run out and drummer Jari Salminen took a bow, everyone could happily make their way home. 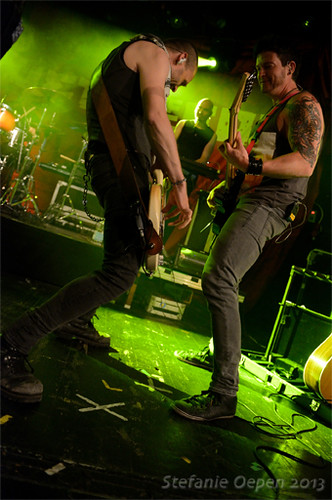 In-between there were roughly 90 minutes of listen-to-quietly, sing-along-loudly or dance-a-bit, an energetic band in a great mood and an audience that appreciated these ingredients. It was fun not only to watch the band, but also their interactions with the audience. Fans were bestowed with smiles, handshakes or showered with water, and towards the end of the show, singer Marko Saaresto accepted a red mask from a fan and wore it for a while before giving it back. Guitarists Olli Tukiainen and Jaska Mäkinen as well as bass player Jani Snellman often got close to the audience too, literally, when playing standing on the boxes at the front of the stage.

At every Poets of the Fall concert, the interactions of the band members and the small things make the evening special for the fans. Things like seeing „Captain“ Kaarlonen leave his spot behind the keyboards during “Illusion & Dream” to toast to them or watching Jari grinning all night, obviously happy to be part of a Finnish gig once again. During “Late goodbye”, Olli showed how little the “little things that make the world” are and Marko surely had fun exploring different ways to make use of a bar stool. Overall it was an evening of great moments that ended much too soon. I am already looking forward to the next concert.

Setlist:
Delicious
Locking up the sun
Kamikaze love
The ballad of Jeremiah Peacekeeper
Given and denied
Don’t mess with me
Temple of Thought
Everything fades
Cradled in love
Stay
Running out of time
Illusion & Dream
Diamonds for tears
Late goodbye

Borknagar: It´s Just How we Sound