The young band Lost Society was lucky to open for Overkill for the Finnish dates; they released their debut album “Fast Loud Death” a few weeks ago, a super fast energetic piece of modern thrash metal (also read our interview). The leader Samy Elbanna isn´t shy at all and he performs with much self-confidence, which is actually surprising for a 17 year-old. The whole band actually doesn´t show any sign of hesitation and they all give 200%, jumping and running around the stage. Their restless songs work perfectly live and the crowd was receptive to them. I´m glad Lost Society doesn´t fail at conveying live the same attitude and energy that we can hear on “Fast Loud Death”. The boys don´t take themselves seriously and their live performance is modern, fresh, dynamic and fun – just like the album. 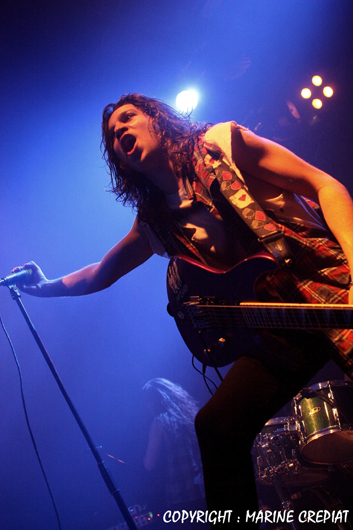 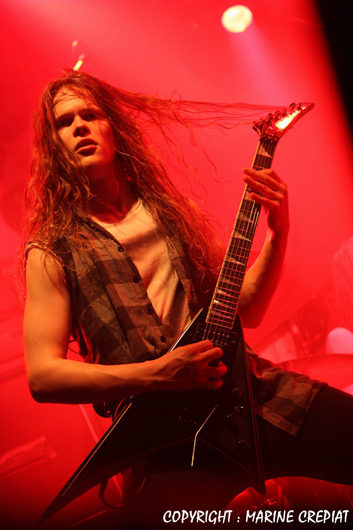 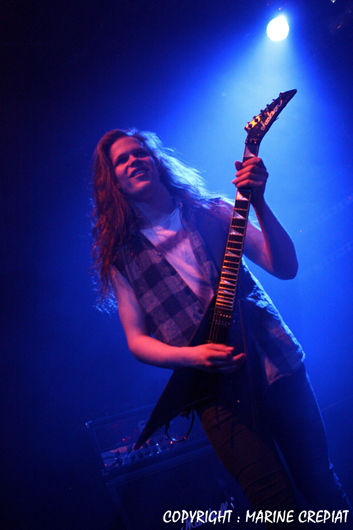 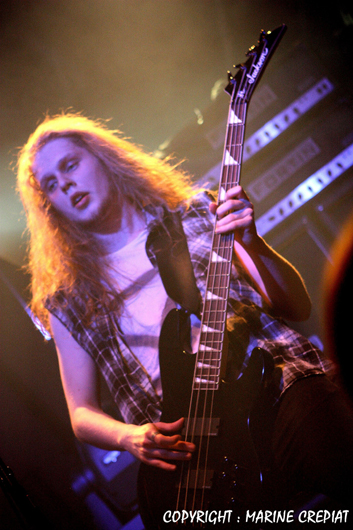 I must admit before I had some doubt regarding their live performance, as they are very young and don´t have much live experience. So I was really surprised when I saw their professional performance. You just couldn´t tell the band has been around for barely three years and that they´re all under 20 years old… this is a very promising act, and it´s just the beginning of a successful career for them. To make it short, Lost Society delivered a pretty amazing performance.

Barely 30 minutes after Lost Society set, Overkill hit the stage, to support their latest album “The Electric Age”, which is easily one of the best Overkill has ever released. This album is once again a clear proof that the American band hasn´t lost any motivation and that is still very inspired, although they´ve been around for 30 years now. 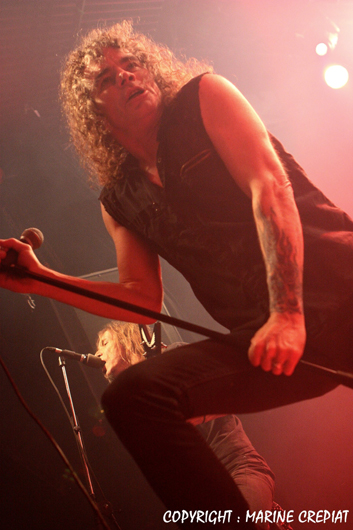 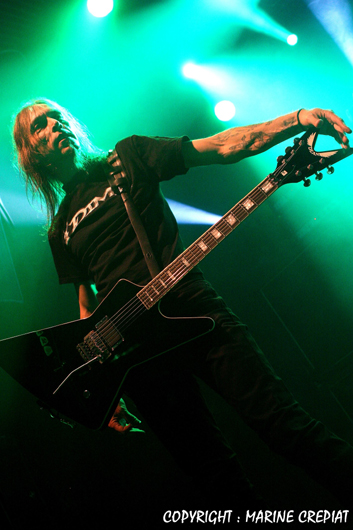 The band has barely got on stage and the crazy singer Bobby is already owning it, jumping around; Bobby is very impressive: he´s bursting with energy during the entire show without showing any sign of weariness. He just couldn´t handle better his role as a front man and he manages to get the audience´s attention without any difficulty. Besides his charisma, he´s able to spread his energy among the whole venue. His crazy facial expressions, the way he plays with his microphone and of course his characteristic high pitch voice make him very unique. You just wonder where he gets all that power and energy from !
Even if the singer Bobby Blitz and the bass player DD Verni are the ones who get the most attention from the audience, other band members would also deserve some – like the drummer Ron Lipnicki, who delivers his parts with high precision and technicality. 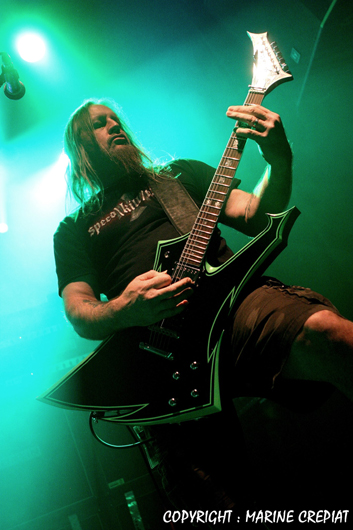 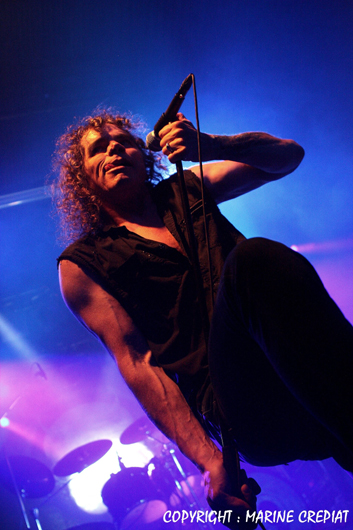 Thrash metal can be a bit restrictive as a genre. Overkill is labelled as a thrash metal band, still its sound includes and blends much more influences – punk/hardcore, heavy – to produce a sound of its own. On stage, we also find that musical diversity through the band´s performance.. Overkill doesn´t really fit into the cliché of the typical thrash band because it embraces and delivers much more. 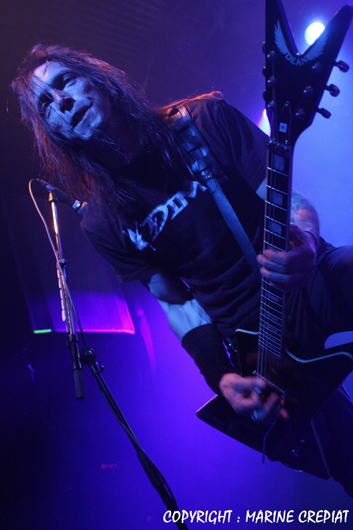 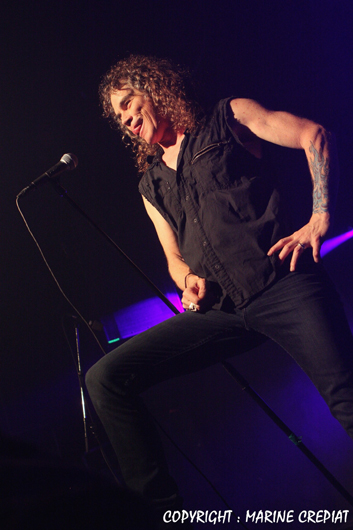 It´s getting pretty hot in the venue now and the atmosphere keeps on rising, especially when the thrashers start to play their hit songs ( “Rotten To The Core”, “Hello From The Gutter”, “In Union We Stand”,). Overkill doesn´t need more to turn the legendary Tavastia crazy. As for setlist, no big surprises there. The Americans played songs from “The Electric Age” mainly, and of course they did´t forget the most awaited hits; songs which are pretty varied to give a good rhythm to the show.
Bobby and his band mates didn´t have any difficulties spreading the chaos in the venue. It´s pretty crazy to see Overkill guys are still great in studio as well as in live performances. Well done ! 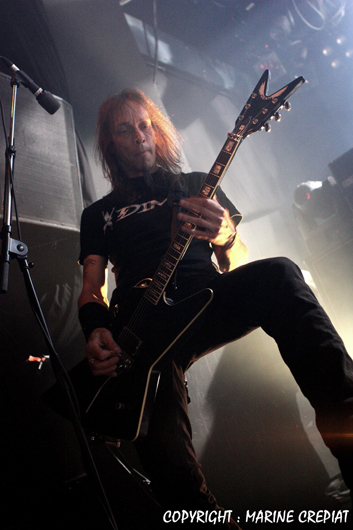 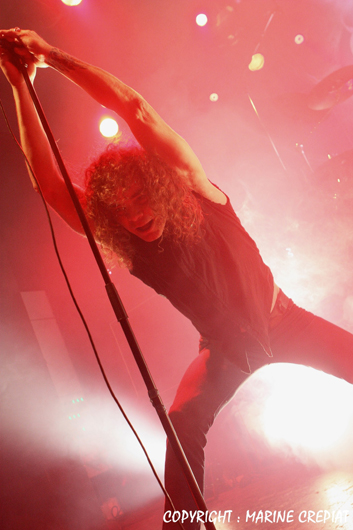 - nicht mehr aktiv - - Reports - Reviews - Photos Passionate and curious by nature, I'm interested in ways through which I can express my opinion and communicate my feelings. Writing, photography, singing, drawing, languages... are the main things I keep myself busy with ! As for music, my favorite genre is music that speaks to me and that conveys a certain atmosphere. It can a be a pop or a metal song, some thrash or death metal tune... so the actual genre doesn't really matter to me. 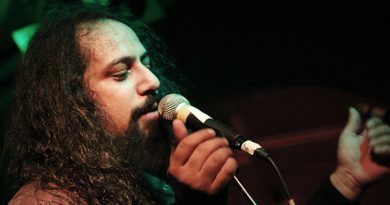 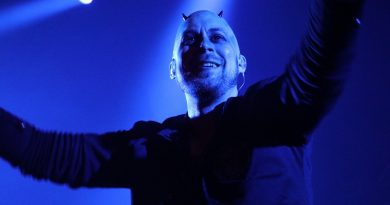