Only days after Barren Earth presented Jón Aldará of Faroean doomsters Hamferð as their new vocalist, Turisas announced that the guest keyboardist on their – now ongoing – lengthy spring tour would be none other than Barren Earth´s Kasper Mårtenson. In spite of being busy rehearsing for the upcoming shows, Kasper took the time to tell us a bit about the busy times ahead…

Have you had a lot of rehearsals yet?
No, two!

Only two?! So how´s your feeling, based on those?
Good! We rehearsed for the first time last Thursday, and then again on Friday. It went well, we managed to play all of the songs I’d been assigned to learn, just as planned. Sometimes we had to interrupt and re-check a part, but basically I know them all by now. There are some minor details I still need to go through, but all in all we’re almost there. 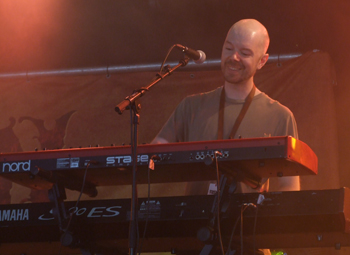 How about a dress rehearsal in full costume?
No, because the costumes are already on their way! The containers were already shipped last week.

So how much time did you have to prepare for this mission?
Quite a lot of time, actually, we agreed on it at the end of November. The reason why only now we got around to rehearsing is that the other guys were all on vacation around the end of the year. Last week finally everyone was in Finland at the same time, at the last minute!

How did this collaboration come about?
Turisas used to share a rehearsal room with Barren Earth, that’s where I got to know Mathias. And then in late November he contacted me, “hey, we have a six-week European tour booked and need a keyboard player…”

Would be interesting to see you with them, are you gonna do any shows in Finland?
Hmm, I know Turisas have some festival gigs in summer, at least Nummirock. But I don´t know… for now we’ve only agreed on this European tour and then the US in April, the Paganfest shows. That was just added recently – they booked me for two tours before I had even played a single note with them!

That’s what I call trust!
Apparently, yeah! But anyway, that’s we have agreed on so far, so that’s all I’m concentrating on now. I don’t know what’s gonna happen after that but I’m not thinking about it yet.

Some twenty years ago you left your full-time band [Amorphis] because they were touring too much, now you volunteer to set out on the warpath with a bunch of guys you hardly know. In what ways has your attitude changed?
Well, in the course of twenty years you learn to see some things differently. I feel that I’m more open to new things nowadays, a bit more adventurous. Barren Earth went to America three years ago, and that was an extremely rewarding trip. Without that experience, I wouldn’t have gone for this one now, because it would have felt too radical to just spontaneously go on a six-week tour. But the one with Barren Earth was a hell of a great trip, so why not. Once in twenty years it’s okay to do a proper tour of Europe!

Your American tour diary was great!
That was fun to write! In a way, I’d like to do something like that again now, but it would be different. With Barren Earth, I sort of acted as the official spokesman and wrote on behalf of the whole band. This time I’m not a full member, so it would be a different perspective. But let’s see, maybe I’ll write something if I find the time and inspiration.

Speaking of Barren Earth, what are your plans for the near future?
Well, Barren Earth’s plan is to enter the studio in early March, which overlaps with the [Turisas] tour. That was one of the issues we had to figure out. I asked the other guys what to do, but they said it’s no problem, I can add my keyboard parts later. We’re not recording the full album yet anyway, the studio time we booked is not enough for that. We’ll do four or five songs, and since all agreed that I should do my tracks later, we’ll chose songs on which the keyboards are not that dominant. In practice the others will go to the studio now, and then I’ll record my parts as soon as I’m back. But this is only the first part, and I don’t know yet when we’re gonna do the rest of the songs. Perhaps in late summer or autumn.

Tell us a bit about your new line-up…
Well, Jón – it should be pronounced “Youn” but most people call him Yon or John – is a uniquely talented singer and a really nice guy. The first time we met him was last summer, he came to watch our show at On The Rocks just before Tuska. Then later when Mikko Kotamäki quit, it was Mikko himself who gave Jón the tip that it might be a good idea for him to apply for the post, and he was clearly much better than all the other candidates… It sure doesn’t make the band’s operations any easier that he lives on the Faroe Islands, but on the other hand our activity has always been irregular anyway. Time will show. But he’s an amazing singer, and in the end that’s what counts.

How many candidates did apply for the job?
I don’t know exactly, because it was mostly Oppu who handled the recruitment. Many were interested, even from abroad. Dozens, and many of them forces to reckon with. From Finland we received a lot of good applications, but we unanimously agreed that Jón was the best.

Were you familiar with Hamferð beforehand?
No.

Is Jón going to take part in songwriting? Mikko only wrote lyrics a couple of times…
Mikko wasn’t particularly active. He did a few things here and there, but usually the distribution of work was that we wrote for him, and in that respect things are about to change. Jón is the type of guy that does things in his own style. Already now – we rehearsed the songs we had given him to learn, words and melody lines included, and he said, okay, but I’d prefer to do it my way. So we tried, and he had already written his own lyrics and melodies! And it did work better, more natural. When you’re a singer, it’s certainly better to interpret something that suits you well.

And personal involvement might help to ensure commitment…
That, too, absolutely. If you sing your own lyrics, of course the emotional ties are much stronger.

What’s the general direction of your new material?
Some elements will be familiar from our earlier records. But there is other stuff that is breaking away from that and leaping towards more progressive modes of expression. The material is going to be more varied. I think our first two albums resemble each other in a way; Oppu has a very strong identity, you hear something and know it’s Olli-Pekka Laine. There will still be some of that. I have my own identity as well, which is a bit different, and that too is still there. But in addition, there will be elements that are different. At least I hope so! I cannot yet give a definition of what the third album will turn out like, but I believe that we’re charting territory that we haven’t been to before.

Given the interruptions in the making of this album, when can we expect its release?
Well, Barren Earth releases always tend to be late. We hope to get it done this year, but I´m not betting on it yet. Of course it would be great, but… this year or next.

Is Barren Earth going to play any shows this year?
None are agreed on yet, but there have been preliminary talks about doing something in summer. But it´s not easy because of Hamferð’s schedule…

So how about yourself, do you still have time for any of your other projects?
Not right now, with all of spring dedicated to Turisas. But after that we’ll see. I did a theater project last fall at Studio Pasila, that was a lot of fun and I like doing things like that whenever possible. But Venho [Kasper’s acoustic band] hasn’t been active for a while; it turned out to be difficult for six rather busy people to find time together in the long run. In recent times I haven’t even tried very actively to make it happen. But I do write songs and new ideas keep coming all the time, and the plan is to continue some day. But at the moment the Turisas tour is so massive that I cannot really concentrate on anything else.

Are you able to make a living from playing music?
No, I still work as a tourist guide. I’ve also started to guide tours at the Haltia Nature Centre in Nuuksio National Park. Do you know it? 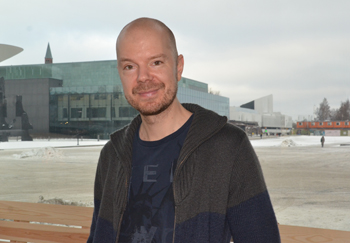 I’ve been to Nuuksio, but I don’t know Haltia…
It’s all new. It was opened last summer and is Finland’s biggest all-wood public building.

And what are your must-see recommendations for Helsinki itself?
If you have just one day in summer, then it’s Senate Square and the cathedral, Temppeliaukio church and Suomenlinna.

Do you also have some favourite special place beside those official sights?
Not really – Helsinki’s main attraction in summer is nature, so enjoy the parks, or the forest if you have enough time, and Seurasaari. But my own field of specialisation is history, I’ve always been very interested in that and enjoy sharing it with other people. After all, Finland has a fascinating history, and if you can make it come alive for example by talking about the Russian period right there on Senate Square, listeners will really get into it!

So now that the upcoming tour will lead you to Russia and all those other places, which ones in particular are you looking forward to?
I’ve been to St. Petersburg but never to Moscow, so that will surely be fascinating. That whole Turisas tour is unbelievable, with so many countries I´ve never been too before. Of course now that it’s cold, Spain sounds exceedingly tempting. Kiev, on the other hand, fills me with some apprehension. If those [riots] continue, I’m not very sure I want to go there…

Let’s hope it’ll calm down by then…
Yeah, hopefully. But we’ve been hoping that for two months now… anyway, yeah, Spain and all those places I’ve never seen or not in a long time. Lyon, Bordeaux, Cracow – I’ve played in Warsaw but never in Cracow, although I’ve heard a lot about it. And Prague I’ve visited before, but it’s always a great place to see.

Thanks a lot, and have a great trip!
Thank you! 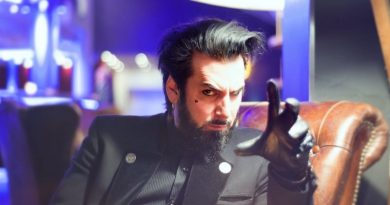 Aurelio Voltaire and the 7 deadly sins