When you see Batman listening intently to the Dark Side of the Force, perhaps to learn a few more tricks, it’s definitely the time of year all geeks, cosplayers and gamers have been waiting for. After Fantasy Basel had to be postponed many times because of – you know … it finally worked out. Many have used the hiatus to upgrade their gaming skills, to perfect their cosplay and to learn new skills. This time, the decision was made to use the larger halls, simply to keep the mandatory distances and to offer the visitors plenty of space. With 45,000 visitors this year, they were despite the pandemic only 9000 below the record year 2019.

Right at the entrance you can see the joy in people’s faces to finally be among like-minded spirits again, to meet old acquaintances and friends, to finally hug each other again (even if this was not recommended by the organisers) – simply being social again. The admission process was well organized, so that everyone got in quickly despite the vaccination certificate check.

Yes, it feels strange to be back at an event after such a long time, in fact the first since February 2020, but the joy of finally having a bit of normality again outweighs everything.

While Friday was a cozy family affair with fewer people, the halls were very crowded on Saturday. Although the larger halls offered more space, Saturday felt less pleasantly because there were long queues everywhere and not enough seating options.

It was clearly an underrating of how many visitors to expect and this was also reflected in the hall structure and the exhibitions. Big exhibitors like Disney or the Wasteland Warriors group were missing. Which was understandable, but still a pity. A large part of the usual gaming section was also absent, which took away a bit of the fair’s diversity. Due to the move to Hall 1, everything was much more spread out than in previous years and therefore also more confusing. 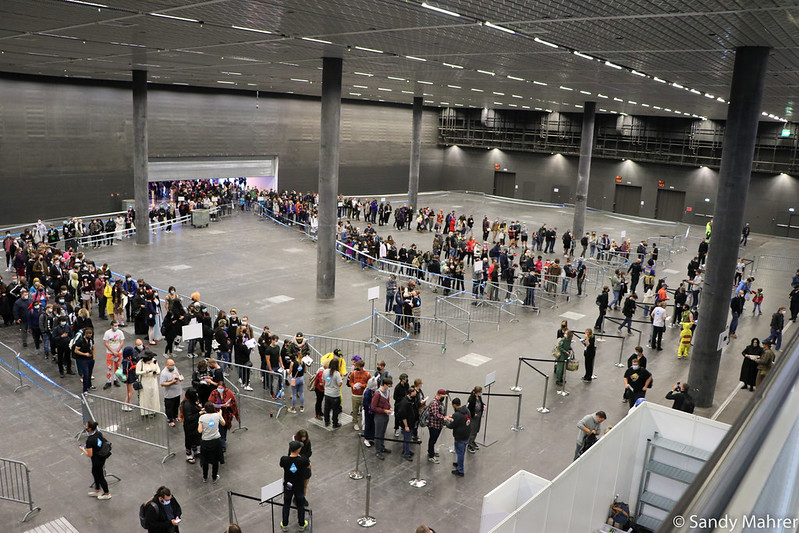 They filled a lot of space with Street Art and the Tattoo Village this time, which was certainly a good idea, but it seemed to me that it wasn’t that well attended. Meanwhile, upstairs, the Artist Alley and comic artists and also the cosplayers were squeezed into a smaller space, which could have been made bigger this time.

What they had unfortunately underestimated too were sufficient drink suspenders and bars. Or at least they were small and difficult to find and you had to wait longer. Except for the Japan Village, the food stalls disappointed a bit, because everything was the same on  every floor: burgers, hot dogs, pizza, chips. No wonder there was a run on Asian food on all three days.

Somehow, after three days, I just had the feeling that I had walked around everywhere, but still hadn’t seen much of everything, even though it was there, simply because of the hall layout. And somehow also because of the sparse light situation – in the circular hall only from the large windows – and the lack of quick access to fresh air. That was only possible in one place here, and at least on Saturday it was always pretty full.

But as I said, of course it’s a state of emergency and they made the best of it, following the rules and regulations. At this point, a big thank you to the crew who took on this task and made such an effort to hold this event, despite the situation. 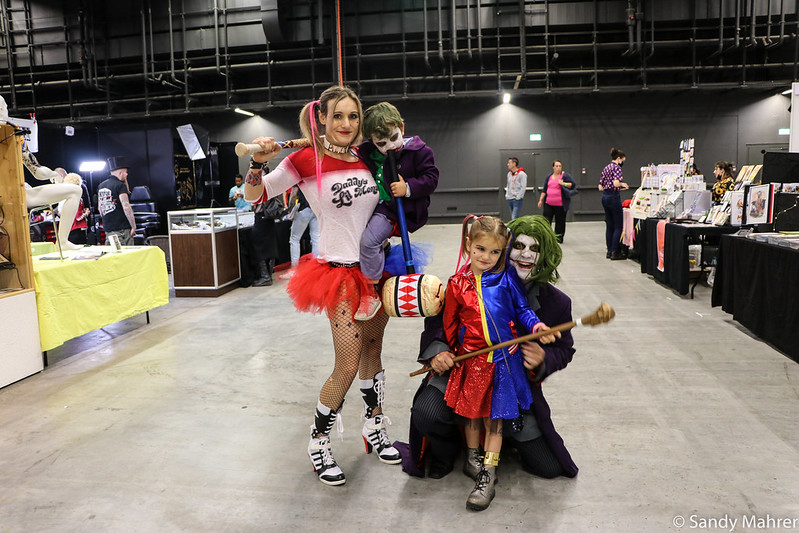 As every year, some special guest VIPs were not to be missed at the Fantasy Basel, this year Superman – Dean Cain. Together with Torrance Coombs, he spoke about their joint project (Reign, The Originals) “Little Angels”. Other VIPs included Anna Shaffer from Harry Potter and John Howe, who worked as a concept artist on Lord of the Rings and the Hobbit trilogy. 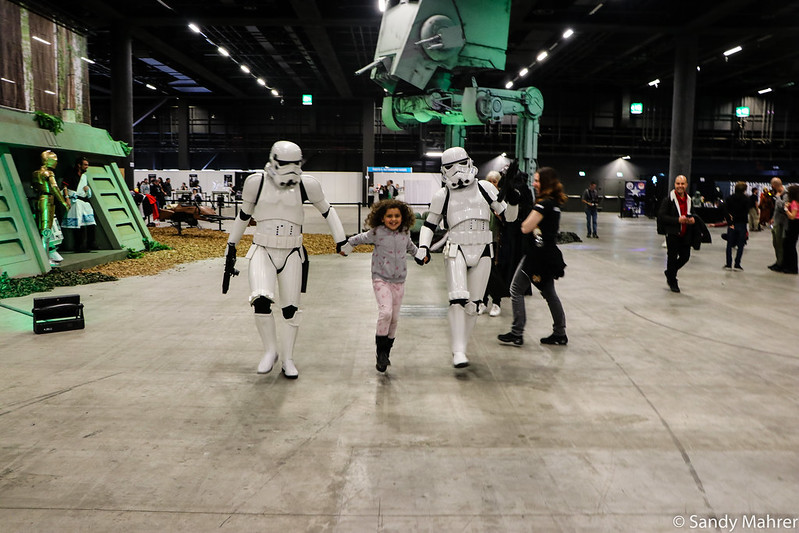 Of course, no fantasy con is complete without a whole bunch of Star Wars Universe stars, which certainly include Femi Taylor, Brian Muir and Hans-Georg Panczak. Femi Taylor played the dancer Oola in Return of the Jedi: she is the only actress who stood in front of the camera again in her original costume for some scenes – after 16 years – for the Special Edition. Brian Muir was the artist who gave Darth Vader his look. And Georg Panczak is the German voice of Luke Skywalker. They talked every day at the panels about their involvement in the most famous films in the universe, together with the press officer of the 501st Legion Swiss Garrison, Florian Bösiger.

He and his colleagues probably took up the biggest space at the event and without these giant props, the show would have been a flop. A huge Star Wars Fan Zone was set up with equipment made by Star Wars Fan Project X1, including various photo sets, TIE Fighters and an AT-ST. Thanks to numerous cosplayers of the 501st Legion Garrison from Switzerland, Germany and Luxembourg, the visitors could take photos with Sith Lords, Mandos, Rebels and Stormtroopers and admire how well these costumes are made.

A Star Wars fan film also premiered at Fantasy Basel: “Renegade” was shown for the first time on Saturday at the Movie Stage and you should definitely check it out. There’s a lot of heart and soul in this short film.

Of course, besides the Star Wars characters, there were also wonderful other cosplayers at the con – group cosplay for the première by various cosplayers on Saturday, other characters from numerous films, series and games – you could hardly stop marvelling at how great these costumes are and how much effort and time was put into them. My highlight was definitely La Muerte and Xibalba from “Manolo – Book of Life. “Thank you both for this beautiful idea and the great realisation. 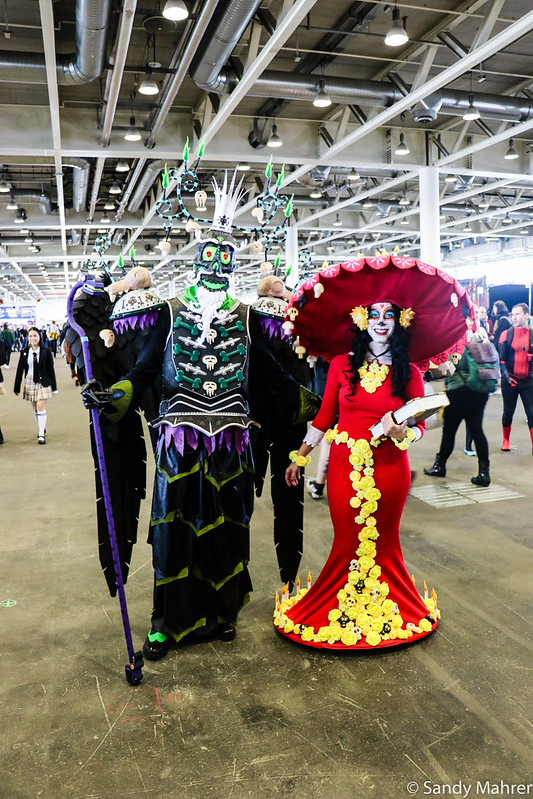 Like every year, the best cosplays were chosen each day by an international jury of professionals, this time Lightning Cosplay, Maul Cosplay, Pretzel and Sumi Cosplay – who came all the way from the United Arab Kingdoms and performed a little song on Saturday and Sunday.

At the contest, there is always a cosplay catwalk and while the jury deliberates, everyone can show their costume without being judged. Guys and girls, next year please stand still in the middle for a moment so that you can be seen! Most of them always scurry over the back of the stage, which unfortunately, like every year, is barely lit and thus you can hardly see anything of the costumes. So please play super model, step into the spotlight and show yourselves, we are here to watch you!

Other professionals such as Kamui Cosplay, who always had long queues in front of their stand for a picture with the cosplay star, or Polygon Forge, who bagged one prize after another with their costumes, were represented at the convention. 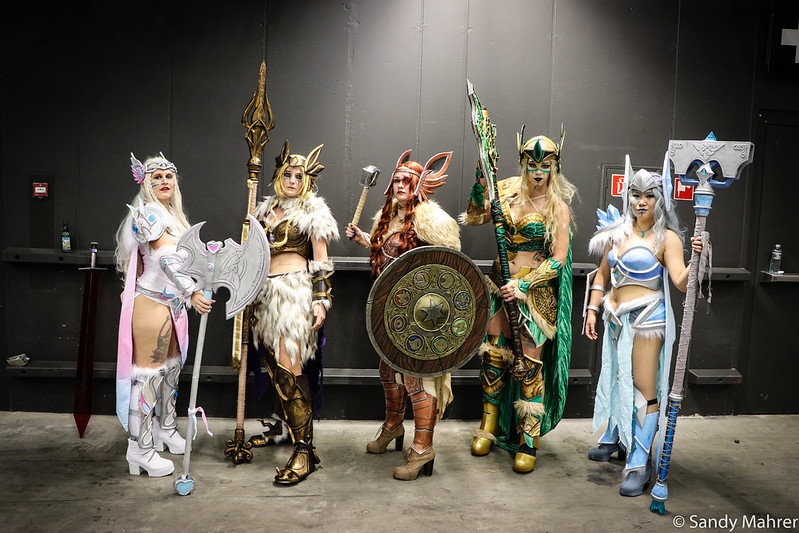 To mention all the wonderful artists of the Comic and Artist Alley or the authors present would go far beyond the scope of this report, so we will introduce you to some of them bit by bit in the time until the next Fantasy event, as we have already done with Nicole’s Art or Enie Cosplay. But even now it’s worth visiting the Fantasy Basel website and checking out the featured artists, maybe you’ll find a spot for one of their beautiful works of art.

What can I say – it was a good event for this special time, it was nice to be outside again and they have tried to make the best of it.

A big thank you to all the volunteers who work at the Fantasy Basel every year – without you an event like this wouldn’t be happening! If you would like to take part – you can already sign up as a helper for the next Fantasy, which will hopefully take place in May 2022: https://www.fantasybasel.ch.

Until then, work on your cosplays, practice your gaming skills and support the artists around you!