French neofolk band SKÁLD was formed in 2018 by producer Christophe Voisin-Boisvinet, and on October 17, 2022, the band played in Ääniwalli, Helsinki. This is the first tour of the band that, in fact, involved FennoScandic countries. During our interview on the date, the band seemed curious about how they will be received in the lands where their inspiration and original texts are coming from. The majority of the lyrics are from Edda and are performed in Old Norse – the band works together with experts in the language to get as close as possible for the verses spelled correctly. The band starts from the tradition as its roots, yet aims for its compositions to sound contemporary.
GALLERY HERE

2022 was a year of significant changes for SKÁLD, that, simply speaking, changed the whole lineup. As the tour goes on, many fans online are discovering that Justine Galmiche has parted ways with the band and there is a new singer, Lily Jung. The band seems to remain distant from commenting in detail about what happened, while Justine has commented online about going with her other interests. So, there is a new line-up for the group since 2022, consisting, apart from Cristophe, of Steeve Petit, Marti Ilmar Uibo (both – drums and vocals), Ravn (traditional instruments), Julien Loko (vocals, Irish bouzouki, talharpa) and Lily Jung on vocals. Lily is known as a performer of Mongolian traditional music and as a participant in the French version of “The Voice”. Other musicians are also coming from their past careers and they are very capable.

The night was opened by a French hurdy-gurdy virtuoso Guilhem Desq (who also plays his drums and sings). Regretfully I only knew a slightly wrong early version of the schedule, therefore captured only a few last songs. Clearly, it was a very matching warm-up for the SKÁLD, hurdy-gurdy being one of the most beautifully sounding traditional instruments. Unlike the common case in Finnish clubs, when most of the audience shows up only for the main act, the venue was already pretty packed for Guilhem.

Attending the first gig ever in Finland, I could not compare the impression the new SKÁLD lineup makes compared with the original. “SKÁLD is mostly a percussion band”, commented Christophe in the interview for Stalker, which will come soon. It becomes clear from the very beginning when Steeve Petit jump-starts the show by coming forward with a large drum; his drum station is located much closer to the audience than the rest of the band and he continues his wild, headbang-accompanied drumming throughout the show. From that moment on, SKÁLD music takes the audience over by force. Being in the first row with my camera, it is hard to remember what happened when – just a completely immersing experience, lots of drumming and singing and lights, with a good balance between songs. Extremely beautiful Sólarljód was one of the moments that I especially noted and even recorded on my phone – and compared to the studio version, I can tell that Lily’s vocals are indeed replacing Justine’s pretty well. Granted, it’s a different timbre, but certainly, nothing is lost and I would be very interested to hear a proper recording of this and some other old songs with the new singer.

An hour-and-a-half-long gig passes. As the band leaves and the crowd lines up for the wardrobe, I stop by the SKÁLD mastermind Christophe, who is busy packing up behind the FOH, unnoticed by the audience completely. His eyes are lit and he eagerly asks me, if have I noticed the two new songs the band played, handing me the setlist and pointing out “Ljósálfur” and “Troll Kalla Mik”. Surely he knows the material better than I do as I still feel pretty overwhelmed by the gig. I am leaving knowing this show was one of the highlights that happen to me maybe once a year. 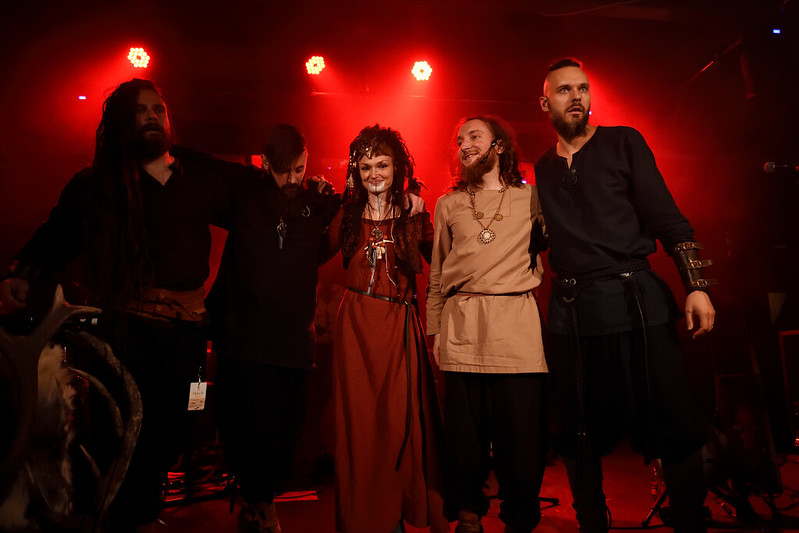