Is there anything nicer than a concert on a Saturday evening? I cannot think of anything. You have the whole day before and after to relax, and when you are nicely dancing, singing and partying through the concert evening, you might be in need for that. And the concert clearly was going to offer this, when the fans were queueing in front of the venue Markthalle, in the cold and desperately waiting to get in.

This Saturday evening was opened by the French support band CHUNK! NO, CAPTAIN CHUNK (start photo), who needed a bit of time to reach out to the  numerous fans that already made their way to the front of the stage – and this even though their music is fully rocking and catchy. The audience really enjoyed the band´s attempts to speak German, it clearly managed to lift up the mood and they were honored by applauding and enthusiastic shouts. When it comes to the music, it appeared more than just solid, even though the vocals were a bit instable. In the end, nevertheless, the band managed to inspire a little moshpit – and this is nothing that can be taken for granted at this early hour! 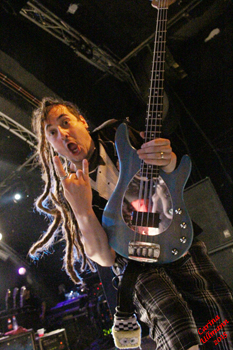 It continued with an overload of band-audience-interaction, thanks to LESS THAN JAKE, who didn´t just play their songs but kicked off a party. And this party was something the audience loved – they were dancing, going crazy, singing along on top of their lungs (it seemed like parts of the audience had just come for them) and the mood was laid back and full of euphoria. The band even managed to get the security in the photo pit to join in the jumping, they picked out fans to dance on stage with them, they got the whole audience to turn off their minds and enjoy. Moreover, they had no problems to get in touch with the front row – here and there a little trip off the stage and close up to the fans – this clearly impressed the audience. Talking about plus points –  the band did also manage to turn grown ups into little children by simply dropping balloons into the audience. (Not many were returned,, though, as people gladly kept them as souvenirs). 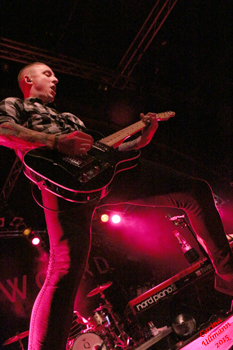 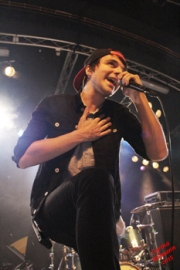 The main band of the evening YELLOWCARD fully convinced the audience and me – even though the interaction with the crowd was less focused on and also that fun-factor was not as high as it had been with LESS THAN JAKE before. But a clear and strong vocal performance made up for it; a slightly-too-loud bass and a violin (not always in tune) completed the overall well-working package. The audience simply ignored the little imperfections, created a really good mood so that there was no need to animate the crowd at any point in course of the concert. The setlist of the band was clearly a nice mix of older and newer songs, in which the more quiet parts brought the energy of the audience a bit to a halt, but for the band it was easy to inspire the crowd again afterwards.

Amorphis: Many things to do