L’Amour is in the air. Somehow for me Valentine’s Day is connected with a singing blonde with a great voice. Last year it was Inglorious in Cologne and Nathan James. This year it’s a blonde-gray Marko Hietala, who is a rather rare guest here live on stage – as I do not like any Nightwish vocalist who came after Tarja. However, he has other projects to enjoy, like Tarot or Raskasta Joulua or now his new solo project.

Basically I had expected the concert to be crowded, but maybe other concerts to choose from or the particular date were reasons only 400 people attended. The people present had their special somebody with them, or perhaps were just facing a relationship crisis…

But now to the concert: The openers Oceanhoarse from Helsinki, Finland, obviously enjoy that they can be part of this «Tour of the Black Heart» which might also open the door to record labels for them. Guitarist Ben Varon has made a name for himself with his former band Amoral and in Finland he also works as producer. (See HERE our interview with him.) His band colleagues  Oskari Niemi (drums), Jyri Helko (bass) and vocalist Joonas Kosonen are also quite well known in the Finnish Metal scene.  «We are Oceanhoarse, and we play Heavy fucking Metal». And indeed quite well, there’s nice dynamics on stage that inspires the audience besides the music. Helko’s swirling dreadlocks, Niemi’s steel-blue eyes, Varon’s waving hair and the power package Kosonen are eye catchers too. And then the band mascot Oceanhoarse – something between octopus and elephant – appears on stage. Those guys from Helsinki definitely left a good impression with their Switzerland premiere and with some luck could be playing here again soon.

More photos in the gallery

After a short changeover the headliner is due and you can hear Marko chants from the audience. Surprisingly there are hardly any Nightwish shirts to be seen, neither mainstream fans who would only attend because he is with a famous band. It’s mostly older people and those who truly appreciate Marko Hietala and his vocal skills. Hietala and his band colleagues, all quite famous Finnish musicians, enter the stage. They all seem relaxed, Marko is barefoot, which signals a very easy going concert evening in a familial atmosphere. You only miss some sofas on and in front of the stage for hanging out and enjoying this beautiful music.

Every musicians has his moments of fame with a solo: Keyboarder Vili Ollila (Raskasta Joulua, Northern Kings), Drummer Anssi Nykänen (Paula Koivuniemi, Havana Black) and Tuomas Wäinölä, who has worked with famous Finnish Pop/Rock stars (e.g.  Anssi Kela, Paula Koivuniemi) and visited Z7 back then when touring with Ex-Stratovarius singer Timo Kotipelto. All are passionate musicians just like Hietala.  «Pyre of the Black Heart» is a very personal album and shows Hietala’s vulnerable side, much softer than e.g. Tarot. Besides his own songs, Marko lends his unique fantastic voice also to some covers, e.g.  « Olet lehdetön puu» or «War Pigs» by Black Sabbat. Between songs he entertains the audience with little stories, which adds to the overall familial atmosphere. Everybody obviously has a lot of fun, just like a concert should be. For the final «Truth Shall Set you Free» Hietala switches guitar for a Cello. A very special and beautiful concert where you could enjoy listening to a world class star in a truly pleasant atmosphere.

More photos in the gallery 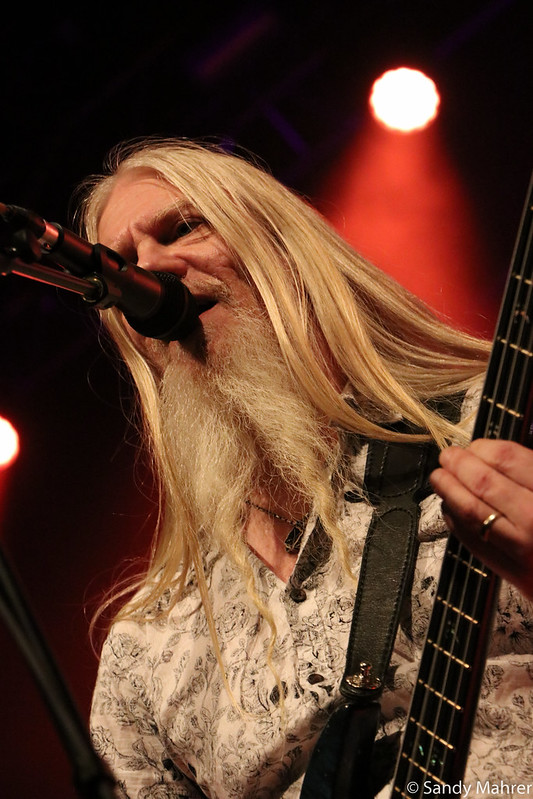