Well well, this is the first time in ages, that I have to queue at a venue to get in. I mean, we are talking about Finland. You don’t queue here outside venues, unless you are a little girl waiting to see some boyband, armed with plush teddies. But this is a metal concert. The dress up and face paint of some folks gives me a hint, that in fact some are not merely here for the main band, Pain, but for the support band, Fear of Domination. I had never heard of them, thus have no clue what to expect. But the venue is to my knowledge sold out, and packed already well before FoD begin. The space   of the stage is owned by devoted fans, so no chance to get anywhere near, and there is no security corridor in front of the stage. If you want, you can tickle the toes of the band members. So I go upstairs on the Balcony. 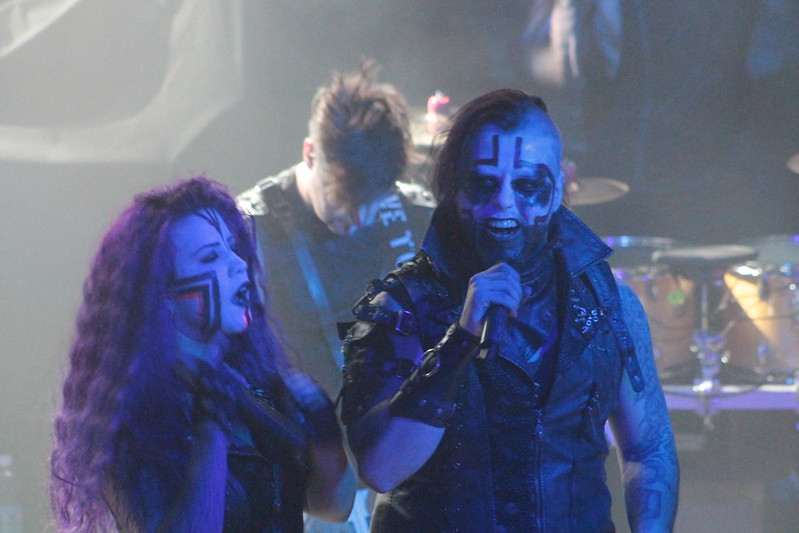 Then it’s swhowtime for Fear of Domination, and they are quite a feast for the eyes. The lot of 8 band members come onto the tiny little stage, with fluorescent face paint. You get almost 2 of everything: 2 lead singers, 2 guitars, 2 drums plus bass and keys. Doing my research I get to their webpage, that describes their music as industrial shock metal. The sound is heavy, typical industrial, with aggression here and there, but in the form of positive energy. Those folks don’t try to give you the impression that they are eating little babies for breakfast, but that they want to have a hell of a party. And that’s exactly what they do. The connection with the audience is there instantly, and especially the female lead vocals, by Sara Strömmer, who joined the band last year, are absolutely fabulous, in both growls and clean vocals. The male lead singer is Saku Solin. I am not the greatest fan of growls, but I like those folks! The other newer band member, percussionist Miikki Kunttu, can’t resist, and goes stage diving. The band performs 8 songs, of which I unfortunately know only the last one, ”The Bad Touch”, a Bloodhound Gang cover. At this point, the whole perfomance is one big party, and Sara grabs one of the golden Lions from the club’s decoration, to perform some dance on stage with it. Both singers jump into the crowd to sing this song together with the audience. What a show! Whenever they come back, I’ll be there.

During the 30 minutes break until PAIN starts, no one moves an inch away from front of stage. The place is really packed to the last spot, I have never seen Virgin Oil so full. 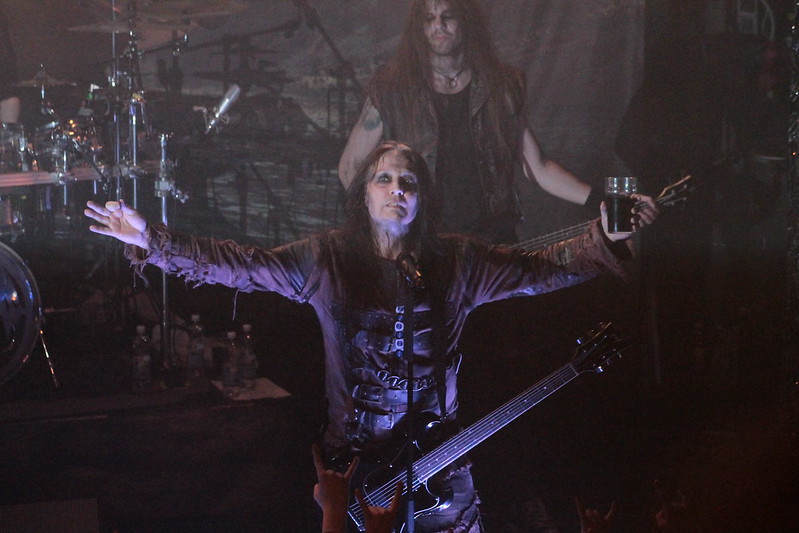 Billy Idol’s Rebel Yell serving as intro announces the arrival of tonight’s main band, and there they are! A charismatic Peter Tägtgren, with Greger Andersson and Jonathan Olsson. Drummer is no other than Peter’s son Sebastian. The kid is just 19 years old, but has been recording the drums on Pain’s actual album ”Coming Home” at the tender age of 17, and has been touring with Pain after that. He needs about 2 songs to warm up temper wise, but that kid is a hell of a drummer! The drum kit itself is illuminated in changing colours. Other than that Pain don’t need any fancy stuff for their show. Their music convinces as it is, and they make clear, that playing music is, what they came for. Some songs, like the current album’s title track ”Coming Home” seem played heavier than they are on the album.

So far I had seen Pain only on Festivals, and I always loved their shows. So this gig is something I had really been looking forward to. I love their typical heavy, stampeding sound with the atmospheric dark touch. Just the sound guy seems to be asleep every now and then, because Peter’s microphone is often too silent and at a few times completely off. But that can’t harm the overall atmosphere, folks go crazy. The balcony that I am standing on is bouncing, and I just hope it will last.

Pain had been touring almost constantly since autumn 2016, and this is their 3rd visit to Finland on the ”Coming Home” tour. The setlist has changed slightly from last year, when I saw them at Rockfest. Peter said in some interview, he keeps touring til he hates it. Well, so far no sign of that. The band is in a good mood, and Greger borrows a multicoloured cap with propellor from some folks in the front, before he goes climbing some dangerous high places once again. Peter keeps cheering to the crowd and encouraging to sing along at some songs, which everyone complies to willingly, and needs to ask his fellow band members every now and then, what’s next on the setlist. This setlist is packed with all in all 14 songs plus 3 in the encore. At the final ”Shut Your Mouth” that ends the show, every single one sings and jumps along, before the band marches out to the outro of Sinatra’s ”My Way”. Before that, Peter promises ”See you soon!” I certainly hope so, I’ll be there.