Sunrise Avenue hasn´t been touring in Finland that much, they´ve been traveling around Central Europe this past year, playing at clubs and festivals. So it was a real treat to hear that the 2013 international tour would start in Finland, offering something different. Because now the Sunrise Avenue guys have “a Big Band Theory”. And I´ve got to say – it works!

For this tour Sunrise Avenue has taken some of their songs and rearranged them so that they fit a big band setup. The band is accompanied by extra musicians on stage for the tour and the extra oomph they bring to the music is great. We heard awesome sax and trombone solos and really groovy percussions in addition to the “normal” (yet not the least bit less impressive) guitar solos and such.

I was totally entertained by the show in Logomo. The supporting act Superscar was unfamiliar to me prior to this, but seemed to be a band I may have to check out a bit better later. The bits I heard were played with a more acoustic sound and it worked well for their light pop-rock style. I kept thinking their songs would fit a relaxed Sunday afternoon. And what´s even more important, their set really did fill the function of being a supporting act to Sunrise Avenue´s material. The match seemed to be a good one.

When Samu Haber and his Sunrise Avenue crew came on stage, though, the moods of the evening started to flow with noticeable ease from the pop-rocking moments to the more jazzy ones and at times I could´ve easily imagined being in some hot salsa club somewhere else than in midwinter Finland. The band told us they had perhaps a more mature take on the songs on this tour, but they definitely didn´t make “more mature” sound boring. Quite on the contrary.
Some highlights of the concert were the trombone solo in “Out of Tune”, the way “Angels on a Rampage” grew from a soft and easy into a really strong power ballad, and by the time Samu started to sing “Fairytale Gone Bad” in Spanish, the audience was loving it. I was, too. I like the song in its original arrangement, too, but this version had a whole new level of groove to it. And after that, the band began “Happiness” with a pure country music arrangement, which then grew into a great and complex Big Band number of good feel. When Samu asked the audience to stand up, there was no hesitation in the crowd. In “Stormy End” the guitar solo brought Santana to my mind, and since I do love a good saxophone solo, I couldn´t have been happier when they had an excellent one in 6-0.

The concert ended with a fun medley of all sorts of stuff, ranging from “Gangnam Style” (audience participation by singing was expected) to the local ice hockey team´s support song and a James Bond theme song “Live and Let Die” – and finally to “La Bamba”. I never would´ve thought…
Encores were “Hollywood Hills” and “Nasty”, plus a fabulous medley of Blues Brothers extravaganza in the form of “Everybody Needs Somebody To Love”. When the band came back on stage for the encores, Samu had said he had been really doubtful about coming to Logomo – “There´s no way we´ll get a good crowd in there!” – but he was happy to have been wrong. The venue was, if not totally then at least very nearly, sold out and to me it seemed that many were really enjoying themselves.

After the gig I even bumped into some German fans, who had come all the way to Turku to witness this gig, and they seemed pretty happy with their experience. As was I. The evening in the company of the Big Band Theory Tour had been a well rehearsed and staged show and if Sunrise Avenue releases a Big Band Theory album, I´ll buy it without a second´s hesitation. 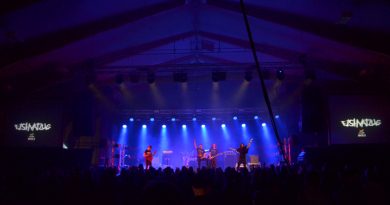