The Friday of this weekend had already been a blast with The New Roses and Fighter V – yet I am looking forward especially to this evening, because Eclipse guarantee a great show with fantastic music.

Punctually at 20 h the Danish Band Junkyard Drive featuring singer Kris, Birk and Ben on guitar, Sjus on bass and Claus on drums. Kris captivates us immediately with his fantastic voice and there’s also a lot for the eye on stage. Nicely styled those guys offer a lot of action on stage and their Hard Rock is some ear candy. A pity that most people decided to come later for the Eclipse show only. The people already present at the club do their best to celebrate those Danes on their first EU tour with their second album, and the guys deliver a fantastic show from beginning to the end. Keep an eye on those guys and buy their second album!

After a lengthy changeover it’s time for Eclipse. Those guys from Stockholm, Sweden, have a strong fan base in Switzerland, and those fans gathered in the first row, welcoming the band with “Eclipse” lettered balloons as they storm the stage with «Viva la Victoria». Front man  Eric Martensson seemingly has not aged at all since the last gig at Z7, especially when he shows his wicked smile. This gifted song writer provides us with his new album and a slight change in the band – on bass is newbie Victor Crusner, the little – or better younger and not so little brother of drummer Philip Crusner. The set list of tonight provides several new songs but also old hits that are obligatory for an Eclipse gig. For example «Battlegrounds», sung along by the audience even after the song is actually finished – at this moment Eric seems so touched that you wonder if it’s only sweat running down his cheeks… It’s great to have such an enthusiastic audience, and Martensson keeps thanking fans and entertaining them with stories about a song writer’s life, his own and also Magnus Henriksson’s, in a very likeable way. When he isn’t also playing guitar, he rules the stage, runs around twirling the mike stick – no wonder he is always exhausted after a show. 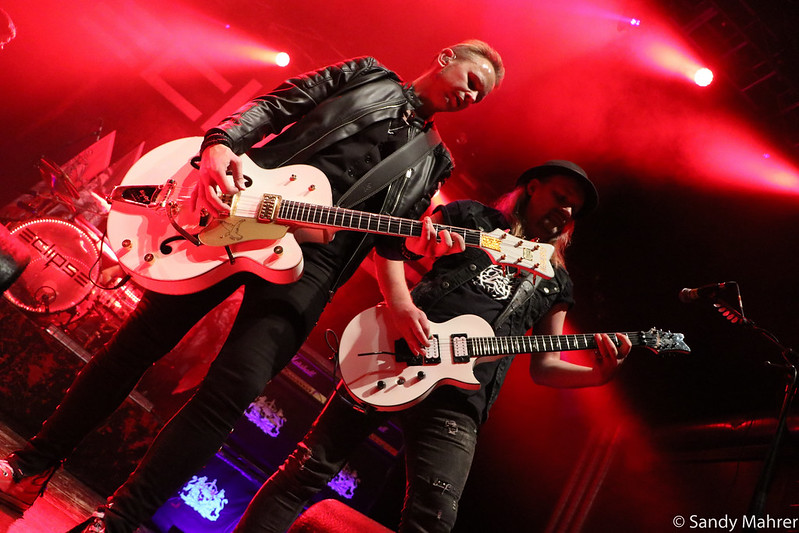 At every gig they have a song exclusively performed for this very venue, and this time it is a certain Gaby who makes the choice. She won a Z7 meet & greet she could choose, and being a long-time supporter and follower of this band, she naturally picked Eclipse. First she does not want to appear on stage, but after some hesitation she does, receiving a hug and a big thanks of the band for her support – which makes her tear up… How nice to see that musicians truly appreciate their fans. Gaby’s choice was «Bleed and Scream» and afterwards the band vanishes behind the stage, returning with  «I Don’t wanna say I’m Sorry» and with «Never Look Back» ending this 90min concert evening. Eclipse always deliver, they give everything on stage and are very grateful for the people sharing their time with them, singing along. A great band and a fantastic concert.