The big day has finally arrived, Tampere, Rammstein! The stage is a gigantic construction with all sorts of technical extras visible, and is for sure 3 or 4 floors high. The tower in its centre looks a bit like a Steam Punk church. The support band is the Duo Jadekok, two ladies who play classical music versions of Rammstein songs on two pianos. Not bad, but as a Rammstein support maybe a bit lame or too quiet. The audience is quiet and between songs there is only little applause. The two sit on another small stage above the audience. Luckily their performance is not too long. Those versions of Rammstein-songs is not bad at all, but I would prefer to listen to it at home while relaxing.

Then, finally, Rammstein enter the stage with the opener “Was Ich Liebe”, and black smoke is blown from the tower. They perform all in all 8 songs of the new album – and those songs work live very well. For “Puppe” a large stroller is brought on stage which is – how else could it be with Rammstein – set on fire! The song is one of the best of the new album! Naturally the old hits are not forgotten or old classics like “Heirate Mich” or “Sehnsucht”. In between there are more quiet songs as well: the beautiful “Ohne Dich” and “Diamant” from the new album, kept simple but simply beautiful. For all those who claim that Rammstein want to compensate with all the effects and pyro for the lack of talent, listen to those! Those songs will simply give you the chills!

Apart from that, they don’t save on special effects at all. During “Mein Teil”, Flake is roasted once again in a huge kettle, with different flame throwers. During “Pussy”, Till is riding a huge, penis shaped cannon that throws foam into the audience. And during “Sonne”, Till is wearing a bag pack that throws flames in a huge circle. The large tower is dived into different lights and spits smoke or flames from its ends. In the middle of the concert some kind of balcony is lifted, on which Richard Knuspe presents as a DJ his remix of “Deutschland” – which I cannot really recognize. And since I am not exactly a regular at clubs, this version is not so much my cup of tea. Luckily the original version is following right after that. The Duo Jadekok returns during the concert to the little stage for “Engel”, one of my favorite songs by Rammstein. The band joins them and sings or rather chants the song to fragile piano sounds. The lyrics are displayed on the screen on stage, so the audience can sing along. But they wouldn’t have needed the lyrics here, the Finns seem to know them anyways.

After the song, the band members enter some rubber boats, which are then carried across the heads of the audience via crowdsurfing back to the main stage, where Till is already waiting with a sign reading “Willkommen” – welcome, and next song is “Ausländer”, the first song of the first encore. Well well, of course the guys could not miss the chance for a political joke. There is a second encore, another classic “Rammstein” and after “Ich Will” and a massive 2,5 hour show filled with countless effects and pyrotechnics, the guys say good bye. I can only say THANK YOU Rammstein, what an incredible concert!

Text & photos: Melanie Kircher
Here the interactive gallery, or click on an image and enjoy via Flickr! 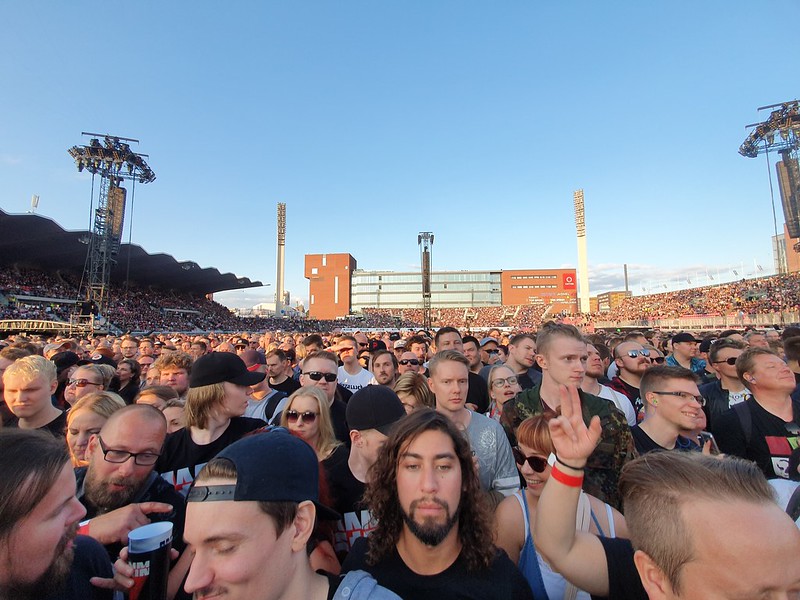