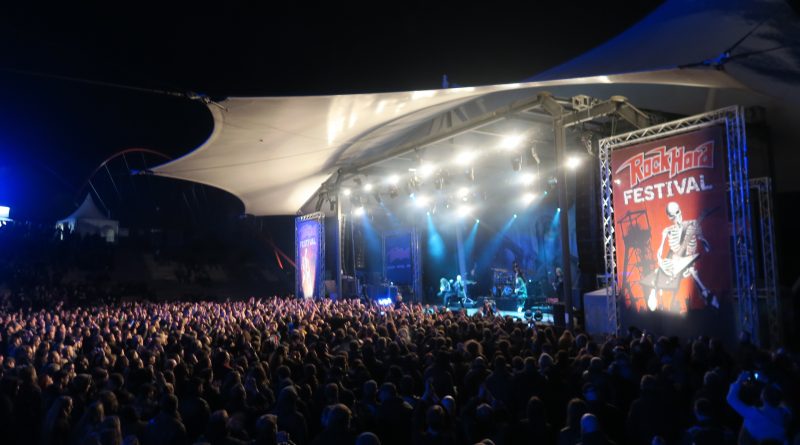 Friday
One or the other of our readers might have noticed that it’s not so easy to get to see the opener of the Rock Hard Festival when you start your trip on Friday. This year I managed to catch at least the last 3 songs of the German Death Metallers Sulphur Aeon – great music but the wrong atmosphere for this kind of Death-Metal, a club stage and lights would have worked better. The following Year of the Goat only get a quick check out because of the top acts about to follow, therefore I rather focus on merchandise and food. YotG attract quite a crowd with their Occult Retro Hardrock.

Satan is one of my personal highlights, even their intro “Into the Fire” has my heart beat faster. Trial by Fire opens a 50min journey into traditional Speed Metal focusing on the Court in the Act and Atom by Atom albums. Afterwards Tankard open the first part of this day’s Thrash Inferno, and naturally the arena fills up; crowdsurfing begins with the first song “Zombie Attack”. Gerre acts once again as experienced MC leading through the setlist which contains e.g. “The Morning after”, “Fooled by your Guts”, “Rules for Fools”, “Chemical Invasion”, “A Girl called Cerveza” and the final “Empty Tankard”. Another good show of this band, but not many surprises here.

Destruction is a different story, as their show had been announced as “Old School Mad Butcher Set”. With “Curse the Gods” from the Eternal Devastation album Schmier, Mike and Vaaver open the set, followed by “Mad Butcher”, therefore the mosh pit grows quickly to enormous size.

This setlist is definitely different to a ”normal” Destruction and a real treat, featuring also the former drummers Tommy Sandmann (until 1987) and Oliver Kaiser (until ’99). Yet Sandmann keeps “Antichrist” on a pretty simple level. The new album “Under Attack” is released on this Friday the 13th, therefore a new track “Second to none” is presented. What I find quite silly is talking about the ”big Metal family” in between all the time, just like Doro… Otherwise “Tormentor”, “Death Trap”, “The Butcher strikes back” (incl. Mad Butcher appearance) and “Total Desaster” from the first EP/Mini LP “Sentence of Death” – feat. Andy Brings on 2nd guitar – make quite an impression. The Venom Cover “Black Metal” is supported by Tom Angelripper and Gerre, and after Bestial Invasion it’s over. What a party, indeed!

Home ground for Sodom. Those Thrash legends from Gelsenkirchen had played Amphitheater around 2000, way too long time ago. Therefore they kick it off with “In War and Pieces” – no need to mention the huge circle pit that kept going thorughout the show. And not much talk by Mr. Angelripper. As far as I can remember, as I had started my party, too. “Outbreak of Evil” was obligatory, as well as “Nuclear Winter”, “M-16”, “The Saw is the Law”, “Sodomy and Lust”, “Blasphemer” feat. Grave Violator on 2. guitar, “Agent Orange”, “Remember the Fallen” and the encore “Ausgebombt”. After that a shortparty tent visit – really, just for a short time!

begins with icy temperatures – only 5°C at night, definitely my last camping experience here, next year I’ll book a hotel room! Accusser from Siegen and their Thrash don’t lure a lot of people from their tents, but still a number of fans can be spotted headbanging in the front row. Sorcerer from Sweden is the second Metal Blade band today offering some high quality doom. The band has been around since late 80s, managed to release only one demo, disbanded in 92 and then returned with a killer album in 2015. The band founded by basser Johnny Hagel impresses with Epic Doom songs like “Dark Tower of the Sorcerer”, “Northern Seas” and “Lake of the lost Souls”.

Tribulation at RHF seem – as well as Discreation – a bit weird, musically somewhere between Beastmilk, In Solitude and late Watain, visually they look like Fields of the Nephilim. Very interesting and indeed a hopeful in a genre that cannot be put into any category.
After that the epic Grand Magus who begin their great set with “I, the Jury”. The setlist of those great magicians – who play way too early – is filled with hits, e.g. From the Iron Will album “Like the Oar strikes the Water” and “Iron Will”. Only “Varangian” from the latest album does not quite appeal to the crowd, and the band is always pretty static. Maybe they could move a bit more on stage, but that’s the only thing to complain about here.
Let’s cut epic and melody. Let’s start a war …..Wattie and The Exploited unleash destruction, noise and chaos. Fantastic! Although the mohawk is a bit smaller now and the waist line a bit bigger, Wattie is still angry as fuck. Because of his Scottish accent you hardly understand anything more than Fuck, Shit and Bastard, and the audience reacts with violent Mosh and Circle pits. And The Exploited might be the first band here who manages to put more than 15 songs into their playing time – therefore no detailed playlist here.

They played “Troops of tomorrow”, for “Fuck the USA” Schmier, a big The Exploited Fan, joined in and for the final “Sex and Violence” it was time for Stage Invasion. Cool, I only wished I had reacted faster to join – dammit! Kadavar I hardly paid attention to, not quite my cup of tea. But afterwards Metal Church and the real headliners of the RHF Saturday. Although the new album is not that great, this band always kicks ass! Terminator Intro and “Fake Healer” from the Blessing in Disguise album – and the audience goes nuts. The setlist was a question of taste, in my (and several other’s) opinion they could have played more Metal Church and The Dark stuff, and especially “Metal Church” was missed. Or “Ton of Bricks”. Still a great set, including “Start the fire”, “Watch the children pray” and “Beyond the Black”.
Turbonegro was not my cup of tea. (BS)

does not begin well. It’s cloudy, cold and wet, and feels uncomfortable, and then it also begins to rain, making it even more uncomfortable.

The rain stops when Discreation begin, and although it’s 13:00 h, only a small group of fans have their ears blasted with Death Metal. The sound isn’t that great at first, but got better later. Despite less than ideal conditions, those 5 guys are highly motivated and give it all. The Swedes Black Trip bring the sun out, and also their Retro Rock / Metal sounds much more cheerful than the Death Metal of Discreation, which fills the auditorium. A lot of fun, despite the blasting bass sound. (TP)

It got a bit late the night before, therefore unfortunately I miss Black Trip and I don’t like Orden Ogan, therefore I hand over to Timo Päßler. (BS)

Nightingale is one of those bands you hardly ever get to see live, still there were not so many people present when Dan Swanö & Co begin their set. The first song remains instrumental, because you can see Dan singing but the sound man obviously cannot find the right switch. And the keyboard sound – inevitable for this band’s melodic Hard Rock – comes from an invisible instrument. During the set it becomes clear that this band has a lot of great songs but no entertainer qualities. As Grand Magus had booked the wrong flights, Orden Ogan pretty spontaneously switched slots with them. No problem as those guys Sauerland don’t need to travel far to Gelsenkirchen. Perhaps it’s this local hero status that the band inspires the first crowd surfers of the day. Or maybe songs like ‘Ravenhead’, ‘The Things We Believe In’ or ‘We Are Pirates’, here without keyboards. Quite many seem to know those songs and sing along. Great gig and great finale for their “Book of Ogan”-Tour. (TP)

The 90s Gothic Metal, popular until 2000, fell victim of this death wish it has been glorifying, thus only a few bands still maintain a certain status, and one of them is Moonspell. It is remarkable that the audience does not react much to new songs, but they have quite a lot of crowd surfers during their classics from the Irreligious and Wolfheart Album, which the set focusing on: “Opium”, Ruin and Misery”, “Mephisto”, “Vampiria”, “Alma Mater” and the final “Full Moon Madness”.

It’s time for Heavy Metal with Riot V who show with material from their ’79 Album”Narita” how it’s done. Singer Todd M. Hall has developed nicely in the past 3 years with the band. The new song “Ride hard, live free” is celebrated just like the old ones, where the crowd also sings along: “Fire down under”, “Flight of the Warrior”, “Road Racin” and the inevitable “Swords and Tequila” this hour passes way too quickly.
Death drops by for a visit: Corpsegrinder Fisher, Paul Mazurkiewicz, Alex Webster and two guitarists whose names I cannot remember – Cannibal Corpse. I can identify the first attack: “Evisceration Plague”, “I cum Blood”and towards the end they play “Hammer Smashed Face”. In the middle of the set it is difficult to spot the differences, but it’s a lot of fun like always. They seem to reach the maximum scale of crowdsurfing at this festival. (BS)

It has been 13 years since Blind Guardian have played here for the last time. Nevertheless everybody here knows the material of this band from Krefeld, and Hansi Kürsch & Co present a well mixed set of evergreens like ‘Nightfall’, Valhalla’ and ‘Imaginations From The Other Side’ as well as newer songs like ‘The Ninth Wave’, ‘Prophecies’ and ‘Sacred Worlds’. And ‘The Last Candle’ is a pretty rare one, yet there is nothing like the ”songs never before played live” as announced in the festival program. What a pity but easy to get over with such a festival set. Despite having 105 min, the longest slot at the festival, time flies by and the band has to hurry up to fit the final ‘Majesty’ into their deadline at 23:00 h. A worthy headliner of the festival and a worthy finale! (TP)

Fantastic festival! The Rock Hard Festival truly deserves its status in the German festival scene and proved it once again in 2016 with a flawless billing. For next year I had a wish – how about Bruce Dickinson giving a solo show? Booked for 2017 are Secrets of the Moon, D.A.D. and Candlemass. (BS)
photos: B.Schmiterlöw, T.Pässler 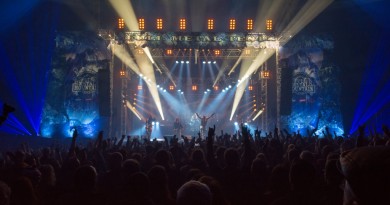