It’s not that often to see a Rock / Metal institution reaching adulthood – in this case the On the Rocks club Helsinki. Surely there has to be more than a cake and some balloons to celebrate, and the first of the weekend live festivities was this top three-piece.

Demonic Death Judge have made a name in the local scene and I have seen them live a couple of times too. Their raunchy Doom-Metal sound got the crowd right into party mood – although putting it like that it might sound a bit strange… In comparison with the acts to follow, the Demonic stage show seemed a bit minimalistic, yet perfectly fitting the music. I can only recommend to check out those guys from Kotka https://demonicdeathjudge.bandcamp.com/

Tyrantti  have made it quite quickly from underground clubs to the big stages, and also their debut album raised a lot of attention. And of course there is their unhinged presentation of their mix of Garage Rock, Metal and Speed / Thrash Metal with pretty melodic vocals. Metal ear candy you can sing along easily even though the lyrics are in Finnish. Those guys simply have a lot of fun on stage, which inspires the audience. https://www.facebook.com/varotyranttia/

The next band up celebrated their anniversary too – and they are even 2 years older than the club: Profane Omen. As announced only recently, this show would be their second last ever, the final anniversary/farewell show will take place on August 17th in Lahti. Because those guys are way too old to Rock’n’Roll? Well, I don’t think so despite the “old age” jokes front man Jules made when announcing songs. Apropos, his band mates challenged him a bit with a special set list – see here: “biisi” is Finnish for “song” …. The actual set list is among the photos in the interactive gallery below.

Yet Jules managed to get the surprise guest Tommy Tuovinen on stage in time – Tommy had replaced him for some gigs recently. Well, not much to say about the gig as such – a lot of action and mayhem on stage, as always with this band, and also the mosh pit never ceased to move. A fan could present a truly legendary band t-shirt on stage, and it seemed many rather took the chance to party hard with this band for a last time instead of crying in a corner… thank you, Profane Omen, for those many years of brilliant entertainment. And happy B-day, On The Rocks! 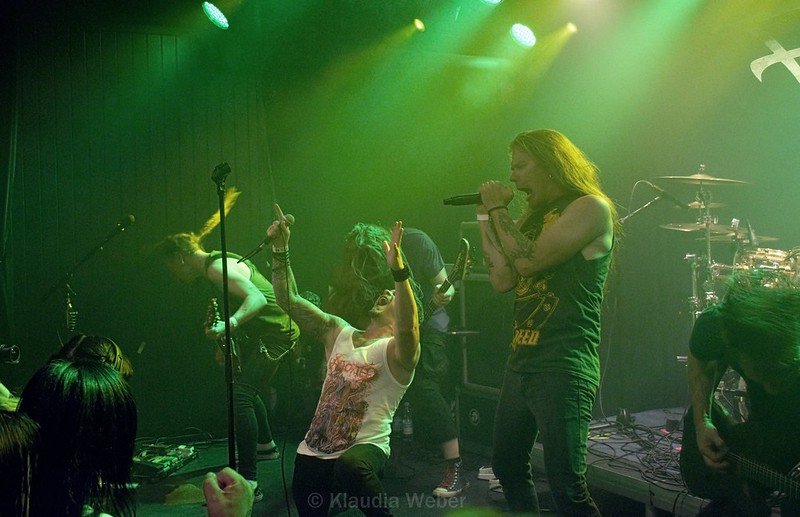