I have been looking forward to this concert, as Sonata Arctica are always a pleasure to watch. The venue, honestly, I wasn’t too keen on. I had been to Sellosali before, a venue like a theatre or cinema, with seats. You expect, that any moment someone will push in a cart selling popcorn and drinks. At those concerts before, the spark didn’t ignite, the distance between audience and band was too big. Some moderate claps between songs, and next song. So remembering that, I wanted to make the best of it.

BUT: this time should be different! As soon as the band enters the stage, you could feel the connection right away. The first song is the beautiful “Life” and as usual, it takes a few notes and Tony has the audience wrapped around his finger.

The band keeps seated this time, no running around the stage as we know it. But the energy isn’t any less here. The sound is perfect, no need for earplugs, I can simply enjoy the show.

Next up is “Only The Broken Hearts (Make You Beautiful)”. A beautiful arrangement as well, and like so many times that night I have goosebumps, it’s just beautiful! And obviously I’m not the only one enjoying it, the audience is quite enthusiastic, despite the fact that they have to sit during the entire show. This show is filled with 16 songs and 2 encores, taking us through a journey from beginning until now. There is “Full Moon”, “Letter To Dana”, “I Have A Right” or “Black Sheep”. Some arrangements are slow ballads, others remind me a bit of Steve’N’Seagulls, another one of the “Flight of the Bumblebees”. Luckily my beloved “Tallulah” isn’t missing either. Tony asks who likes to sing Karaoke. Obviously some bar had a sign “No Tallulah”, if I got that correctly.

The show is very energetic despite the slow tunes, and contains lots of jokes and laughs as well. Before “Paid In Full”, Tony asks from other band members, what were their first cars, for example. And during the song, things go wild: At the text passage “Turn another cheek” he claps his behind, and has eye contact to Henrik at the keyboard, and – starts giggling. As hard as he tries to keep it together, that’s it! He bursts out laughing and can’t continue singing. And everyone is laughing along. Henrik says “Maybe you should keep your dramaturgy down a bit” – more laughs. Ok, back to business, the guys try to continue, with the same result: clap on the behind, laughs! “Are you laughing with us, or at us?” Henrik asks. So for the third attempt Tony walks all the way to the end of the stage in a dark corner, to avoid eye contact, and even some giggles are to be heard, the show continues. But by now the crowd is wild. After “Flag In The Ground” the band leaves the stage, and the crowd won’t stop clapping, until the band comes back for two more songs, “Victoria’s Secret” as a short version with only one guitar, and after “Wolves Die Young” they say thank you and good bye.

I have never seen Sellosali boiling like that, thank you for this wonderful acoustic concert, Sonata Arctia!

And: I really hope, you will release a recording of these concerts as an album. Maybe this one? #turnanothercheek 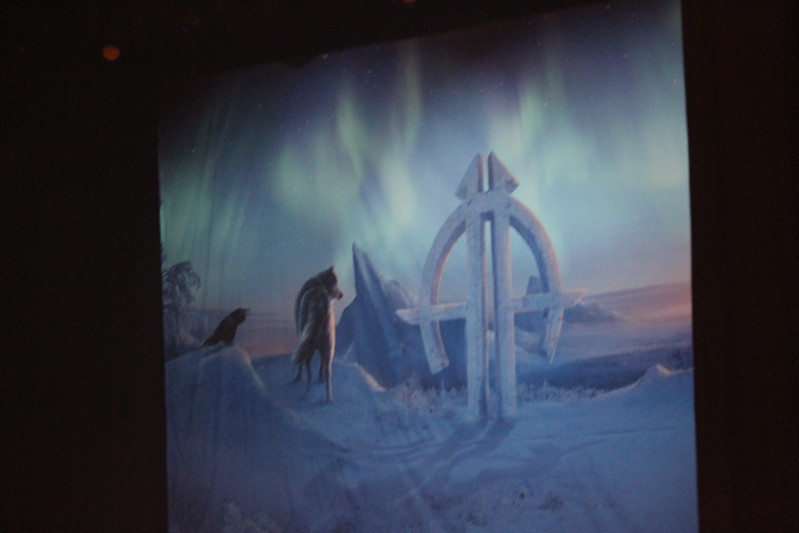