On the “Last Tour” Sabaton made their stronghold at Oberhausen, this time in a major venue, the Koenig-Pilsener-hall, and the courage was rewarded when estimated 6000 enthusiastic spectators celebrated the Swedes, who also offered a strong opening program with Twilight Force and Accept.

Twilight Force, who come from the Swedish region Falun, just like Sabaton, opened the evening with Powermetal, but this time they remained only a marginal note with flowing hair and long ears: their stage performance style is strongly influenced by the fabulous spirits of the Nordic forests.

The second band of the evening was Accept, and close to their native city (Solingen) they showed how easily they still can frenzy an audience.

The gig opened with “Stampede” from the last album “Blind Rage”, followed by “Stalingrad”, and quickly the classic part started: “London Leatherboys”, “Princess of the Dawn”, “Metal Heart”, “Fast as a shark” and “Balls to the wall” brought back the 80s, complemented by the ” Final Journey “and” Titanic Terror”, which had been released during the last creative period

The five had a lot of fun on stage including a crystal clear sound, a lot of fog and all of the crowd singing along, although the shortened set had the advantage of avoiding unnecessary lengths.

After ten songs and an hour of playing time, those seasoned masters left the stage with a good feeling to have won over some new fans.

At half past ten, the off-screen version of “In the army now” emerged from the boxes, and accompanied by the riff of “Ghost Divison” the headliner of the evening, Sabaton, appeared on stage.

As usual the band wore camouflage outfits, the guitarplayers long-haired, only singer Joakim Broden with short hair and sunglasses, the drumkit in the background of the stage mounted on a tank.

The pyrotechnicians did a good job, supported by the booming bass, those explosions and flashes gave the illusion of a real battlefield. In the back of the stage hung a video wall for visuals fitting to the songs, Welcome to the Multimedia world!

With the next song “Sparta” from the current album “The Last Stand” the stage became filled with antique Greek soldiers, yet during “Blood of Bannockburn” no Scots appeared.

After the first announcement, where Joakim introduced Tommy Johannsson who currently replaced Thorbjörn Englund on guitar, followed the first drinking break, and Tommy was forced to empty the first beer can of the evening on stage, after the chants “Another Beer” from the audience which are usual at Sabaton gigs in Germany.

Next followed the cracking “Swedish Pagans” and “Carolus Rex” and finally the initial sound problems were gone. The title track of the new album and “Far from the fame” of “Heroes” led to the acoustic part, and a few wagging flames on the edge of the stage accompanied Tommy Johannsson on the keyboard with an unplugged version of “The final solution”

After this short time of contemplation, the guitars shrieked again, and with “Night witches” and the “Winged Hussars” the Swedes picked up speed once more. The chorus of the next title – due to another beer drinking competition won by Tommy Johansson – was changed to “Noch ein Bier” (Another beer) instead of “God with us”, and why not, the venue is named after a brewery.

“Dominion Maris Baltici”, “The Lion From the North,” “Diary of an Unknown Soldier,” “The Lost Battalion” and “Union” slowly drove the evening to an end and “Primo Victoria”, “Shiroyama” and “To hell and back” reminded us how the year began: with fireworks (yet here in a reduced version).

It was a successful event, Sabaton has taken the step into the first league of metal and played a convincing concert, despite of a bumpy start. In the bundle with Accept it will be difficult to top this package in the remaining 358 days of this year. 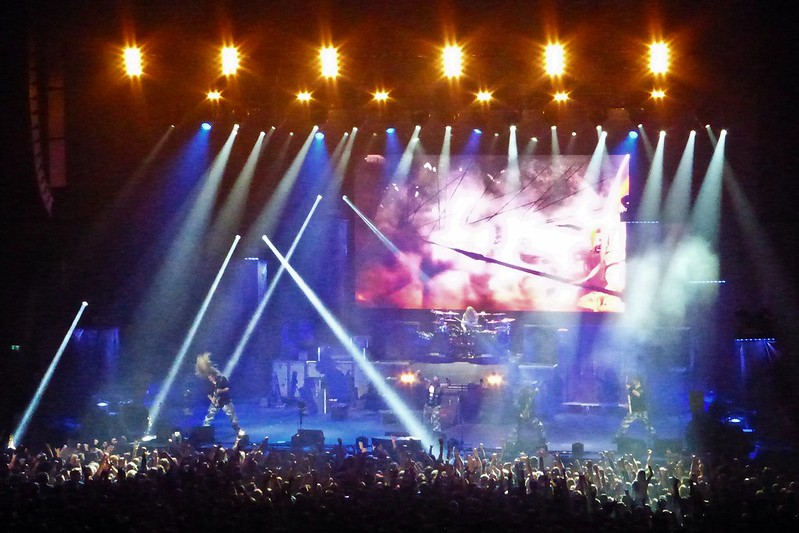