Interactive photo gallery at the end of the text
I think next year, if I have the opportunity, I will already travel on Thursday to Gelsenkirchen. Despite a supposedly timely departure, several jams and a pesky Ruhr rush hour traffic make me arrive much later than planned at the RHF, and I get to hear only the last three songs of Apokalyptische Reiter, and unfortunately I miss Nocturnal and Midnight entirely. Damn!

However, Triptykon should be a more than worthy headliner for the rough-sound Friday. The intro “Crucifixus” precedes “Black Snow” from the new album. As expected, this druing this cumbersome, bulky Art Metal not too much happened first in front of the stage. Only the third title, the probably best known “Circle of the Tyrants” stirs the audience a little more. Anyway, the security gets some work with the first crowdsurfer. After that Tom G. Warrior welcomes the audience with a dedication – but not to the recently deceased artist HR Giger, as some chanting from the audience suggested, but the recently resigned chief editor Götz Kühnemund. Something called chutzpah! With “Tree of Souls Suffocating” is followed by another pitch-black chunks from Melana Chasmata album and with “Abyss within my Soul”, a title from the 2010 album Epaistera Daimones. With immortal black metallic exploits “Visions of Mortality”, “The Usurper” and the final Hellhammer sledgehammer “Messiah”, the first festival day comes to an end. Well, o.k. – it is shifted to the party tent.

In sweltering midday heat the – I think – Swedish guys Dead Lord , something like a Thin Lizzy Tribute band also playing their own titles, gather some audience in front of the stage. And no wonder – they are simply good, live up to the original and with titles such as “Hank”, “No Prayers can help you” and “Onkalo” they show that in 2014 you can still produce music that easily fits to any “China Town”, or “Johnny the Fox”.

Screamer, also from Sweden, have had the problem that their singer quit only a few months before the festival season. Well, the replacement is somewhat passable, the voice wobbles every now and then, but the instrumental section makes it quite up for it. Heavy Heavy Metal with strong NWOBHM edge, you can not do anything wrong with.

The Icelandic Heathen Bastards Sólstafir are already longingly expected, maybe because people hoped for some cooling off by those Northern men. Something seems to be wrong with the amplifiers and Sólstafir start with a small delay, but then there´s finest post-Metal in the air. Especially Fjara is celebrated accordingly. However, I would have expected some more people at the Sólstafir show, thinking of last year´s Party tent stage at the Summer Breeze. After that there´s the much more traditional Pretty Maids sound.

Obituary deliver a tight performance with a set list which leaves nothing to be desired. Also seen for the first time, headbangers en masse. Singer John Tardy moves like an angry caged lion across the stage, continuously from one end to the other, and lets his not-quite-so-long hair swirl at every opportunity, like a man possessed, and Trevor Peres still can stare so angrily through his hair that you almost drop dead. The set list, as announced, is limited to the first four albums, and tracks need not to be mentioned here – the usual suspects are probably well-known.

Sacred Reich is easily predictable and deliver once again a fantastic live show, also because a cheerful Phil Rind keeps his inter interaction with the audience, praising the performances by Obituary and Solstafir right after the first two tracks “Independent” and “One Nation” before continuing with “Love …. Hate” from the American Way album. Lots of applause – and rightly so! During the following “Ignorance” the crowdsurfers density is relatively high, and Phil is be carried away announcing that he would like to see some tits. Did he? Unfortunately I cannot confirm that from my view point. What follows are the usual classics “State of Emergency” Death Squad “, the highlight of” Who´s to blame “the text of which is naturally sung along by almost every present metalhead. Phil Rind seems seriously moved by so much enthusiasm. “Ain´t Talkin bout Love” is carried over to a “Paranoid” cover, and the show comes unfortunately to an early end. For me, this was the winner of the day!

Carcass decided in 2008 after a couple of we-try-let´s-see-what-happens gigs to risk a comeback, which was probably one of the best decisions ever made ​​in the Death Metal cosmos. The appearance of this English Grind / Death institution rounds up the Saturday nicely. This virtuosity paired with maximum aggression and intelligent lyrics cannot easily be found in today´s Metal very often, unfortunately. The Carcass show mixes musical quotes, unusual title combinations and Jeff Walker´s very own very British humor. The focus is expected to be on the current “Surgical Steel” album. But the classics like “Buried Dreams”, “No Love Lost” and “Heartwork” from the eponymous album and “Incarnated Solvent Abuse” and “Coropral Jigsore Quandry” from Necrotism About get the audience worked up in this already hot day even more.

On hallowed Sunday we missed the church, but see Orphaned Land. Well, the last three songs of them. Not quite my cup of tea, but many take note of this band from the Holy Land, where once again a not so holy war is raging, only because of their exotic status.

Insomnium are not such a new band from Finland, but for some reason I have overlooked them in the past. Anyway, I listened to their material only one or two weeks before the RHF, and at the festival this Melodic Death Metal certainly works splendidly. Insomnium had cracked the top 5 section of German charts with their new album “Shadows of the Dying Sun”. The melancholy and of course the current album material gets many headbangers going, others provide not more than a benevolent nod. You do not want to overdo it, yes. Only the somewhat over-ambitious posing does somehow not quite fit in.

The trademark of Space-Rock is next, Monster Magnet. A gorgeous DOMICILED Dave Wyndorf celebrates a sweaty appearance under a merciless scorching sun and he should be careful wearing such a heavy black leather jacket, because under the sunglasses you can notice that his long-lived rock and roll lifestyle has left its mark. Anyway – he surely deserves the title of the coolest rocker present in any case, only for bringing the groove of “Superjudge”, “Dopes to Infinity”, “Power Trip” and of course the immortal “Space Lord” to the ears of the audience.

Annihilator stand out for me, even though I don´t know the publications of Jeff Waters all too well. It was here clearly the joy of playing and the agility of this Canadian, grinning for the entire appearance, and playing guitar solos with an ease, which is second to none. The song selection is a Best of, together with some songs of not that well known albums, which also is again very likeable. In any case, the difference between listening to Annihilator on CD and live is much larger than with other bands. For example, some Annihilator Albums have left me quite cold in the past, but live it´s really a fun thing, and you can realize that fact quite well due to the crowdsurfer density.
Tesla leave me cold, now as well as back then.

Since Megadeth had canceled quite shortly before the festival because of a death in the family of bassist Dave Ellefson, naturally finding an equivalent replacement at short notice presented a huge problem. Quite quickly the organizers came up with Testament. Counting the time pressure , yes, OK, equivalent replacement? Certainly not, and unfortunately this performance confirmed it. It was by no means the setlist with old and new smashers such as “Rise up”, “Native Blood”, “Into the Pit”, “Practice what you preach”, “Over the Wall” and “Disciples of the Watch“, to name only a few. But with this performance somehow nothing really worked. The sound was not even the biggest annoyance – and for a band with such musicians! A Steve DiGiorgio, a Alex Skolnick! My Dear – a Gene Hoglan! Hence you should expect a highly virtuoso Thrash attack. But what was delivered here deserves neither the name Testament, nor the title headliner. Too loud and triggered drums (Gene Hoglan, triggered drums?), practically no bass, two guitars on stage of which only one is present to some extent, and a too loud singing by the chief. Well – you have not had much time to rehearse, but hey – Testament has been existing for how long? Well, that was nothing!

Otherwise, once again, a smooth festival! Although on Friday I had the impression that the resignation of some longtime editors, including the chief editor, had affected the crew – did they leave, or were they forced to leave – of course, there was much speculation. Nothing of such a tension was to be felt on Saturday any more, and maybe that tension existed only in my imagination. Once again it was a lot of fun! and I probably got me the already imagined. It was a feast to me again. 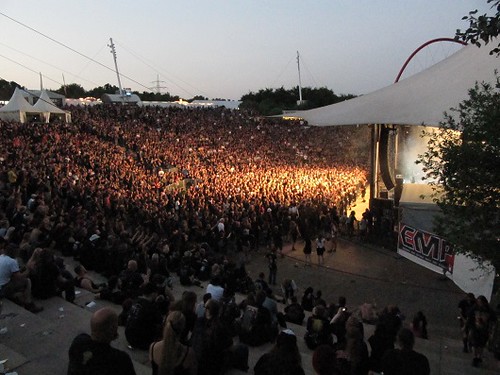 Jim Kroft in Cologne: It’s not about politics, it’s about humanity!