How long a year could be when looking forward to ByH, and what a pity when you can only arrive by Friday, but Grave Digger, Stormwarrior and Bullett are not bands that hardly ever play live. Otherwise the billing this year is promising, even when some whine about Twisted Sister – again?!? I´m anxious to see Snider & Co. The weather doesn´t appear to be great, 70% possibility of rain and apocalypse, but the 19th festival edition remained mainly in the dry zone.
interactive photo gallery at the bottom
Friday
I can only watch the final songs of Warlord when setting up the tent, and it seems I miss one of this day´s highlights. “Deliver us from evil” and “70.000 Sorrows” still sound pretty awesome from a distance, Tsamis & Co are still at top.

For Kissin´ Dynamite it´s a home match. Those Suabian Steelheadz inspire the audience right from the start, frolicing with “Sex is War”, “She´s a Killer” and “I will be King”. The latter features singer Hannes – who enjoys bantering with the audience – in Freddie Mercury attire (red cape).

Riot V are the new Riot! The only difference – no more band members from the original line-up. Mark Reale, who passed away 2 years ago, will be missed, with Nick Lee they found a good guitarist, and singer Todd Hall does a great job. After a few songs the audience is under his spell, with songs like “Johnny`s Back”, “Flight of the Warrior”, “Swords and Tequlia” and “Thundersteel”.

I have been looing forward to Exodus indeed! Steve “Zetro” Souza is back, yet I have no idea why Rob Dukes was fired, the band never announced the reasons. I have never seen a bad Exodus gig, neither with Zetro nor with Dukes. Still I heard that this was not one of his best shows, anyway, after this long hiatus it was more than OK – for me it was THE highlight of this day, with a cool Gary Holt (nowadays mainly buzy with Slayer), a tightly drummingTom Hunting and a grandiose Lee Altus. The setlist contained songs of the 2004 “Tempo of the Damned” and of the first 3 albums. A pity not to hear anything from Rob Dukes era that had something to offer too.

Michael Schenker Group has not impressed me until now, but this ex-Scorpions /UFO guitarist and former guitar child prodigy plays now with ex-Scorpions members Francis Buchholz and Herman Rarebell and former Rainbow singer Doogie White, which raises my interest, therefore I go to enjoy the opener “Doctor, Doctor” and Scorpions songs like “Lovedrive”, “Another Piece” and “Rock you like a Hurricane”. The following MSG track “Assault Attack” including excessive soloing rather inspires me to walk to the bar.
The next act is – according to his own statements – the biggest Rockstar of this year´s ByH, Sebastian Bach, who also makes extensive use of the phrase “Fuck”. Not worth to mention more, please don´t book him again.

Axel Rudi Pell celebrates the 25th anniversary of his solo band and the 30th anniversary of his first Steeler release. Therefore the ARP show lasts a bit longer than usual, starting with the Steeler Song “Call her Princess”, covering the Steeler and ARP history with guest musicians like Jeff Scott Soto and Rob Rock, only the guest host named Harry seemed a bit out of place. “Fool, Fool”, “Burning Chains”, the Neil Young Cover “Hey hey, my my” and “Rock the Nation” end the main part, but there is another special, introduced by a drumming battle between Bobby Rondinelli and Vinnie Appice (ex-Black Sabbath). Yet after 90min Pell some audience seems to have enough and the Messeplatz is slowly emptying. What´s still coming is an encore part where Pretty Maids singer Ronnie Atkins covers Deep Purple´s “Black Night”, ZZTop´s “Tush”, then “Mistreated”, then Graham Bonnet sings a grandiose “Since you´ve been gone”, before “Long live Rock´n Roll” and “Smoke on the Water” end the show. Whoever left earlier, those peoplemissed something indeed .

Saturday
At such an early morning, 11.45 h, Hirax begin the program of this day. I con´t quite understand why I attend the show, r Katon W. DePena is a likeable Extreme Metalhead, but this gig lacking memorable hits is not really kicking me out of my socks.

With Obituary the first raindrops fall, and whoever isn´t a die hard fan runs for cover. They offer basically the same set list they played at the Rock Hard Festival, yet a lot less energetic.Trevor Peres even yawns on stage. Nevertheless the audience welcomes “The End Complete”, “Slowly we rot”, “Immortal Visions”, “Chopped in Half” and “Inked in Blood” with intense head banging. A tight show, but there could have been more action on stage.

Although I loved Helloween with Kiske, nowadays I cannot stand that guy live on stage (reading his interviews is cool, though). Therefore I could not stand much of Unisonic and enjoyed “March of time” and “I want out” from a distance.

Anthrax is always a blast although Scott Ian has become less likable in recent years. They kick off with “Among the Living”, “Caught in a Mosh” and “Got the Time” and naturally the audience goes nuts. Ex-interim and once-again front man Joey Belladonna has a lot of fun, runs around on stage like a mad man, throws beer cups into the audience yet hits a photographer, to whom he apologizes extensively. “Indians” is another highlight, causing as much moshing as “Madhouse”, “I am the Law” and the final “Antisocial”. A band always nice to watch.

Inside the hall Atlantean Kodex deliver in my opinion the best ByH 2014 show. Just the opener “Enthroned in Clouds and Fire” is intense. NO wonder that the hall is full right from the start and will be filling up even more. Everybody raises their fists in the air, almost every word is sung along loudly. Goosebumps right from the start – this is magic! “Sol Invictus” induces more headbanging, “Pilgrim” from the first “The golden Bough”album and “From Shores Forsaken” follow before the massive “Heresiarch” ertönt. Atlantean Kodex are celebrated like heroes, and who makes music like this definitely deserves it. Just writing those lines now I´m having another goosebump attack.

What´s the matter with Dee Snider? How can you be this fit in this age, running around on stage all the time? Twisted Sister have always been a guarantee for professional gigs and behaviour, but with this show Twisted Sister set a mark in history. Dee Snider sings as well as in his best times and entertains the masses with his big mouth – well, as an entertainer should do. One hit follows another, “Stay Hungry”, “You can´t stop Rock´n Roll”, “We´re not gonna take it”, Motörhead´s “Born to raise hell”, “The Price” and naturally “I wanna rock”, basically the whole Stay Hungry album of 1984. I would have enjoyed to hear more of “Under the Blade” too, but you cannot have everything. What a great finale to a fantastic festival.

All available thumbs up for such a great festival, and many thanks to the team around Horst E. Franz and the mostly friendly Security. Higher prices were less enjoyable, but as long beer costs less than 1€/100ml, it´s OK. The food, however, was too expensive in general. We are looking forward to the 20th anniversary show next year which – as Horst announces – will last 3 day and will feature e.g. W.A.S.P., Y&T, Pretty Maids, Primordial and more… 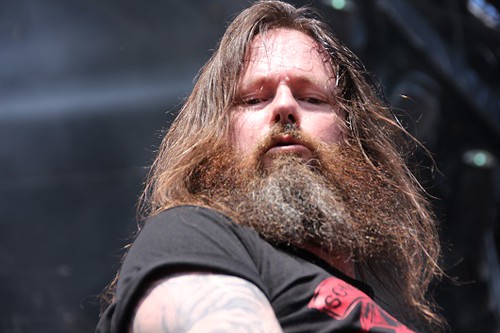