I´ve discovered Bang your Head Festival pretty late, because when there was some interesting billing, I could not attend due to financial or professional issues, and when I would have had time, the billing wasn´t interesting enough. This is why this year it´s only my second ByH, but well, better late than never. The weather is great when I get there, and it should stay this way for the whole weekend.

Interactive gallery at the end of the text

My first band on Thursday are Maiden United, who do acoustic covers of Iron Maiden songs. The band featuring Threshold singer Damian Wilson, who had impressed me already at Rock Hard Festival and at Metalfest with his main band, starts with the “Seven deadly Sins…” intro from the “Seventh Son” album, but other than the expected “Moonchild” they continue with “Only the good die young”. Interesting choice! It continues with “22 Acacia Avenue”, which is played flawlessly but the acoustic version is way too much stretched out, and “2 Minutes to Midnight” which I hardly recognize in this version. “Revelations” is one of my Iron Maiden faves, but unfortunately Maiden United fiddle around with it way too much. I have to say that Damian Wilson is an awsome singer and the Dutch musicians know their trade well, but I don´t enjoy their „fiddling around“ at all. Nevertheless the venue is full and the major part of the audience is singing along.

A quick changeover, and Tokyo Blade are the first highlight of the evening. You can feel the joy to perform from this originally British, now international band – I even lost track who is still from the original line-up. Tokyo Blade deliver a great show with a good sound, still the average age of present fans suggest that they have been following this band since the 80s. However, only the front rows are honoring this energetic show with constant headbanging.

The following never-ending change over / soundcheck causes some distress, so that some people in the audience even boo when Vicious Rumors finally enter the stage. What is about to follow has everybody forget their frustration quickly, I have not expected such a tight show that starts with “Digital Dictator”. Hit after hit, “The Pest”, “Hellraiser”, “Down to the Temple”, “Mastermind” and “Soldiers of the Night” has the crowd go nuts. The band – who seems to change the line up constantly – also features Keven Albert, son of the deceased Carl Albert, and this show will surely be remembered for a long time. The final songs are sung by the current singer Brian Allen together with Keven Albert.

I have been looking forward to Candlemass , as I don´t attend Wacken this year and Leif Edling seems to go through with his threat to shut the band down. So this might be the last Candlemass show for me (sob). Rob Lowe had to leave because of his alcohol problem right after the recording of the recent album “Psalms for the dead”, since then Mats Leven, singer of the Leif Edling project “Abstrakt Algebra”, has taken over. Candlemass start with “Prophet”, the opener of the recent album, and the audience is freaking out.

You see fists in the air and people dancing, all who are singing along seem to realize that they will never see this band again. I cannot understand why they play “Bewitched”, the video track of the “Nightfall” album, then “Dark Reflections” from “Tales of Creation” receives many cheers. What a pity that the sound is not quite perfect. Instead of the new “Waterwitch” they could have played “Hammer of Doom” or “If I ever die”. The doom celebration continues with “Emperor of the Void” and “Under the Oak” which mystify the audience. Mats Leven seems to stick out because of his hippie attire, but he fits well into the band, also his vocal performance. More classics are played “At the Gallows End”, “Darkness in Paradise”, two more from the recent album and the encores “Crystal Ball” and “Solitude”. What a pity that “Samarithan” was not played and “Mirror, Mirror” , and and and. Tearing up yet cheered up by such a great gig at the same time, I decide to have a beer on that!

On Friday my first band is Entombed who gather quite a big crowd that is headbanging from the first to the last note. The sound is good and with songs like “Out of Hand”, “Revel in Flesh”, “Stranger Aeons”, “Eyemaster” and naturally “Left hand Path” you cannot do anything wrong. However, L.G. Petrov has had better vocal days, but well – this has also been some time ago. The Swedish DM works well even with 30°C.

Scandinavian sounds continue with Pretty Maids yet a bit softened up – which cannot be said of the temperature. The Danes with front man Ronnie Atkins start their set with the opener of their new album “Motherland”, “Mother of all Lies”. They are posing like hell, and although the maids have not been on top of the game recently – they are still awesome.

Saxon were granted 2h at Bang your Head and those Lords of British Heavy Metal fill that time easily. “Sacrifice”, the title track of their new album, starts the set and classics like “Power and the Glory”, “Heavy Metal Thunder” and “Motorcycle Man” heats up the audience, even crowdsurfers can be spotted. Saxon are a guarantee for good shows, although I have not seen any sensational show in recent years – but you will receive solid quality, like the awesome “Solid Ball of Rock”. Biff is constantly headbanging, despite his age – respect. In between there is the redundant drum solo, it seems some people need a break. “…and the Bands played on” is my personal Saxon fave, and the sequence of hits hints at the fact that the show finale is near. “747” features the eagle (great moment) and “Wheels of Steel” ends the set. “Crusader” is the first encore, and the audience sings along with the classics “Strong Arm of the Law”, “Denim and Leather” and “Princess of the Night”. Saxon is simply the Volkswagen of Heavy Metal.

On Saturday I listen to Angelwitch from the parking area, and later I heard that i might not have missed a lot. Sanctuary are my first band of the day, Warrel Dane & Co start with “Taste Revenge” and keep the audience in good mood with “Die for my Sins”, “The Mirror Black”, “Battle Angels” and “Future Tense”. Yet Warrel Dane seems a bit ill, he is incredibly thin.

Although At the Gates deliver a flawless set – good sound and song choices, Tompa Lindberg´s entertaining statements – the front rows grow thinner after a few songs. I wonder why. The band focuses on the Slaughter of the Soul album and open a strong set with its title track, then “Terminal Spirit Disease” and “Under a serpent Sun” – good that some people left, so there is more space for headbangers. The Slayer cover “Captor of Sin” is dedicated to Jeff Hannemann, and Mr. Lindberg explains that without Jeff, or Slayer, there would have been neither Death Metal nor At the Gates. “Windows”, “Blinded by Fear”, “Nausea” and “Kingdom gone” follow after that – and I think it was a great gig!

The awesome billing this year has some acts with headliner status appear in the afternoon, for example Iced Earth, who take off with “Dystopia”. The guys behind Boss Jon Schaffer focus on their recent album and the 96 Opus “The Dark Saga”. Which is awesome as those CDs feature hit after hit which is naturally well received by the audience. Despite the energy I seem to perceive a certain tour fatigue or routine, no wonder as Iced Earth have performed a festival marathon this summer. “Pure Evil” and “A question of heaven” are the show highlights in my opinion. “Anthem” and a fierce “Boiling Point” the audience is driven to new moshing records, before soothed with “Watching over me”. “The Hunter” as encore ends a brilliant set, and I am looking forward to the new Iced Earth CD due this year.

Udo Dirkschneider, anybody? Yes I know, it´s a sacrilege, but Accept have this true character Mark Tornillo in the line up who refined the last two CDs “Blood of Nations” and “Stalingrad”. Just remember what´s going on with Udo Dirkschneider right now. Well. “Hung, Drawn and Quartered” and “Hellfire” from the recent album are an awesome opening, and the band is celebrated as if they played major classics. “Restless and Wild” still manages to get spirits even higher, and Wolf Hoffman seems to oversee the gig as a gentle grinning giant. In between there is the guitar – bass duel / solo by Hoffman and Baltes and singer Tornillo seems to be baffled by the audience reactions. Well deserved. “Princess of the Dawn” and a fantastic “Fast as a shark” ends the official part, before the band returns to the wild audience with “Metal Heart”, Teutonic Terror” and of course “Balls to the Wall”. Fantastic show, fantastic audience. 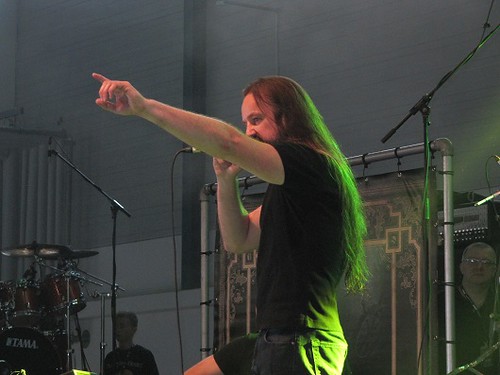 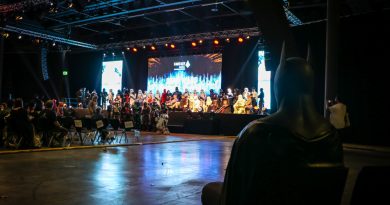