Although in 2010 it should have been the last Avantasia Tour, Mastermind Tobias Sammet has put it all together once again and released another musical masterpiece with many new guest musicians: „The Mystery of Time“ topped the charts in many countries and in Germany it even reached #2. The tour seems to be a huge success even now. The opening in Belgium was a big success, and both shows in Pratteln were sold out. It seems that Sammet has a good hand with everything, Avantasia offer a great and unforgettable sow. STALKER followed both shows in Switzerland and the one in German Oberhausen, the second last of this tour´s first part.
Interactive photo gallery at the bottom

13.04.2013 Pratteln Show 1
You could not have chosen a better date, Avantasia on a Saturday means sold out show and many excted fans. They had to wait a bit, as the show should have started at 8 but began about ¾ h later, because of technical problems, so it seems. Finally the lights went out and with „Spectres“ Avantasia entered the stage: a Olli Hartmann, Sasha Paeth, Felix Bohnke, Miro Rodenberg and Bassist André Neygenfind plus Thomas Rettke and the only lady Amanda Somerville, who were taking on the back vocals. The second song „Invoke the Machine“ featured – besides Sammet – the first guest vocalist, Ronnie Atkins from Pretty Maids. Unfortunately his microphone did not work first. His unique voice covered the part usually sung by Jorn Lande, who could not attend this time. Unfortunately it turned out that he was to be missed a lot in several songs, you simply wanted to hear his voice. Only Ronnie managed to stop this feeling of disappointment. The first evening, however, it was usually Mr. Big´s Eric Martin, whose voice was not quite fitting to such kind of Metal Songs – it rather goes with softerHard Rock tunes of Mr. Big. Naturally Thomas and Amanda had a major part, where once again sound problems occurred. Amanda is simply great, she is dancing all the time and her smile is like a beam of sunshine right into your heart – and nothing to complain about her voice either. Oh, and there´s another man who was so convincing with a voice range of 4-5 octaves – Michael Kiske. Who else needs to be mentioned? This little guy with this high voice, who is known to everybody – Tobias Sammet, who orchestrated the program of the first evening with wit and charme.

14.04.2013 Pratteln Show 2
Also the second show had to be watched, and here the vocal parts were switched a bit. Michael Kiske´s show involved e.g. sitting down on stage in front of the fans during the long instrumental parts, he even „took a nap“ at some point. It´s rare to see this reserved German in such crazy mood and close contact to the fans. Kiske and Sammet did some bickering, at some point Mike stated he was frustrated that initially his microphone had not worked, and Sammet replied that it was full intention, because he wanted to look better. When they also made jokes about „a 3h show is way too much, too tiring for the audience, we should have cut it down to 1h“, the audience reacted with loud booing. Actually those two could go on a club tour as comedy duo. The show was wrapped up with „Avantasia“ and „Sign of the cross“, which united all musicians on stage. Finally Tobi announced that he does not claim this to be the last Avantasia show ever, it might be possible they come back in 5-6 years with another tour, which would definitely stop over at Z7 again. Well, so let´s be looking forward to that! (SM)

25.04.2013 Oberhausen, Turbinenhalle
Avantasia do not only rock Switzerland, they also rock Germany (at least Oberhausen). I never saw the Turbinenhalle as full as tonight. The band should be very happy about this gigantic crowd, the audience was maybe less pleased. Many people – especially the small ones – have a real problem to get a clear view to the stage. It also seems the pricing of the merchandise has been influenced by the success. A plain shirt costs 25€ what is normal for American or Britain megasellers, but not for German bands.
But back to the music: When Avantasia enter the stage at 20:30 h, the venue has already turned into a sauna. Due to the warm weather today, the venue had heated up and later even more due to the crowd. And, as Michael Kiske says multiple times this evening, the oxygen is running really low.
The band doesn`t care about these conditions and plays first several songs of the new album, which is really great. The show is supported by a great light show, with only one disadvantage, low lights sometimes blind the audience. But Avantasia try to fulfill all needs of their fans. The play a gigantic 25 track setlist (!), which covers every album properly (the focus is of course on the latest). In addtion, there are the obligatory guest singers: Ronnie Atkins (Pretty Maids), Eric Martins (Mr. Big), Michael Kiske (Unisonic) and Bob Catley (Magnum), who all are doing a great job tonight. Only Eric exaggerates his jokes with the audience a little bit, especially because most people do not understand them. All in all, the performance of both, band and vocalists, is really great. By the way: Amanda Sommerville (backing vocals) bangs more the all of the males on stage together. Respect!

The audience – maybe due to the conditions or whatever – needs a real long time to wake up. It takes until `Lost in Space`, which comes quite at the end, to make the audience sing along. But they keep on doing so from this song and so some atmosphere is added to this show. And finally there is more motion in the crowd, for example two boneheads in front of me seem to have smoked from gumtrees, because they bend their bodies in all directions. And there is also a middle aged woman who dares to raise her arms.
The encores ´The seven angels´, ´Avantasia´ and ´Sign of the Cross´ are a really great finish. After more than 3 hours of great music, the crowd floods out of the venue into the temperate night. (TP)

Summing up, Avantasia always offer a great show to the audience, and it would be a pity to have this project put on ice. 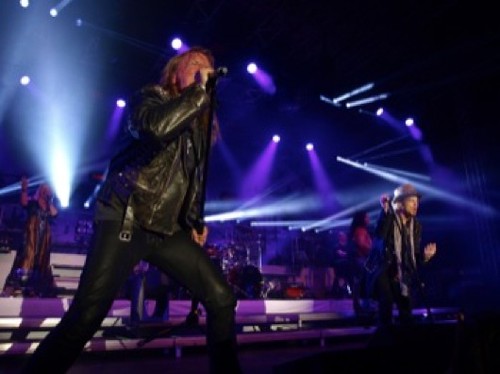