The traditional and legendary New Year´s Eve concert of HIM at Tavastia, later named Helldone-Festival, has returned in 2012 after a break as 4-day event with HIM and The Skreppers as support, plus different opening acts. The first evening it was Face of God, on Dec 30 it will be Jericho Fuzz and on 31st Sleep Of Monsters who enter the stage first. Another tradition was continued, the tickets were sold out in no time, and many fans had travelled far to this event, from the USA or Japan or even New Zealand…

Although I arrived shortly before the first band was due, there was no rush, no queues anywhere, an ample choice of seats, only a few people in the club, and most of them had gathered at the stage to secure the best spots in the front rows.

Final Assault
The band name says it all… the Finns see themselves as 80s Thrash Metal act, I´d rather put them into the category Hardcore-Punk with Metal influences. The guys released a rough sound attack with the material of their debut Dead By Dawn (“Something Outside”), later they played some more relaxed grooves, taking bows to Metallica or Deep Purple.

The club filled up during the show, and in the back you could see (male) fans who approvingly head-banged along, the feedback from the (mainly female) front rows seemed to be a different one. “Only 2 more songs, then we´re out”, was a comforting message from the hyper-active front man Jänö – with “You shall die of your own evil creation” the band ended the show even a few minutes before schedule. Well, I don´t think it was that bad, the guys definitely don´t need to feel like the title of their latest 7inch Vinyl album, “Kings of Shame” …

The neighbour club Semifinal – basically the cellar of Tavastia – was ruled by DJ Jyrki , The 69 Eyes front man. According to experience from previous years, I went there quickly before Semifinal fills up, just to reach the stage and take a few photos. Jyrki focused on classics, like Johnny Cash, Led Zeppelin and later rocked the dance crowd with Finnish Metal classics (e.g. Amorphis, Sentenced).

The Skreppers
appealed much more to the crowd, and sure – who can resist this Party-Rockabilly garnished with bizarre lyrics, performed by even more bizarre band members… Another reason might be that Tavastia was pretty full already and many people knew this band and even their new album “Sherwood Gays” and songs like Gay City Roller. Frontmann Special K., this time in a rather harmless outfit, impressed with his moves (you gotta learn something here, PSY) and later the legendary latex overall was revealed. K. alias Hiili Hiilesmaa also told us why he has a special relationship with Tavastia club – his parents had met each other here.

The show was rounded up with “My girlfriend is a prostitute” and an extensive instrumental part, to which a lady began to undress herself. Well, it mirrors the humour of this band that underneath her corselet she revealed another corselet… and before there was too much naked skin, this part of the show ended, too.

More photos here
HIM
Finnish media had reported about the stumbling start of Helldone festival, where Ville not only messed up vocally but also in terms of social interaction, therefore I was anxious what´s going to be the deal this night. No, this time Ville appeared fit and friendly, clean shaven and dressed in a style we all know. And so thin he could hide behind the microphone stick. A new song, “Strange Worlds” (you can watch the video at heartagram.com) opened the show – and I could not hear anything of Ville then, I rather heard the fan crowd singing along. And didn´t see anything unusual by then. Also when the microphone screeched during Sweet 666 … The band had fun on stage, obviously, and Ville didn´t make too much contact with the crowd (which I also didn´t find so unusual). The show seemed fine in every aspect.

Then they played another new song, I will be the end of you, where Ville had problems to find the vocal line and the voice sounded weak (especially in higher registers) or could not be heard at all. Then I understood the reasons of the microphone problem – it was cranked up to the max. Gone with the sin however – where Ville snatched a guitar and the lights were dimmed down to create a campfire feeling – became one of the show highlights due to the atmosphere. Yet the following Wicked Game should become a turning point – when he managed to reach some higher note, it sounded very thin, or there was no sound at all. It seemed he hardly dared to get a high tone out – and the legendary “nobodyyyyyy…. ” turned into a half-spoken / half-whispered reference.

Unfortunately, a HIM show stands and falls with Ville´s performance – even when Mige, Linde, Gas and Burton play their asses off – which they did. The problems continued during Sacrament, and Funeral of Hearts or Join Me was sung partly by the audience for a good reason; also Mige and Linde took over more of the vocal tasks. Old hits like It´s All Tears sounded better as originally settled in the lower registers, which was also the case for When Love And Death Embrace.

Unexpectedly the band came back for an encore, a mainly instrumental Sleepwalking Past Hope which once again underlined the achievement of the band.

For me it was painful to listen how an artist struggles to deliver a performance everybody expects – and it simply doesn´t work. I am familiar with cracking and disappearing voice myself – it happens every time I catch the flue. Therefore I suspect a similar cause here…
When leaving the club I overheard a fan stating that Ville was even more drunk this night than the night before. Seems totally unfair, in my experience drunk people lose control not only over the high registers of their voices… Unfortunately there´s no official band statement when writing this report, therefore I don´t know if my suspicion of “the flu” is correct – best wishes for tonight´s show and the Helldone-gig on New Year´s Eve!

Setlist 29.12.2012:
Strange World
Right Here in My Arms
Wings of a Butterfly
Heartkiller
The Kiss of Dawn
Your Sweet 666
I Will Be the End of You
Gone With the Sin
Wicked Game
The Sacrament
The Funeral of Hearts
It´s All Tears
Soul on Fire
Buried Alive by Love
Join Me in Death
When Love and Death Embrace
Encore: Sleepwalking Past Hope 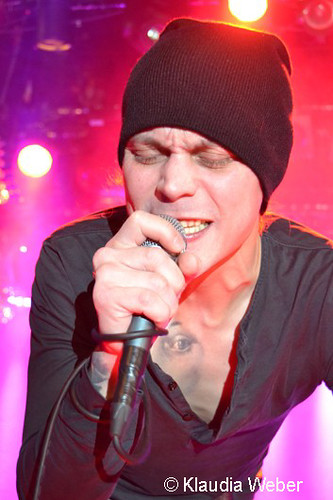