The Air Guitar World Championships 2011 was a celebration of the prettier sex, when the international air guitar scene witnessed a record-breaking number of female air guitarists on the second, the Compulsory Song Round in Oulu, Finland on Friday 26 August. Total of four women rumbled the Rage Against the Machine classic Without a Face – resulting to a new female Air Guitar World Champion, Aline “Devil’s Niece” Westphal from Germany. 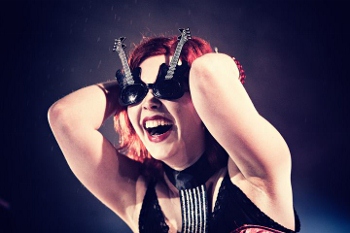 Fierce-looking winner made both the audience and the prestigious jury to feed off her hand with her seductively energetic performance to Foo Fighter’s Pretender. Devil’s Niece secured her victory on the Compulsory Song Round with scoring even with the 1st runner-up, American Viking Justin “Nordic Thunder” Howard of the United States. The third place, Veronica “Like Ever Gin” Mullerova of the Czech Republic. 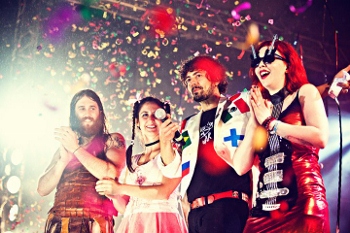 Nordic Thunder, Like Ever Gin (left) & Devil´s Niece with Björn Türoque.
The World Champion goes home with a constantly-growing international fan base, but also an electric guitar impeccably handcrafted by Matti Nevalainen of Flying Finn guitars. On the stage the five Dark Horses to clear the Thursday´s Qualifying Round challenged the Air Guitar Champions from Estonia, Malaysia, the United Kingdom, the United States, Belgium, Germany, Ireland, Russia, Czech Republic, France, Ukraine and Brazil. Despite the rainy weather, the World Final gathered an impressive audience of 7000 people to the Oulu Marketplace.

Juha Torvinen, the godfather of Air Guitar chaired a prestigious and sharp-eyed jury who analyzed the contestants as the Finals evening turned into night. Torvinen was supported by the air-narchist and beloved Dark Horse’s host Jani Kortti, and three national championships organizers from the AGWC Network, Arjan Buffing of Thailand, Raphaël Monnanteuil of Belgium and Frank Lange of Germany. As the Air Guitar tradition has it, after the winner was chosen, all the contestants took the stage once more and encouraged the whole world to play Air Guitar to Neil Young´s Rockin´ in the Free World while the fireworks lighted the sky to celebrate the 16th anniversary. 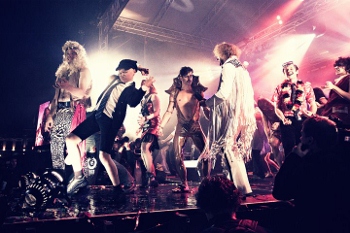 The night also included performances by the pop star Anna Abreu. The additional programme included also the groovy performance of the rock group Moses Hazy, as well as the wacky French air band Airnadette. The glorious evening was hosted by the Master of Airemonies, Dan “Björn Türoque” Crane.
The objective of the Air Guitar Championships in to promote world peace – according to Air Guitar ideology, wars will end, climate change stops and all bad things disappear if all the people in the world play the Air Guitar.

More photos can be found here

A video about this year´s contest