Metalheim is Helsinki´s new concert/promotion/production agency, run by the famous Teemu Suominen, so we can be reassured of the quality heavy events from that enterprise in the future. And even though this launch party was sold as another concert at Tavastia, by the atmosphere and especially by the band´s behaviour on stage, it was more like a bigger house party, casual and very easy-going.

Dauntless was the opener of the evening, so didn´t have that much audience yet, although it obviously didn´t bother anyone. All looked liked they were having fun celebrating, regardless the surroundings. For the band this concert was also a release party for their new album, which is great news for the followers of heavy Finnish metal, borderline with doom. With their performance, Dauntless set good mood for the party, warming up those headbangers´ necks and voices, as by their set´s end, at least the front rows were singing along and shouting, cheering the musicians.

After short break, the stage went to Kiuas. This is by far the best act Finland yet has to offer. It is not annoyingly mainstream that comes from practically any device that makes sound, unlike a few other bands in the genre which are constantly in all media possible. Yet Kiuas is this quality heavy music, which is unique and consistent. 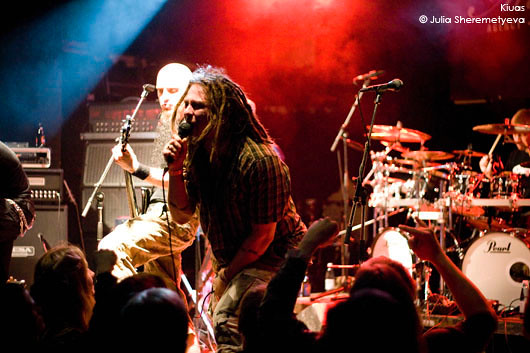 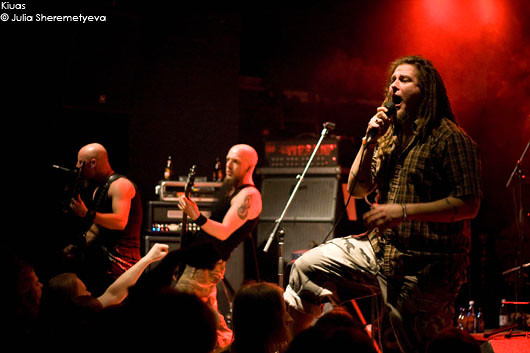 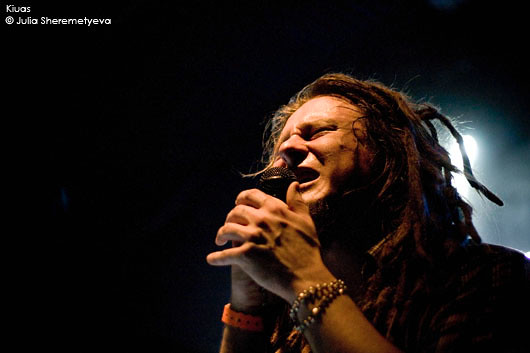 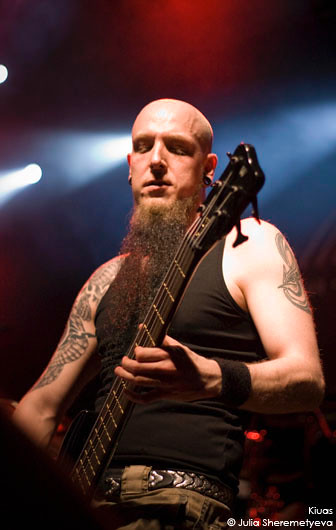 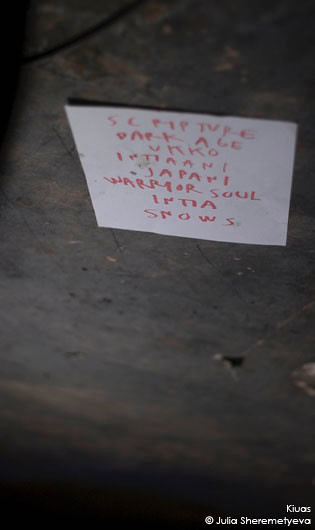 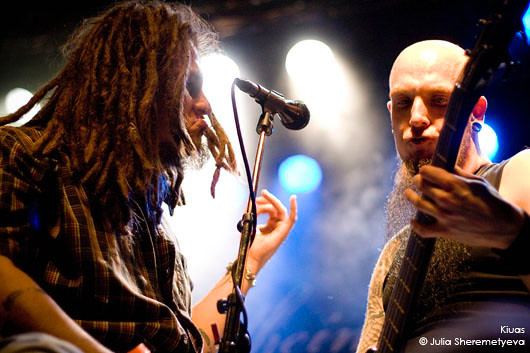 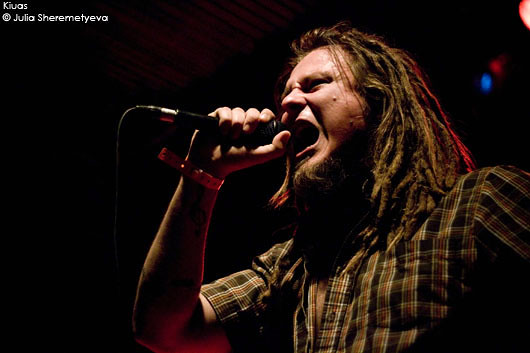 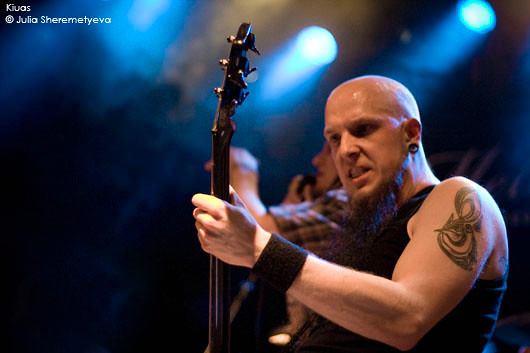 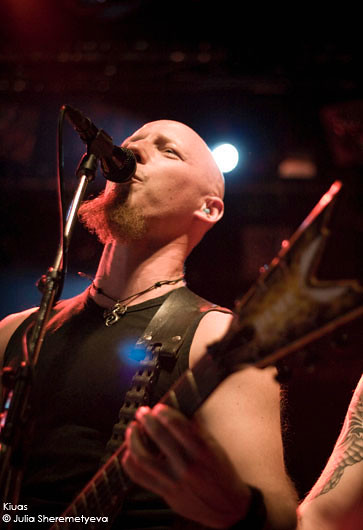 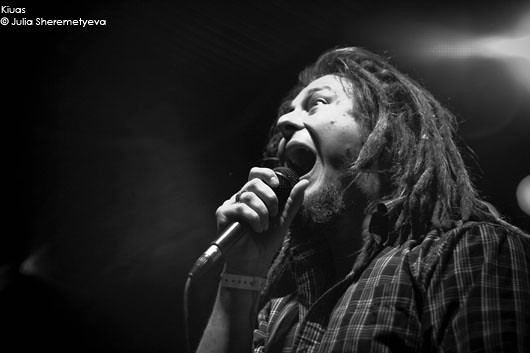 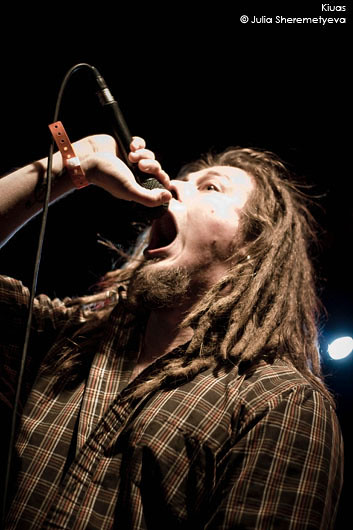 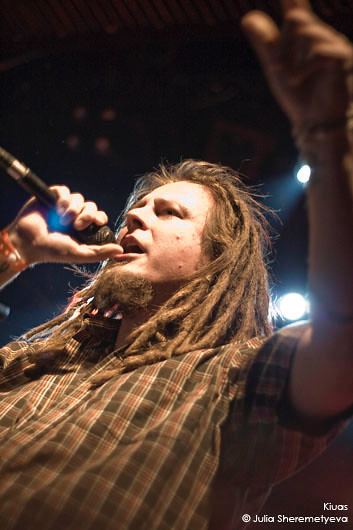 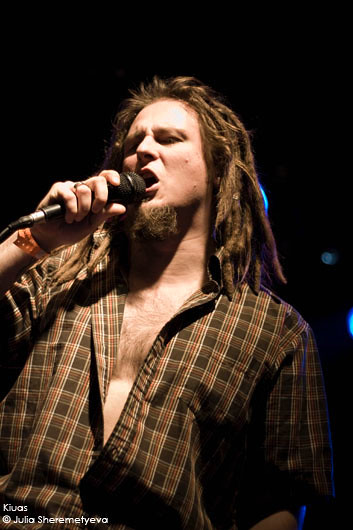 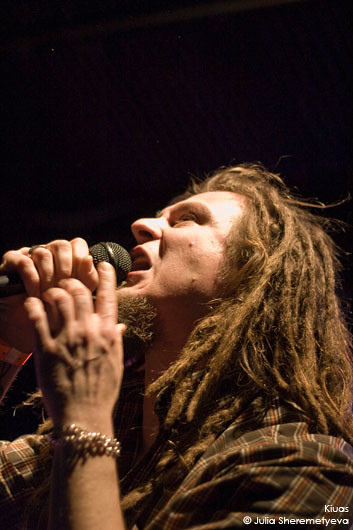 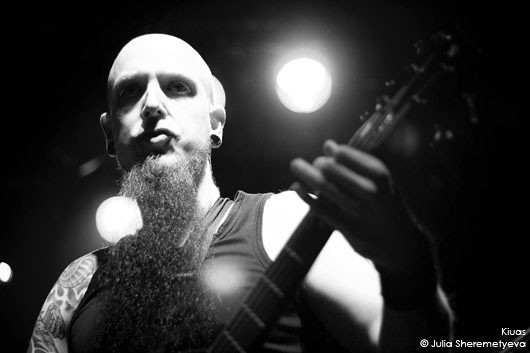 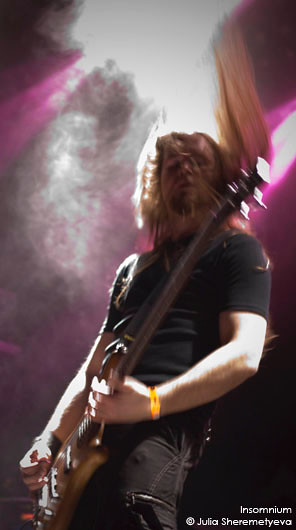 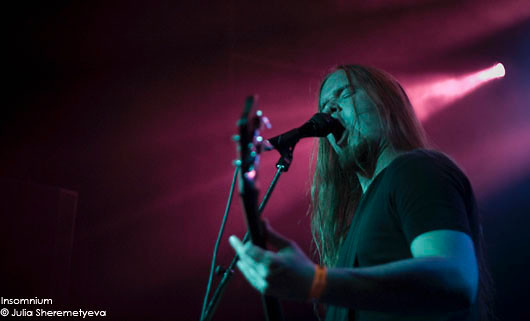 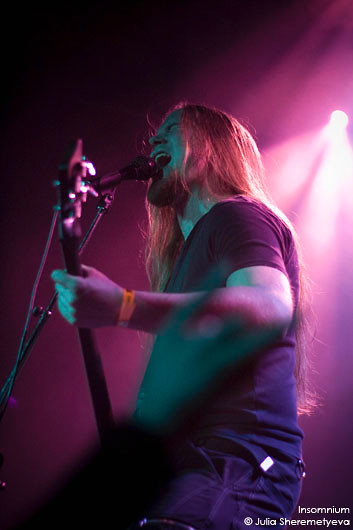 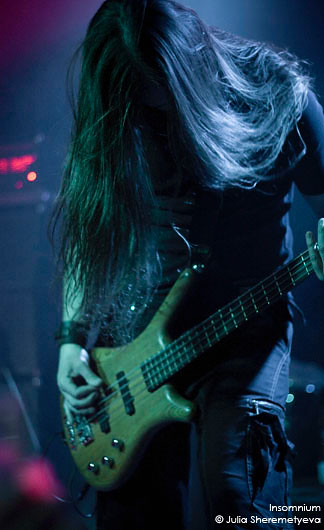 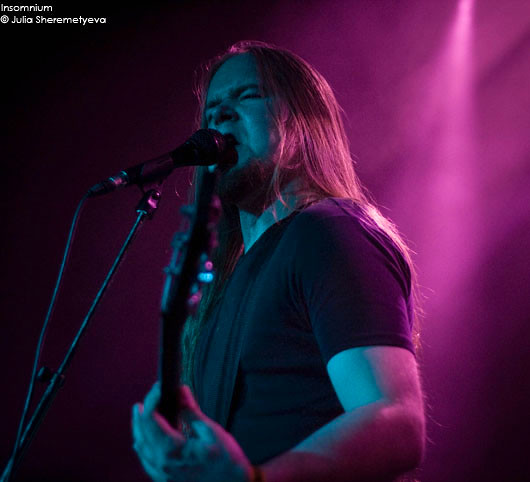 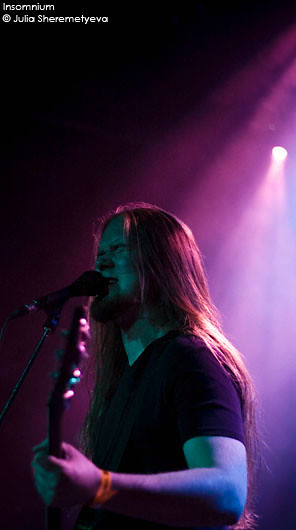 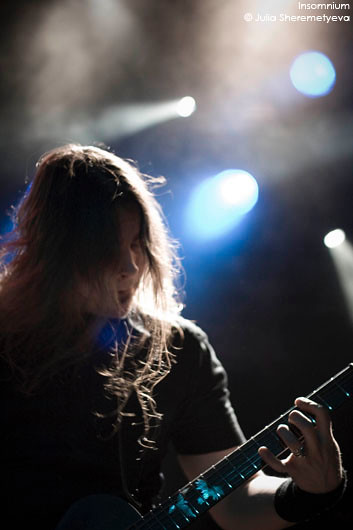 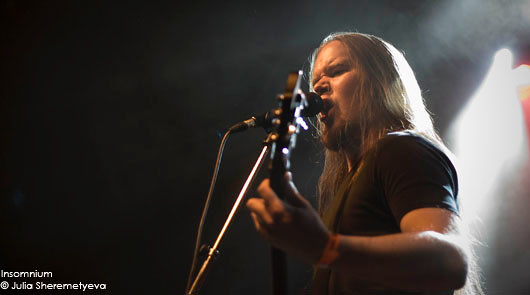 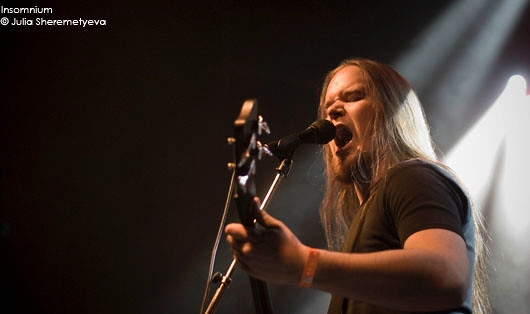 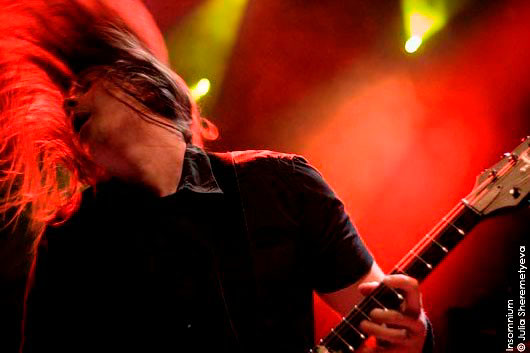 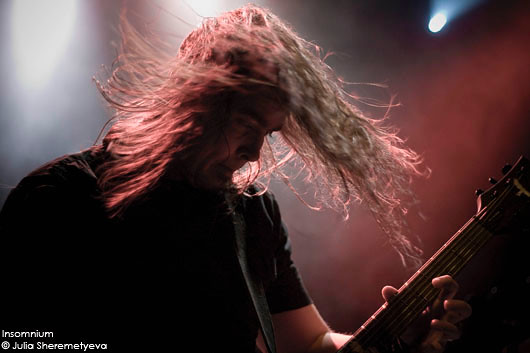 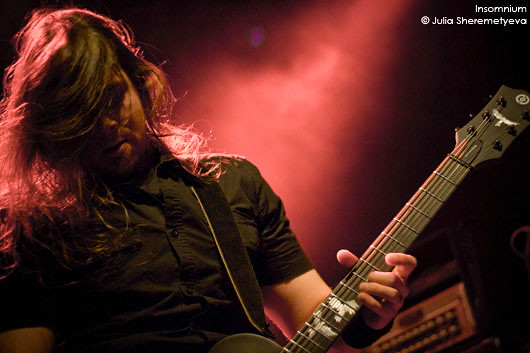 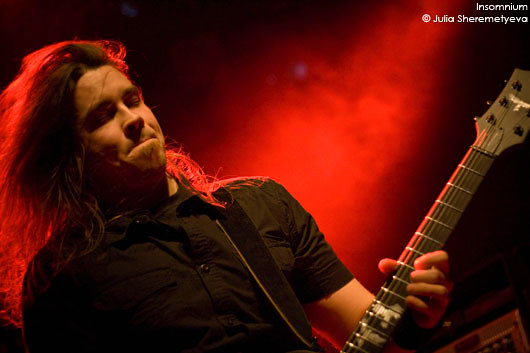 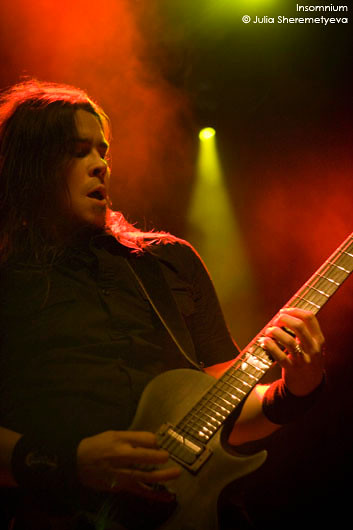 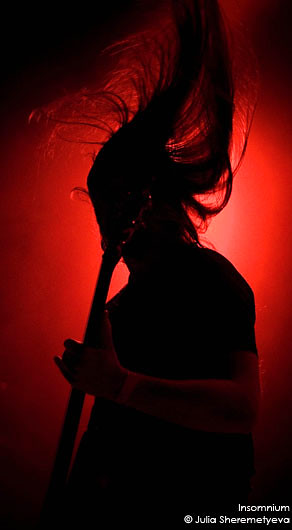 The band isn´t that old even and it evokes somehow sentimental feelings, seeing them so confident and cool doing a live show of such high quality, whilst still remembering their first appearance at Spinefeast some 5 years ago, when Ilja still had short hair, they all were semi-shy Finnish boys in black. Now it is an act like no other, with the vocals which are incomparable to any other male in this country. Ilja doesn´t growl, but he sings and it is only Roy Kahn (of Kamelot) who can be put on the same scale as him, but otherwise it is just unique. Alongside Ilja is the acknowledged Guitar Hero Mikko Salovara, who didn´t miss a chance to impress us with a few improvisations, just like the rest of the band. Ilja gave a speech almost after every song, joking, playing around and communicating with the audience, and so vividly that even those of us with no Finnish skills could laugh, just watching his facial expressions. The theme of this show seemed to be “everyone can karaoke”, as Ilja generously and often passed on the microphone to his band members, as well as the front rows, regardless how well people knew the lyrics or how well their singing ability really was. One can also notice hints of arrogance and self-admiration coming from those guys, but given what perfect quality show they put out, all other sins are forgiven

What was probably planned as evening´s highlight, somehow became a more philosophical end to the night: Insomnium. They had taken over the audience in such condition left after the humorous Kiuas, and slowly turned it to doom… At the beginning of the set there were more people in the audience than towards the end, sadly… But the devoted headbangers made good use of the space freed. Insomnium are a very beautiful combination of this desperation in the voice, and beauty of the melodies, which is well arranged without so many vocal parts. This band is a rarity nowadays to witness live, so a really special show when it does happen and the emotional charge they give is breathtaking, so hopeless and yet touching. In the way their music was presented live, set in dimmed darker lights, only made it more intense and pleasurable.
We can only hope now that with such great opening Metalheim will continue among the same lines in the future, good luck Teemu!