Some of the reasons why SAUZIPF in Southern Austria stands out from the masses of summer festivals: A great location (farm area next to the woods, near Millstätter lake), a small but smooth organisation and a loyal fan community that is still growing. Also in Sauzipf´s eighth year national and international acts (a spectrum from Alternative to Punk to Metal) came to play in an idyllic surrounding, right at Mirnock mountain. Smaller bands in particular get a chance to perform in front of a mixed audience.

Unfortunately the weather wasn´t too friendly that weekend, so campers and audience had to struggle with rain showers. Nothing new because up to now it has always rained during Sauzipf. Luckily this time there was no mud-wrestling, and the spirits were still high. Bands and audience had an energetic and enthusiastic party at this excellent Underground Festival.

Moreover, besides the usual festival food you could find vegetarian food and many local delicacies, like “Käsnudel” and “Gurktaler Alpenkräuter” (= liquor, a bit like Jägermeister, that caused some visitor “circuit malfunctions”). Still the “Saucurity” didn´t have much to do, and also the “Alkomatpatrol” rather visited the bar than checking on people under the influence 🙂

You could warm your tired bones at huge camp fires, where tribal drumming fed you with new energy. Who could not find room there, found more oil barrel fires near the stage. (MS)

Murder the Government opened the festival. The guys who looked hardly older than 14 impressed with their Punk outfit. Apriaca I have seen many times, as they are from the neighbourhood (Osttirol). They had a good set, as usual, but seemed to lack motivation a bit. Stoned Hedge (literally ;P) had interesting news, singer Tommy, face almost completely hidden by his cap, announced that this will be his last show… as bachelor :P.

Damn drew a lot of people to the stage, partly because of the front woman. The band reminded of Arch Enemy, with an energetic Antonie at the mike who had the guys´ hearts beat faster. Damn played powerful Thrash, for me it was a pity that afterwards everybody rather talked about the front woman than the music. Rotor was my personal highlight: Instrumental 70s Flower Rock that wasn´t played better back then.

The openers Sertycon gave merchandise to everybody who dared to get in the center of a Wall of Death (see http://www.youtube.com/watch?v=pQlQD3hl94w).

Magnificent Brotherhood could even put a smile on the face of the most angry people, and tears in my eyes, because I have never watched a Psychedelic Rock band before and know that kind of sound only via stories or old records from my Hippie relatives. The guys from Berlin resurrected the late 60s spirit. Who would fall for The Kinks, The Animals or the Beatles with last-century-stuff, if you have Magnificent Brotherhood from this century 🙂 (CG)

The Punk rockers Rentokill had some initial sound problems but still initiated the first big mosh pit in front of the stage, which inspired the band to go off even more. After that To Kill from Rome came on stage. This Italian Hardcore Band has been gathering devoted fans since 2004 that had a ball in front of the stage. New in the line up is female guitarist Camilla who drew a lot of attention. The vegans asked for five min reflection time on the suffering of animals, which went unnoticed, but did not harm the spirits either.

After a short break the secret headliners Orange Goblin from London appeared on stage, and a weird black neon-green backdrop immediately announced what was coming. Ben Ward (v), Pete O`Malley (g), Martyn Millard (b) and Chris Turner (d) gave everything right from the start, one hit after the other, with special attention to their second album „Time Travelling Blues“ („Blue Snow“, „Shine“). Also a song from the new CD “Cities of Frost” – „Healing through fire“ – was in the set. Their heavy powerful Stoner Rock´n´Roll inspired the audience, and there were many in the first rows who knew every single line to sing along.

Singer Benn Ward was a bit limited by the micro cable, but he still kept in touch (literally) with fans in the first rows and even did some crowdsurfing. Obviously tipsy but highly motivated, he thrilled the audience and made them laugh with his “Orange- Goooblin” chants. Despite the starting rain shower the gig was a lot of fun, and after two encores the fans still would have wanted more. (MS)

No chance for boredom with the fun band Ultrawurscht (“Wurscht” could be like “Wurst”, sausage, but also mean “whatever”, the ed.) Besides funny comments of drummer Hans Wurscht and 3 second-Grindcore they had an eating competition. Via internet two candidates had been selected, each had to eat 1 kg Leberkäse (type of meat loaf) during the show. Finally Dr. Mett Wurscht (voc) followed those “cloths off” chants and sang the last song just wearing a thong. (CG)

Despite the weather Sauzipf was again a very special festival, organised with heart and soul and tireless efforts. Big thanks to promoter Heiner and his friendly crew for two unforgettable days! 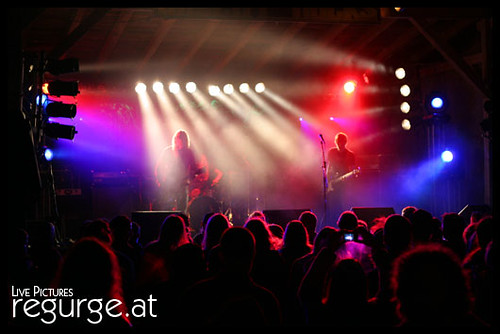