Whilst I announced that REA GARVEY was the show to attend for summer feels, Bremen kinda failed at bringing this feeling along. The clouds and wind made everyone wonder if we were getting through the show dry or if it was going to be a wet time partying. Spoiler: we got through without a single drop of rain, but even Rea himself was mentioning that they were wondering how the weather was going to develop, yet not having expected any other weather than this as it´s Northern Germany after all.

Despite Covid still being round, despite the weather and maybe despite the not so low ticket prices, the Seebühne in Bremen was filled quite nicely – people had been waiting a while for shows to be happening again, and Rea Garvey hasn´t been rocking out on stages much lately either. That he hasn´t been used to all the rocking showed rather quickly, as he himself also admitted – playing shows is the best workout that you can possibly get, if you give it all and don´t hold back. And the latter is something that you will never see with Rea Garvey – simply because it cannot happen if you feel this warmth in your heart that music gives you.

And this feeling, this ultimate joy of performing made it so easy to pull the crowd along – the first tunes were played, and rarely anyone in the whole venue remained seated. Instead everyone was up, ready to dance, sing along, to welcome him and his amazing band with open arms – a pity though that open air venues make it tougher to really get a grip of how well the audience is responding. When singing along in an indoor venue, it sounds like a massive wall, here you might´ve gotten the feeling that there was the typical northern type of enthusiasm, a beer in hand and a bit of singing along for yourself. Looking into people´s faces, looking at the waving arms, at the hands clapping, you saw a totally different picture.

Especially during the old Reamonn songs „Supergirl“ and the mashed up „Tonight“ you saw who´s been around for a while when it comes to his music and who´s been rather new – the older generation (me included) seemed far more touched than the younger fans. These old tracks don´t only bring back memories of (good) old times, but also show how amazingly soft and yet at the very same time strong Rea´s voice can be.

After these ballads, that ere enjoyed whilst sitting and regaining some energy, we were pushed into the part of the show where everyone had to give everything that the own inner batteries still offered . Whilst dancing, singing along, and the choice of songs clearly was the right one – if anyone was able to hold their feet still during songs such as „Color me in“ and „Oh my love“, the person has the most strong sense of self-control. Looking at the dancing crowd must´ve been an amazing look off stage, judging from all the happiness that kept on increasing on stage to an extend where you wondered if it was already more than a 100% of enthusiasm.

Being around many shows, I´ve experienced a lot of great talking on stage, a lot of laughs and funny story – but let´s be clear, Rea Garvey beats it all in these regards. His adorable Irish accent when talking German, the partial search for the right words and him being so authentic as a person and telling stories with the full body language – nothing will ever come close to this. And when looking around, you can always see that this touches just everyone, the laughing, the smirks – and the cheering when he called a little boy up on stage for a little interview. It´s shown once more that his shows are the right thing for everyone, no matter the age. It´s a friendly get together, with the only goal to have a good time and celebrate good music.

What the audience enjoyed – at least I did – that there was no bowing, running off stage and waiting for the audience to go wild and cheer and scream for minutes until the band returns for the encores – we simply skipped that part, the crowd was loud and noisy and Rea Garvey and his band, alongside the fans, continued rocking on to „The one“, the classic „Wild love“ from his first solo album. But we didn´t quite get around the already mentioned procedure, as the band went offstage and came back to perform the last song of the evening: „Run for the border“. I am not totally sure if it was the right choice of a song to end a great evening, as it´s, despite being a nicely rocking song, still having a thoughtful message and I heard some critical voices afterwards from fans that had hoped for more positive vibes at the end of the show.

Nevertheless: Rea Garvey keeps on proving that he is an amazing live performer and the energy and this special touch to his voice during live shows will always beat his well produced albums by all means. The atmosphere he manages to create during his performance is touching everyone – no matter if it is moving you to tears or moving your feet, you´re moved. 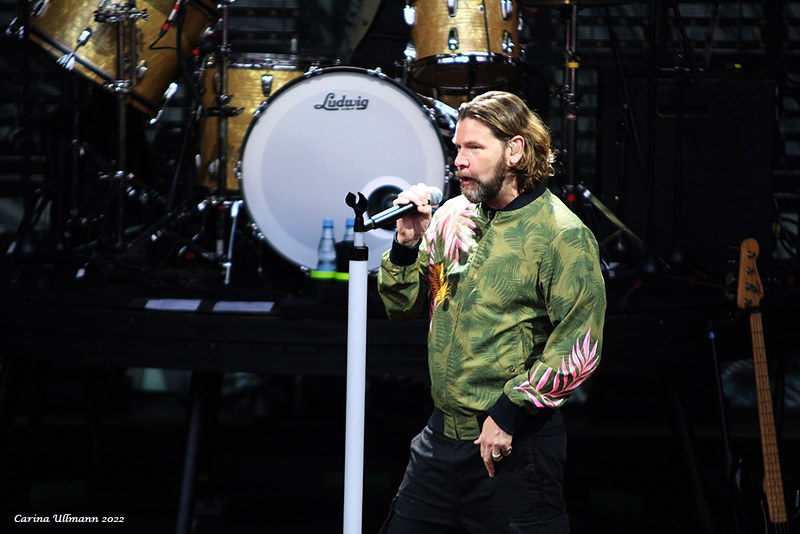 Setlist:
Intro & War
Is it love?
Armour
Talk to your body
Hey Hey Hey
Water
Supergirl & Tonight (Mix)
Kiss me
Beautiful Life
Can´t Stand The Silence
Sorry days
Pretty
Can´t Say No
Color me in
Oh my love
The one
Wild love
Run for the border