Tonight is very special because I had wanted to see D-A-D live for a long time. But always, always I was either sick, at work or on a holiday abroad when those Danes played at Z7. Tonight I finally, as Disney fan, will find out what happens at Disneyland after Dark.

There’s a mixed audience, (literally) old fans from the 80s as well as children, and many many Danes to support their compatriots. First on stage is Hangarvain and those guys from Napoli impress with fantastic Classic Rock / Blues; they just released their album  «The Great Machine». Sergio Mosca with his powerful voice and his likeable colleagues on stage get the audience rocking in no time.

After only a short break the D-A-D guys storm the stage – not only excellent musicians but also eye catchers with their weirt outfits. Their announcements are pretty amusing too, which singer Jesper Binzer delivers in German, sometimes requiring assistance from the audience when looking for words. He enjoys chatting with the audience which results in 15min over schedule, but it did not matter, the audience loved every minute. Binzer declares at the beginning that there is a huge problem, which is the Monday. Yet if everybody closes their eyes and meditate, they can make themselves believe it’s Friday – and later when he asks the crowd which day it is, they shout « Friday!» And some fans drink as if it’s indeed Friday for them.

Very fascinating are all those custom made 2-string Bass guitars of Stig Pedersen who also designs them: There’s a rocket, a double decker plane, a cow skull or an illuminated bass guitar. The band keeps the crowd active and very much entertained with chants like «Laust we love you!» or «Come on, Laust, kill the drums!» The set list contains many songs from their new album «A Prayer for the Loud», but also old hits like «Sleeping my Day Away». Both Jesper Binzer and Stig Pedersen, who takes over vocals for two songs, are excellent singers, and I could not have wished for a better Monday evening entertainment. This is a wonderful live band you definitely have to go and watch! 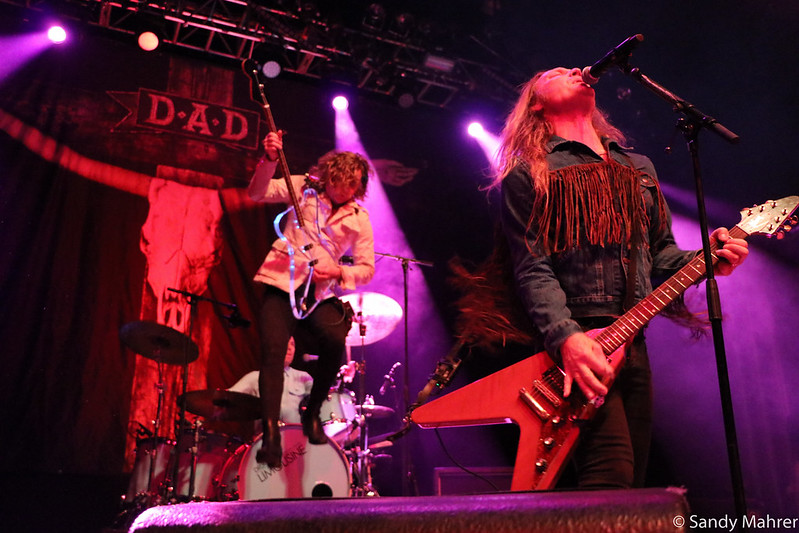