Icecold weather and in the middle of the week, yet this Power Rock duo attracts a lot of people, Swiss Rock at its finest as duouble feature at Z7.

Punctually at 8 Maxxwell from Luzern begin their set. They are Core Leoni’s tour support and seem to get better and better since their singer change five years ago. Now bands who hire Maxxwell need to be careful not to end up in the shadow of their support act. The audience is mesmerized by songs from the «Metalized» album and the guys are highly motivated and deliver a great show.

The changeover is quite long and people begin to get nervous; audiences don’t like to wait long. CoreLeoni begin almost according to schedule with «Standing in the Light». This little side project of Leoni with Gotthard colleague Hena Habegger developed into a success story and they even have their second album out. The concerts draw a lot of audience and some even prefer Ronnie Romero interpreting old Gotthard stuff to Nic Maeder. I like both and the songs they sing are not the same anyway.

Ronnie Romero is a fantastic singer and showman, there is a lot of action on stage and watching the show is a pleasure. The whole band enjoys this gig a lot which translates to the audience, which is all smiles too; plus there is some comedy statements by Leoni. As a highlight Igor Gianola and Leoni suddenly appear among the crowd with their guitars to shred some soli. During «She goes Down» Romero a little bell labelled «Ring for Sex» on stage to the amusement of his band colleagues, then he hands it over to the audience, where the bell later disappears. Someone got a real nice concert souvenir. A fantastic show and the audience seems happy and relaxed when returning back home. 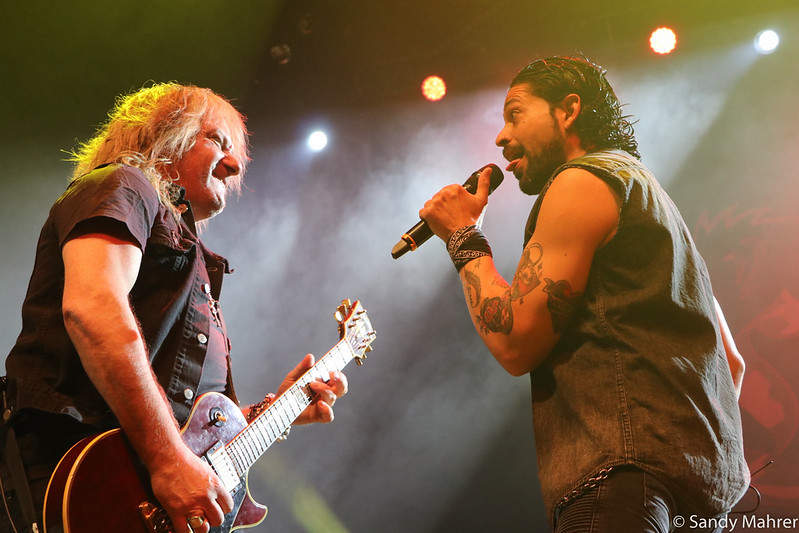