With autumn comes the club concert season and until X-mas there will be a lot going on at  Z7 in Pratteln; tonight it’s a Scandinavian Power package.

Heidra from Denmark warm up the crowd that still lacks in size but finds this mix of  Death, Folk and Power Metal Elements with clean and growl vocals quite appealing. Morten Bryld manages the switch between those two singing styles brilliantly and it’s a pleasure to listen to him. The band seems to be in excellent mood and this translates to the audience too. Those Danes are the highlight of this evening for me, convincing fully music-wise and show-wise. What a pity that a lot of people have not realized that the show started 30min earlier than usual and missed out on this act.

After a short changeover the Swedes In Mourning storm the stage. It is their first time in Switzerland and on this stage, hence it is difficult for them not to smile all the time. In Mourning are definitely the happiest band of the evening.  However, their rather melancholic and sinister music is not quite my cup of tea, despite the first-class skills. The vocals – Tobias Netzell and Björn Pettersson take turns – are quite good too but cannot really top Heidra singer Morten Bryld: Nevertheless a good show of this band, on point thanks to the perfectly fitting sound and light environment.

The headliner of tonight are the Finns  Omnium Gatherum. It has been a while since I have watched this band live in Finland, therefore I am curious about their development. In the crowd you can also spot the musicians of both support acts – they don’t want to miss this show, or maybe they are in party mood as this tour is almost over after two weeks on the road.  Omnium Gatherum prepared a great set list which inspires the crowd and there’s a lot of action on and in front of the stage. A lot of headbanging and the crowd gladly follows the directions of singer Jukka Pelkonen, jumping or going silent on his command. He obviously enjoys it, being more and more relaxed after seeming slightly nervous in the beginning.

On guitar on this tour is Jani Liimatainen, replacing Joonas Koto who had to skip this tour for personal reasons. Jani was before with Sonata Arctica and has a new project with Anette Olzon (Ex-Nightwish). He seems to enjoy touring with a band a lot again and especially playing on a big stage. The guys deliver a great show and right afterwards attend to their fans at the merch table. A great band that really deserves a bit more attention. 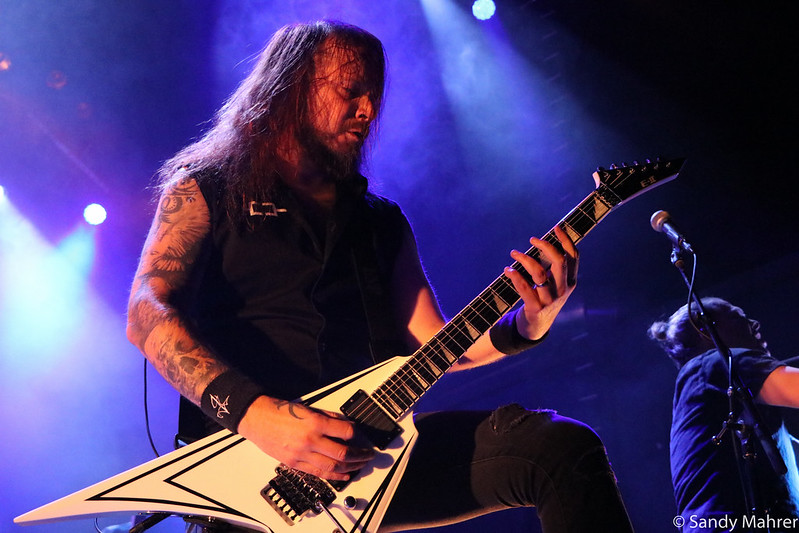