Body and soul would rather have summer and sunshine. The only good thing about winter are those numerous Metal concerts and that you can see more of them than at a festival. After some rain streets turned into ice ranges and therefore only about 500 people came to Z7 to celebrate a German Metal legend.

Basically it should start at 20 h but  Dead City Ruins  from down-under appear 30 min earlier to inspire the few people who have already arrived. Singer Steve Welsh convinces vocally and also with his faces and his headbanging. Bass player Luke Bolton remains in the background while the guitarists Tommy Tbone and Sean Blanchard raise hell on stage. TBone’s hair reminds you of Sideshow Bob in the Simpsons series. And drummer Nick Trajanovski is beating his drums wildly to drive the  band’s Rock Sound. The set of these Australians is short but really good. Too bad that a lot of people arrive during their final songs and therefore miss a lot.

After a short break it is time for Reece, the solo project of David Reece who sang on one album of Accept and Bonfire before. A great singer but he might be a difficult front man, as he indeed wants to remain the center of attention all the time and be the boss. At least that is the impression I get. During the show he seems a bit tired, but vocally and musically the performance is top. The songs are all really good and inspire the crowd, the whole band around this talented singer does a real good job.

21.30 h, the lights are dimmed to welcome U.D.O. on their Steelfactory tour. Which Metal fan does not know mastermind Udo Dirkschneider? But first on is his 26-year old son Sven to take his place at the drums. And it seems every drummer might dream of such a kit, it is also an eye catcher. 67-year old Udo is not quite so active in the show any more, and he’s a bit forgetful. The lyrics are displayed on a monitor for him and he cannot remember which album a certain song was from. Some were laughing but then Udo points out that it’s not so easy to remember everything of those 16 CDs he has released – and the laughter turns into respectful applause. He has been a front man for more years than most in the audience have been on this earth. And still he pulls it off to inspire fans of a much younger generation. 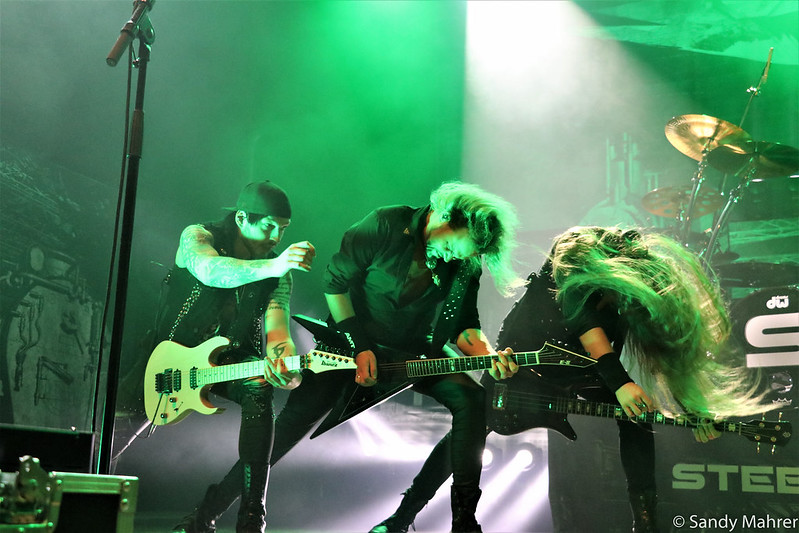 The action on stage is delivered by the guitarists  Andrey Smirnov and Fabian Dee Dammers and basser Tilen Hudrap – they have a lot of fun on stage while Udo focuses on singing. The audience reactions are great but those Metal legends had deserved more people, even on a Thursday with icy roads. My adventurous trip to Z7 for those 3 bands was definitely worth it.