Once again STALKER managed to follow a tour through central Europe – this time our YOU GOT STALKED victims are HIM and Paradise Lost:   (interactive gallery at the bottom)

Köln, Palladium, 24.2.2008
Finland, Germany, Europe. The UK, the US, followed by the rest of the world. Six regular albums, loads of gold and platinum records, awards one after the other and finally singer Ville Valo´s check into rehab in summer 2007. That is the “interim result” of HIM´s success story. The more excited we were what to expect of this evening in Cologne.

As support Paradise Lost had joined the bill, which is almost an insult regarding the band’s cult status in terms of Gothic Metal. But of course, both acts perfectly matched, and so the venue was nearly sold out. Paradise Lost knew how to get the audience in a proper mood for this night’s headliner and Nick Holmes proved to be very relaxed and cheerful. The front man didn’t miss a chance to animate the crowd. Paradise Lost played a good, well balanced Best-Of set with highlights like “Erased” or “Mystify” from the album “Symbol Of Life” (2002).

To put HIM in their true light, several neon lights had been placed behind the musicians and shone the whole show in every imaginable colour combination, from pink/violet to blue/green. A modern, but still very cold and typical scenery.

Apart from some sound difficulties at the beginning, after “Wings Of A Butterfly” the band was audibly well attuned. With the two singles “Kiss Of Dawn” and “Bleed Well” leading the way, the songs from the current album “Venus Doom” sounded heavy but mellow and could be perfectly incorporated into the diversified set. Singer Ville changed from Becks to Volvic and his voice appeared to be in a good shape. Even the magic from the old days between him and bass player Migé seemed back for a few moments and the band obviously had a nice time on stage. Though “Join Me” may no longer be the classic encore, the audience cheered as always along lots of old tunes like “Right Here In My Arms”, “Poison Girl” and “It’s All Tears” which were presented in slightly different versions. With varied keyboard parts and several solos also Burton (keyboards), Gas (drums) and Linde (guitar) got a chance, from whom especially the latter captivated with his shirt that said “DREI KARTOFFELN” (i.e. “Three Potatoes”). However, the audience waited in vain for a solution. Great live tracks like “Soul On Fire” and “Buried Alive By Love” provided the set with the necessary density and with “Funeral of Hearts”, HIM finally ended a successful show under a rain of disco ball effects. (NR)

Hamburg, Docks, 27.2.2008
Parallel to Reeperbahn in Hamburg at the Spielbudenplatz you can find the rather small Docks Club, about 1300 find place here. Known for its memorable concert events, the cult club has to offer us something very special the second night in a row – HIM with support Paradise Lost! The promoters surely don`t have to worry about the profitability of those two evenings, the hall is filling up again in no time as soon as the doors open 8pm.

The attentive visitor recognizes at once, the stage is already prepared for Paradise Lost – that means no second support? Quite uncommon that such a top-class band simply enters the stage without any warm-up. Things change quickly, not too long ago HIM did the support at a Paradise Lost UK-tour. The band is known for its quite flexible music-style, which through the years took away quite a lot of their fans, but as well brought them a lot of new fans. As I am not up to date, I am surprised by the transformation to a hard rock band with a apparent metal-decoration in the shape of celtic thorn tendril banners in the background and the long shagged hair of the frontman and the guitarist. Unfortunately the nice Englishmen can`t deliver to our ears what the eyes promised.

The confession of singer Nick Holmes to have been partying last night and getting very drunk nearly seems like an apology. Yet by far it hasn`t been a bad concert.

HIM
Whoops, what`s going on now? All at once visions of Bedouins on camels in the Sahara followed by wildly dancing bush people appear in your head… what kind of music is this? Everybody is waiting for Gas entering the stage in a belly dancing costume and Burton hypnotizing a snake whilst Linde is smoking the water pipe in one corner and Ville and Mige sitting in the other in the dust playing Tavli… a beautiful idea that fits with the „Venus Doom“- Hippie stage deco, which the fast assistants now are being set. Many may have mused about the function of the acrylic glass walls around the drum-kit, here´s the answer: it´s there to lessen the drums, so it has acoustic reasons, no self- protection. Being busy with musing and dreaming for a while, some are getting anxious, the fear this concert could be cancelled after Ville`s asthma attack in cologne rises. All the dreaming, musing and fearing then changes immediately into a frenetic ecstacy as the band finally enters the stage. The opener „The Kiss of Dawn“ takes everybody over and in the following two hours, encore inclusive, the appeal of this band completely takes hold of us. Despite his alarming skinny appearance and his tattered health, Ville masters this show with bravura and leads us through the thrills of all the HIM albums, except „Deep Shadows and Brilliant Highlights“.

After he recommended the Norwegian black metalers to us very warmly, he presents proudly his recently bought Gorgoroth- Shirt. Very well- behaved he keeps drinking water and smokes less, even gives his cigarettes to Burton for secure custody, who then first lights up one for himself. Such entertaining scenes accumulate today, Ville insults Mige in joke as he including all band colleges and audience simply doesn`t want to understand what Ville tries to tell, pure comedy. Actually Ville gets bogged down all the time, when he`s making an announcement and then even informs us about the results of his therapy lessons, entertaining but bizarre. Great emotions and the remarkable familiar atmosphere arise last but not least with the help of the more contemplative moments like “Sleepwalking past Hope“ and „Funeral of Hearts“. The new album was presented completely except the last track “Cianite Sun“, the song quality on the album has been converted absolutely convincing into a live performance and can be compared favourably with rock concerts in the 60s. The only deficit has been the old known, Villes` voice has sometimes been very much too quiet, that`s why at least the low pitched voice completely disappeared in the base melody and in the depth of the bass-drum.

The gentlemen take up a long time until they at twelve enter the stage in front of the completely enthusiastic audience again, who were already preparing themselves for a sit down strike. It goes on with „Vampire Heart“, followed by a Black Sabbath- cover according to the principle out of „Black Sabbath“ make „The Sacrament“. You wish to be trapped in a time warp on an evening like this! (KD)

It has been 2 years since their last Vienna gig. Our 5 favourite Finns around Ville Valo exhilarated us once more with their music. Fans from all over Austria, even from abroad, rushed to Vienna like moths into the light to see them.

After touring with other Finns in 2006, namely Negative and The Rasmus, they allied with the 5 rockers of Paradise Lost this time. But no worries about paradise being lost: The 5 Brit’s bodacious offbeat more than rocked! Those who thought that this was the best they’d get was taught better. The reply to Nick Holmes’ question if the audience even knew his band was answered in the affirmative with an uproar which made the guys kick off and rock the house. To the distress of many fans in the audience, yelling for an encore, Paradise Lost’s gig ended after 60 minutes with the song “So Much Is Lost” and the Brits gave way for the main act.

While the scenery was modified not only spirits among the audience rose higher but temperature seemed to align with Finnish saunas. After torturous minutes of waiting Ville, Migé, Linde, Gas and Burton said hello to Vienna with “Passions Killing Floor”. Well tried hits like “Wicked Game”, “Your Sweet 666” and “It’s All Tears” followed. When they put their instruments to “Join Me” Ville’s band buddies were accompanied by the fans rather than by Ville himself.

The charismatic singer used such little pauses to light his cigarettes and jest with the audience. “Oh, we have some virgins here tonight”, he exclaimed as a reaction to some hysterically screaming female fans. Songs like “Right Here In My Arms”, “Buried Alive By Love”, “Soul On Fire” and the long and beautiful “Sleepwalking Past Hope” from their new record “Venus Doom” the band once more proved that they are masters of their instruments. Particularly Linde convinced with some solo parts on his guitar. Why he wanted to have “Drei Kartoffeln” (three potatoes), as was written on his t-shirt, will continue to be a mystery.

As always, many fans didn’t hesitate to demonstrate their passion for the band by throwing things on stage. Among them not only a baked gingerbread heartagram, labelled with the Finnish words “save the forests – eat more woodchucks”, but also a pink bra which reminded of boy band concerts.

The cherry on top of the gig was the song “Funeral Of Hearts” with which Ville & Co left their fans to the night, without an encore because they had to head straight for the Czech Republic. Anyways, Mr. Valo put it very accurately: It is a matter of quality, not quantity. 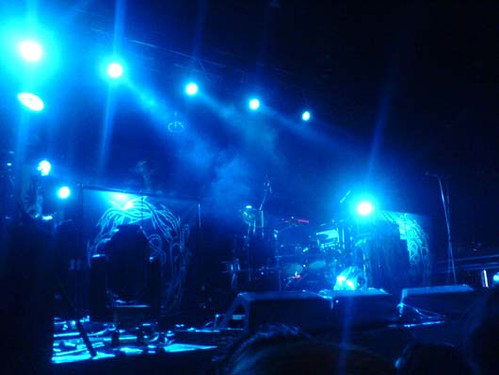 Jim Kroft: “Most of the tools I have developed have been from necessity.” 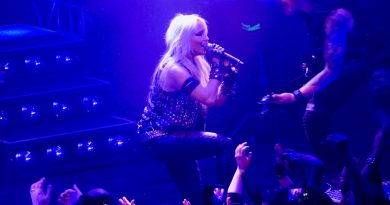