Enemy Of Reality is a symphonic metal band from Greece that impressed me a lot when I saw them live on the tour with Therion this spring. And no wonder, Iliana – Vocals, Steelianos – Guitars, Thanos – Bass, Philip – Drums (here on the photo still with keyboarder Leonidas who left this May) are anything but amateurs, as they have shared stages with acts like Leaves’ Eyes, Xandria, Delain, Anathema, Epica, Rage, Uli John Roth and more. The band has released two albums so far (with FYB Records, yet it seems that this independent label is out of business *) and now a live DVD containing their whole performance at the MFVF XII back from 2014, plus 3 acoustic songs from their set supporting Anneke Van Giersbergen in Athens in 2015 is available via the band website. Hence perfect timing for an interview…

How was the tour with Therion, did you like Finland?
The tour went great, we got some amazing experiences and memories from it. We played some really cool gigs, and made new friends from the audience, plus all the bands we were touring together were amazing people. Finland was awesome, really. Everything was well organized in all the venues, we had no problems, and in spite of the weather, snow and whatnot we had a blast. I ‘m not just saying this, it was probably our favourite and we can’t wait to come again.

How did you get on this tour or in contact with Therion?
We knew about the upcoming tour, contacted the agency, and the agency picked us from the many bands that submitted for the same reason. We had previously worked with Chiara in our latest album and performed with her on stage, and it ‘s likely that some people had seen us play in another festival before. 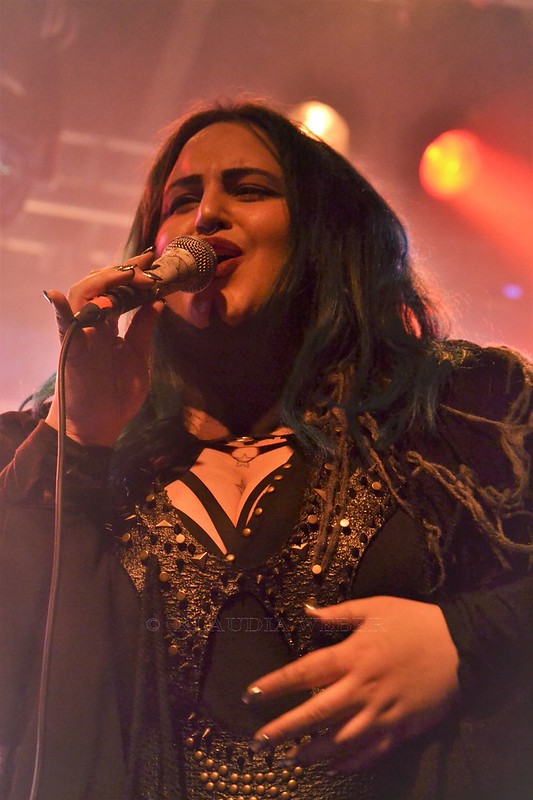 There are a lot of famous guest musicians on your Arakhne release, namely  Jeff Waters (Annihilator), Fabio Lione (ex-Rhapsody Of Fire, Angra) and Chiara Malvestiti (Therion/ Crysalys). How did that happen?
There were guest musicians on our first record, “Rejected Gods” (2014) as well: Christos Antoniou (SepticFlesh, Chaostar), Ailyn Giménez (Sirenia), Mike LePond (Symphony X), Androniki Skoula (Chaostar) and Maxi Nil (Jaded Star, ex-Visions of Atlantis).
We had met most of them, some of them we were friends with, we asked and they were up for it. But to be honest, we needed the guests for specific reasons, in order to serve our songs and our concept better. Fabio Lione was singing in the role of Narcissus, we needed this type of beautiful male vocals for “Reflected”, Chiara was singing as “Arakhne” in Showdown in a duet with Iliana (as Athena). As for Jeff Waters, we met at a festival we were playing a few years back, our track “Nouthetisis” had a thrashy vibe to it, so it felt right to have his character in the guitar solo.

Maybe tell us a bit about the band – who are the band members? How did you meet each other and form this band?
We were formed back in 2013. Iliana (vocals), already known for her participation in SepticFlesh ‘s “The Great Mass” and Philip (drums, well known in the local scene) had left their previous band to do their own thing. They contacted me (Steelianos) at a time I had stopped engaging with bands for a few months, after some common friends introduced us, and I was up for the challenge. We wanted to create a band that mixed all our influences, symphonic metal, prog, power, pretty much everything we like. At the time I was playing with Marianthie (keyboards on “Rejected Gods”) in another band, so I brought her with me, and lastly we met Thanos (bass, previously working with black metal acts) a few weeks later. We all met, gradually became friends and started composing in late 2013. Our first record came out in Summer 2014.

How did your style develop? What are your musical roots and influences?
As I said before we all have different roots, with a common factor, metal. If we have to write a list for example, Iliana listens to every symphonic metal and female fronted band you can think of. Philip is into modern metal, Swedish melodic death scene, and grind core as well. Thanos listens to everything from classic heavy and power metal bands to progressive metal and black metal as well. As for me, I started out with the classic metal scene as well, but through the years I enjoy pretty much everything from jazz and blues to thrash/ speed, power, progressive and modern metal stuff. Some of us also listen to folk/traditional stuff from Greece as well as other countries. At first we wrote whatever felt right, and we still do that but try to serve the concept as much as possible. 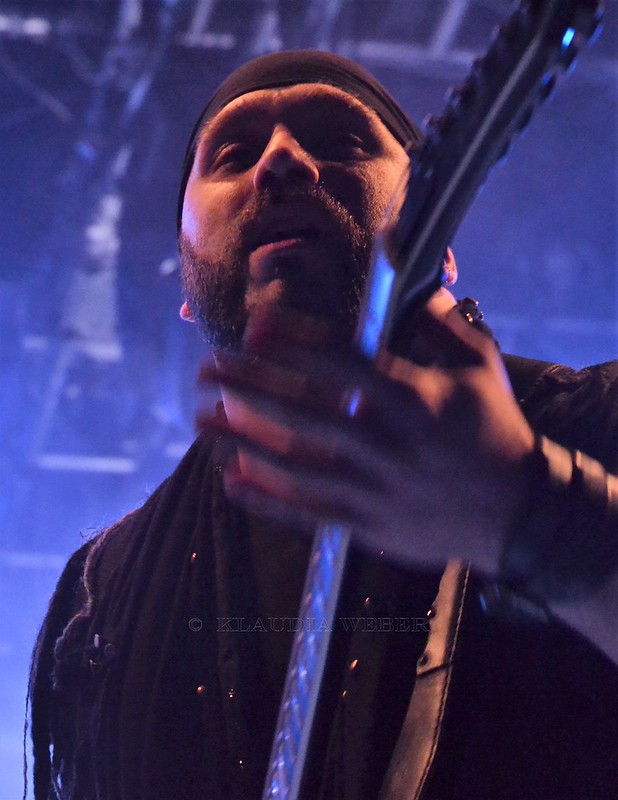 How do you write your music and lyrics, is it teamwork and do you have a particular philosophy behind your works?
Yes, pretty much we write everything by ourselves. In our first album Marianthie (Keyboards) contributed in the song writing process too, and the second album Leonidas (second keyboard player) contributed as well. Lyrics are usually handled by Thanos (bass). The concept on Arakhne was the first thing that we all agreed before we started working on it, and then Iliana wrote her vocal lines prior to the lyrics, while I was trading musical ideas with Leonidas and we finished writing everything in a few months since we started. We always try to bring the best of ourselves and serve the song-concept.

How did you come up with the band name – is there a story behind it?
Well the term was Nevermore ‘s to be frank. I don’t remember the exact moment that we came to this, but we had a philosophical discussion about how we perceive reality, and what our greater enemy is (sometimes it ‘s ourselves holding us back or altering the way we perceive things) One thing led to another, and when Iliana threw it it sounded massive so we agreed immediately.

Have you studied music, are you self-trained or how come you became musicians in first place?
We ‘ve all studied music. Iliana has a classical singing diploma, so she ‘s pretty well trained for decades and currently is a vocal coach. Philip ‘s also gotten some drum lessons with the best drummers in Greece. Thanos had studied drums, guitar and bass. As for me, I was studying guitar for many years and I ‘m also an electric guitar coach for the past decade or so. Music ‘s a passion, every musician will tell you that. And we ‘re lucky enough to be doing what we do. 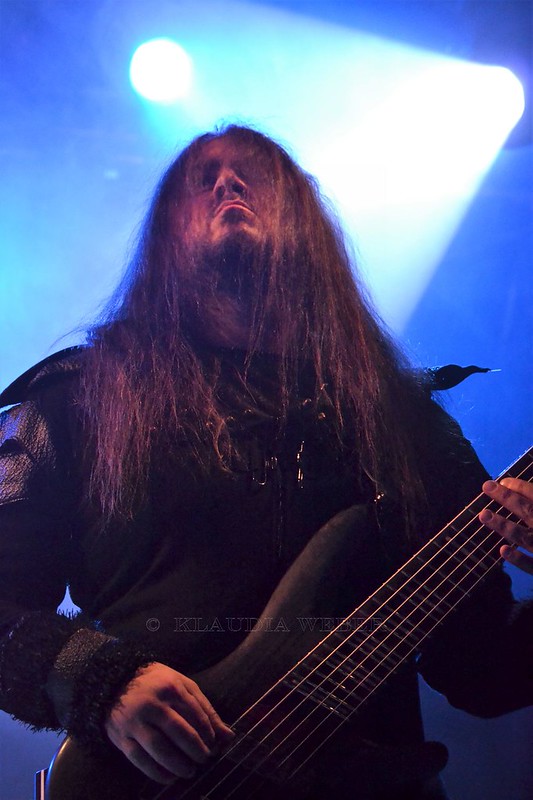 What is it like in your country to be a Rock / Metal band (playing the particular style you are playing)? What are you doing ”in real life”, when you are not making music?
It ‘s very difficult, being in a rock/ metal band is not a profession, it ‘s a passion and not an easy one. Other genres are much more mainstream than what we do and it ‘s much easier to be successful in these rather than metal. Although in Greece there is a solid scene with many amazing bands from all metal genres, the majority of the population listens to pop and folk music (Greek). But we keep fighting for this as we believe in this type of music. In real life the two of us, Philip and Thanos have regular day jobs, while Iliana and myself are lucky enough to be working on the music education with students in conservatories and private lessons.

Do you have a weird /absurd story to tell, e.g. about mishaps, OR what was the best / the worst that happened on your tour?
Well there have been many mishaps over the years in our live shows, especially on the technical side of things. I ‘ve fallen of the stage (without getting hurt luckily), in one festival many years back the technicians had switched some cables in my equipment they shouldn’t have so the whole first song came out to the audience with dry, clean guitars while I was listening to my amplifier in its normal distorted tone state. I remember a show where the other two bands had their PA’s “dying” in the middle of the show, so it was interrupted a couple of times and in the end cancelled. Those are just my memories, I ‘m sure the rest of the guys would remember much more details and stories to share.
The best things that happens to us in every tour is winning the audience, and people coming over and telling us how much they enjoyed it. We ‘ve made friends not just from the audience but the venue crew as well. And that ‘s why we do what we do. We ‘re having fun by making people having fun with our music.

What are your plans in the (near) future?
We ‘re currently in the process of composing our third album. We ‘re experimenting a lot. We finished touring with Therion, after that we had a couple of shows with SepticFlesh a few weeks back. In October we ‘ll perform at the FemMe (Female Metal Event) in the Netherlands. Make sure you find us on social media to stay in touch. We hope we ‘ll get back to Finland, soon!
Thank you very much for this interview, stay heavy! 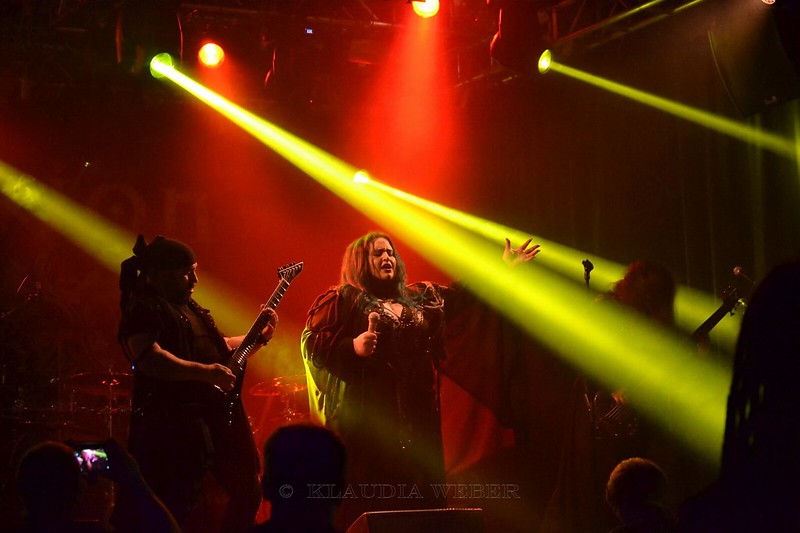