Summer season is festival season, and although Z7 cannot offer those any more, every year they build a big stage outside for a selection of big Open Air concerts. This year one of the chosen bands is Hammerfall, who have not visited Z7 for a while. Therefore a motley crowd fills the whole area yet despite the heat it is still possible to enjoy the show in a comfortable manner.

The evening is opened by Swiss Shakra who have been active for an eternity and have played at Z7 quite often, usually in a headliner position. I have been following this band for 20 years and quite enjoy that some things never change despite vocalist changes – the performance style, the audience – a lot of familiar faces. Shakra deliver a solid show and I cannot confirm rumours that singer Mark Fox has problems with his voice or uses playback – I have never noticed anything like that. It’s only his announcements that are a bit peculiar, even after all those years he appears to be a bit shy. Nevertheless Shakra inspire the crowd and indeed prepare the people for Sweden power.

After an extended changeover Hammerfall take over. I have not seen this band for a while and feel curious whether they are still as good as back then. The fans sing along right from the start and despite the lost soccer battle Switzerland – Sweden I spot a lot of Sweden t-shirts. Singer Joacim Cans is as good as back then although it seems he does not use those high registers any more. Only Oscar changed in those years, I remember seeing him sporting black hair and beard. Musically they are still top and deliver an excellent set list with a series of their hits, hence the fans are celebrating every minute of the Hammerfall show. A fantastic Open Air atmosphere and a wonderful Z7 experience. Unfortunately this was the last of the five Z7 Summer Nights this year but we hope to have some more of those great shows next year. 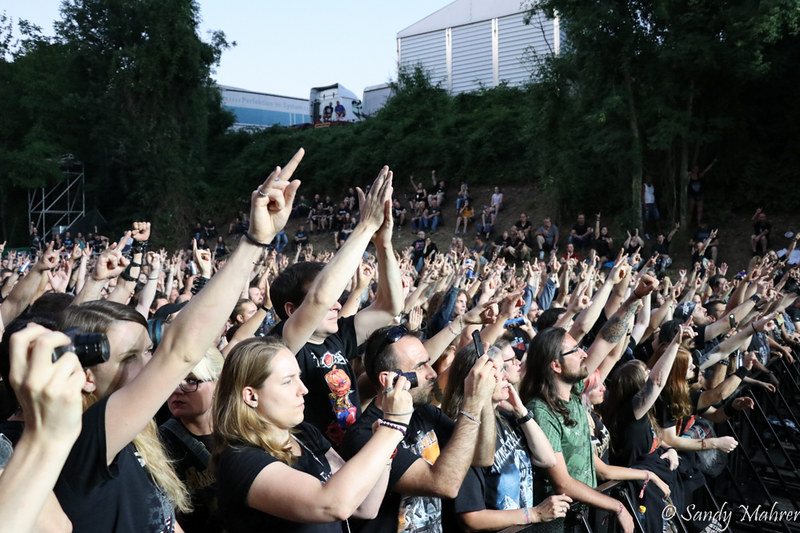