Powerful women and a legendary headliner on this still ongoing tour – this means lotsa people, therefore I decided to arrive earlier than usually. Not a bad decision as I was welcomed with a legendary song, Tristania, My Lost Lenore, as the perfect opening for this evening – thank you, Mr. DJ…

When the balcony at Nosturi is open, it means there will be a lot of people – well, it turned out a disadvantage for the first band, Enemy Of Reality from Greece. As the bar was open only upstairs, the pit downstairs looked a bit deserted, therefore the band might not have noticed there were twice as many people on the balcony following their Symphonic Metal plus Folk/Prog influences with interest. The voice of front lady Iliana was especially appealing – no opera overdose, no siren-screeching – simply a pleasure to listen to. The Lady Gaga Bad Romance cover came as a surprise… A short but impressive gig, I recommend to check out this band  YouTube Video

Female power part 2 – wow, Elli Berlin seems to have emerged straight from the Xenia TV-series. Arch Enemy (Growls) meets Guano Apes (energy), and also the male band colleagues unleashed a fierce show. Musically I would describe the Germans Null Positiv as a mix of Goth Rock and Nu Metal, or Neue Deutsche Welle / Industrial Metal crossover? Never mind, it was simply great, this lady can sing quite well too, thus making those high-quality German lyrics sound appealing. Another band to check out  Bandwebsite 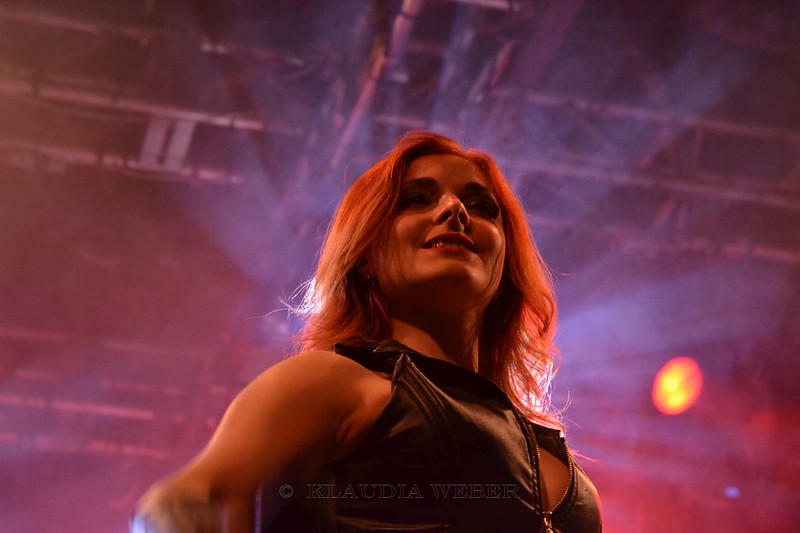 In the meantime the venue had filled up nicely on both floors, spirits were high also due to the band up next, the Russians Imperial Age on stage for the first time in Helsinki, and even Finland? Musically they fit the headliner quite well with their Symphonic Metal, but in this case I would rather use Manowar as a base line for comparison; simply because of all those catchy tunes and songs. It seems you can sing or shout along right away hearing those appealing tunes and wonderful vocal harmonies. A bombastic show, highly appreciated not only by the first rows with the local fan club… Impressive and very likeable, they mentioned to feel honoured about their first gig in Helsinki several times. Again, I can only recommend to check them out. Bandwebsite

Unfortunately it has been a while since I had the pleasure to see this band live – and I think there’s no need to write a lot about Swedish Therion. One of those acts that guarantees quality, thanks to founder and mastermind Christofer Johnsson and his awesome team. The Nosturi show had been announced as a long 2h set – another reason to be looking forward to it – yet for a fan this seems still too short, especially when this band’s many hits are performed so intensely, with such a lot of dedication. The focus of the set was directed towards the Beloved Antichrist project yet almost every release since 1996 was included, and naturally To Mega Therion was the grandiose finale of a fantastic gig that had the audience go nuts. I had the impression that the band was quite touched by those reactions too, and it turned out there were even several fans present who had been at the band’s first gig in Finland back then around 1991 at legendary Lepakko… therefore I can only recommend not to miss this tour package when it stops by your town (check the tour dates on the Bandwebsite ).

PS: As it might take a while until Beloved Antichrist will be released, you can enjoy the Therion tribute CD in the meantime, here the review