How popular is Thrash Metal in Finland? Well, let’s put it this way, it’s a Tuesday evening in Helsinki and the not-so-small venue is almost completely sold out… Might be the awesome package wrapped by TuskaLIVE too, considering that you don’t get to see Testament as headliners or Annihilator that often. For me it is the first time I witness the Circus balcony open for the audience …

With such a massive attendance rate it’s no surprise that the first act Vader has the audience wrapped around their little fingers instantly. Voc/Git-Mastermind Peter and his guys unleash a thunderstorm right away, e.g. Triumph of Death, and quite literally warms up the crowd. Some who arrive later and miss this band are not amused about that at all…
Setlist: Chaos, Vicious Circle, Triumph of Death, Sothis, Wings, Dark Age, The Crucified Ones, Send me Back to Hell, Cold Demons (and of course the Imperial March Outro…) 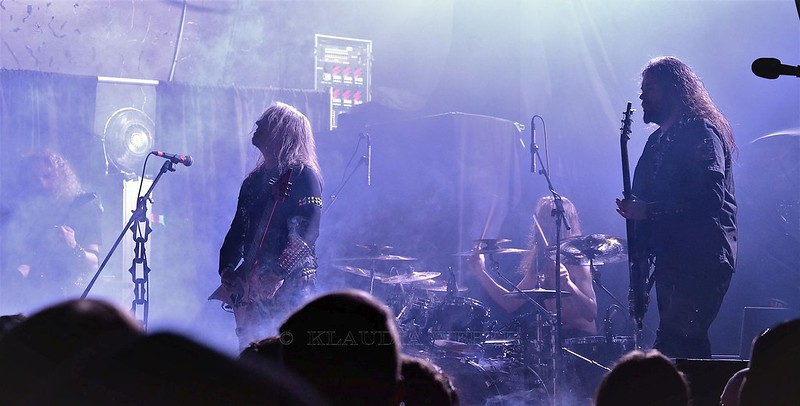 Annihilator are always a blast, and such a long time since their last gig in Helsinki…  T-Shirts and various social media comments illustrate that quite a number of people have been waiting for this Canadian string wizard Jeff Waters and his international gang (Fabio Alessandrini (drums) from Italy, Rich Hinks (bass) from UK & Aaron Homma (guitar) from Canada). This time there’s not so much time to enjoy the variety of Jeff’s facial expressions as he has taken over the lead vocals as well – and he’s not bad at it at all. Plenty of action and grimaces anyway, though, in this power trip through memory lane. But how can Jeff handle the legendary “Alison Hell” chorus? Well, he simply doesn’t and hands this job over to the audience! Sooo much fun, and it seems the show is way too short. Please, Annihilator, keep the promise to come back very soon, maybe later this year!

A quick set change and blessing of the microphones with Sacred Sage, and then the chieftains of the evening storm the stage. The signal for an even bigger mosh pit than before to get started ….  Testament have been a highlight of every festival, but it’s been a while since I have seen them headlining a club gig… And such two-hour service provides room for those excellent musicians – Eric Peterson (Guitar), Steve Di Giorgio (Bass), Drummer Gene Hoglan –  to present themselves solo. I appreciated e.g. Alex Skolnick quoting Hendrix’ Voodoo Child. 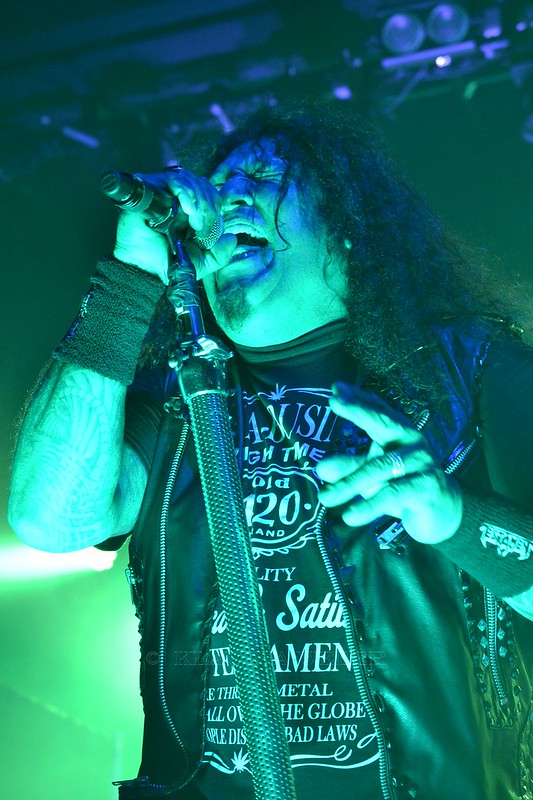 Wait, no, Chuck Billy doesn’t sing us a solo aria – but he entertains us with cheerful announcements and anecdotes “back then in the Bay Area”. The band offers a special treat, a song they have never played live in Europe – “Low”. Creating a set list, so Chuck tells us, is no easy task with such an abundance of Thrash hits, and the focus here is some  “old stuff”, which the audience appreciates. My personal all-time fave “Burnt Offerings” would have been the cherry on the cream topping – still, nothing to complain about, it was a blast (quite literally sometimes). Thank you, and see you again, hopefully soon!