The first show of the Finnish “Hope” anniversary tour in Lahti did not attract as many people  – well, at least at first – as I had expected. Which might be caused by a) being a Thursday b) a miserable weather situation. It should turn out I was not the only one travelling from Helsinki to Lahti for this gig (which is actually quite easy and inexpensive even via public transport).

didn’t have as much audience as later the headliner, and it looked even worse than it was because pretty much everybody hang out in the bar zone, further away from the stage… The band from Kouvola delivered an intense Doom & sadness show with examples of all their previous releases plus their brand new single “Rising Tide”. The singers Ville Rutanen and Anni Viljanen (start photo) impressed solo and as duet. Actually I was so fascinated I totally forgot about taking a photo of the whole band … Due to the length of their songs only Funeral, Tormented, Journey, My Curse and Rising Tide  fit into the 40-min-set.   https://www.facebook.com/RedMoonArchitect/

You could hear that this act gathers Finnish occult-rockers Babylon Whores’ mastermind Ike Vi and an all-star-ensemble (e.g. Pätkä Rantala – HIM, Spiha, Janne Immonen – Ajattara): Different styles are mixed quite effortlessly, Goth-Rock, Alternative, AOR and Swing orchestra with a cinematic sound and dramatic presentation. What I try to say – their music could fit nicely to Tarantino- or Bond movies. Or: a musical written (and performed) by Nick Cave, Jyrki69 and Iggy Pop might sound like this. I have to mention the 3 “Furies” Hanna Wendelin, Nelli Saarikoski and Tarja Leskinen who add to the trademark sound and who got a chance to perform at the front, too.  https://www.facebook.com/pg/sleepofmonsters/ 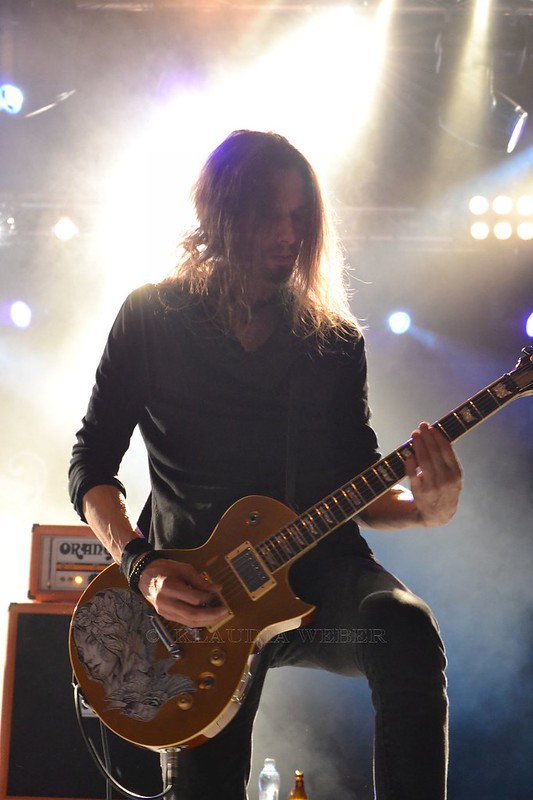 This is how you spot a popular band in Finland – the bar zone almost empty, everybody right at the stage. And on the stage – ooops someone missing? Well, keyboarder Aleksi Munter had announced weeks ago that he’ll quit, because of personal reasons, and he does not live in Finland any more. But what surprised me was the fact there was no replacement either, they managed the show with samples. Because there was not enough time for rehearsing with someone else, or a future permanent solution? In case of the latter, I have to say that the new song they performed in the encore section did work well, and it might hint to a rougher, rawer sound… I was glad to see Juha Raivio back who also looked a bit healthier than in summer at John Smith Festival.

What to say about this band – no matter how often I have seen them (and since early 2004 it has been a couple of times…) their music and their performance still induce gooseflesh, those gloomy songs have a rather uplifting than depressing effect, and you are simply taken into another world – even after a 70min set it seems they had just started and finish the set way too early. The Hope album was played in full: Hope, These Hours of Despair, Justice of Suffering, Don’t Fall Asleep, Too Cold for Tears, Empty Skies, No Light, No Hope, Doomed to Walk The Earth, encores were the new Night will Forgive, Deadly Nightshade and The Morning Never Came, which sounded to me much more progressive than I remembered…

The upcoming weekend gives fans in Seinäjoki, Turku and Kouvola the opportunity to see this package live – do not miss this chance!  https://www.facebook.com/swallowthesun/