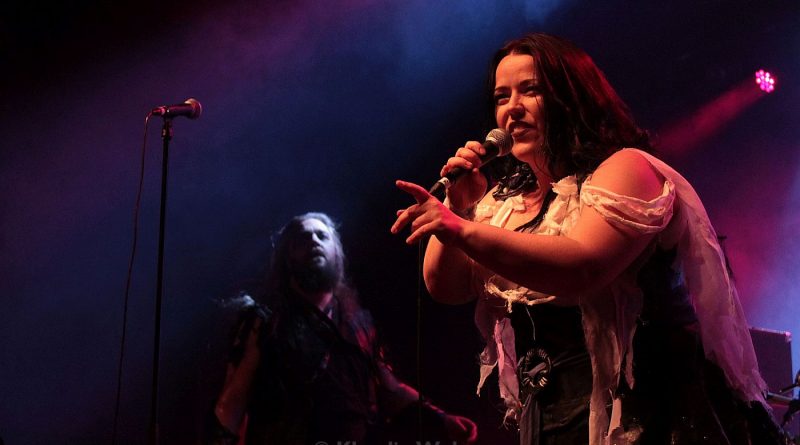 You can get lucky on a Friday 13th sometimes too, when for example you have an abundance of Folk/Melodic Death Metal bands in town on that weekend to choose from, and most of them featuring a female band member who contributes to their trademark sounds… Easy for me to choose this gig, though, and as expected the club was pretty full right after doors were opened, with a lot of die-hard-Folk-Metal fans anxiously awaiting the first band.

And they did not have to wait long for Crimfall, who naturally focused their set on their new album „Amain“ – here our review. Helena Haaparanta looked great in her stage outfit, like a Metal goddess, and no need to mention her vocal performance. Mikko Häkkinen proved himself once again as congenial partner in their „Beauty and the Beast“ vocal style (start photo). Great gig that somehow felt being a bit too short…
Setlist: Last Of Stands, Wayward Verities, Mother of Unbelievers, Frost Upon Their Graves, Until Falls The Rain

By the end of the set the hall had filled up even more, and many fans had obviously come specifically for this next band: Wolfheart. They kicked it off with some rough stuff, the opener of their current album Tyhjyys. I did not mind to hear the classic former opener The Hunt a bit later in the set when I was already done with photos… well, photos… it seemed those guys had decided to be „invisible“, mere shadow outlines, maybe out of solidarity with their (mostly hidden) drummer… great light show, yet a bit – err – difficult for snapshots, therefore not so many of them this time, as we had only 2 songs for shooting… A real surprise came for me towards the end, when mastermind Saukkonen himself spoke a few words, a sort of encouragement „when you’re struggling in life, there’s always winter coming up, and frost“ (in Finnisch: Routa). That can only sound encouraging to Finns, or White Walkers… However, the song Routa 2 is rather something to cheer you up… This set containing e.g. Shores of Lake Simpele, Boneyard, Strength And Valor, Aeon Of Cold, Zero Gravity, The Hunt, Routa Pt 2 seemed to end too soon, too.

And the club had filled even more during the Wolfheart show who had had their share of moshpits already. The following headliner Ensiferum induced even more expressions of enthusiasm so that I preferred to stay further in the back… and I have not seen so many bare male chests since the last Teräsbetoni-Gig … Ensiferum have played a good part of their current Two Paths: The Beginning Tour and maybe that was a reason why this show was flawless. A good mix of old and new in the set list, visual candy (lasers, steam cannons) and an abundance of fun on stage. The audience gladly cheered to every nonsense in between songs, e.g. bass lines from Funk to Metallica. And when Netta Skog had nothing to play on her accordion, she performed the lead vocals and proved her MC qualities (Feast with Valkyries). It is quite amazing that a band with soooo many years of history (so many records and shows) still delivers in such a fresh and energetic way! No wonder that the crowd was not satisfied until some encores incl. the inevitable „Lai Lai Hei“ were played.

My personal highlight was an almost private moment – sitting in the photo pit, waiting, near a monitor box – and then I hear an accordion following the guitar licks of the DJs choice – Iron Maiden’s Mariner – perfectly… Netta warming up… amazing, I have to check out her next solo show with Metal covers!