Macaroni Penguin Music (MPM) was set up in 2013 as a small Finnish based independent record label, taking e.g. care of band/gig promotion, management tasks, label and design work, music release, organising tours etc, and of course hosting their own concert series – like this night of insanity.
Why insanity, you might wonder as well as I did… and how far would “insanity” refer to the featured bands? Anyway, a motto interesting enough to find out what´s going on, despite the bad weather, and luckily quite a lot of people followed my example that night.

Well, the insanity presented itself first as incredibly cheap entrance fee (5e for 4 bands), and secondly, nobody knew which band was playing when, not even the bands or the organizers themselves – the performance order was literally pulled out of a hat… Quite exciting for everybody involved – and quite fun, hopefully not only for the audience. The winner of the opening slot was

Kalevi Kamasuttura ja Soitinyhtye Sikapillu
which turned out to be a pretty crazy bunch, featuring musicians who preferred to remain anonymous – yet his (fun) Punk / Hardcore / Rap mix with Finnish lyrics was not even THAT bad … Just kidding, the Finns put on quite a show, taking no prisoners – and almost destroying the stage in the process. They will soon release their “KATASTROFAALINEN” (= “catastrophic”) debut album, you can check them out here: www.facebook.com/sikapee

Bullet Control
were the next lucky winners with a quite impressive show that covered the style Rock, Metal, Alternative, Progressive – performed so passionately by singer Toni that a shoe got lost in the process – which definitely connects to the “insanity” theme of the night. This and maybe also this 2-people-moshpit that was going on for a couple of songs. www.facebook.com/bulletcontrol

Saatanan Marionetit
were actually the band I had been looking forward too – and indeed, their dark metal / black metal / goth was closer to my taste than the other bands. They displayed what I usually miss in black metal – humour. Be it by quoting Kotipelto and Judas Priest, hilarious sing-along parts or sarcastic comments – this was an absolutely entertaining experience, please more of it, and soon! www.facebook.com/saatananMarionetit

Musculus
had to wait the longest but also profited from more time to prepare for their show – maybe this is a reason for those quite elaborate outfits and make-ups? Slightly crazy outfits and a certain erratic behaviour, especially displayed by the vocalist (Keith Thompson in this case) are the factors which connect all four bands and also connects them with the insanity theme of this evening … Musculus´ music was rather based on a solid Rock´n Roll meets Stoner meets -core basis, to drive the audience crazy – in a “healthy” way. And the adventure-hungry crowd definitely enjoyed the grand finale of an insane party night. Check the band out at http://musculus.bandcamp.com/ 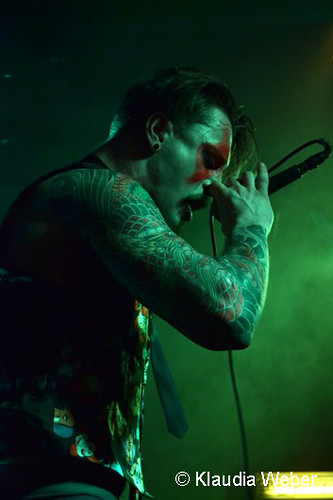